Who needs the espresso? These travel-friendly biscotti already come spiked 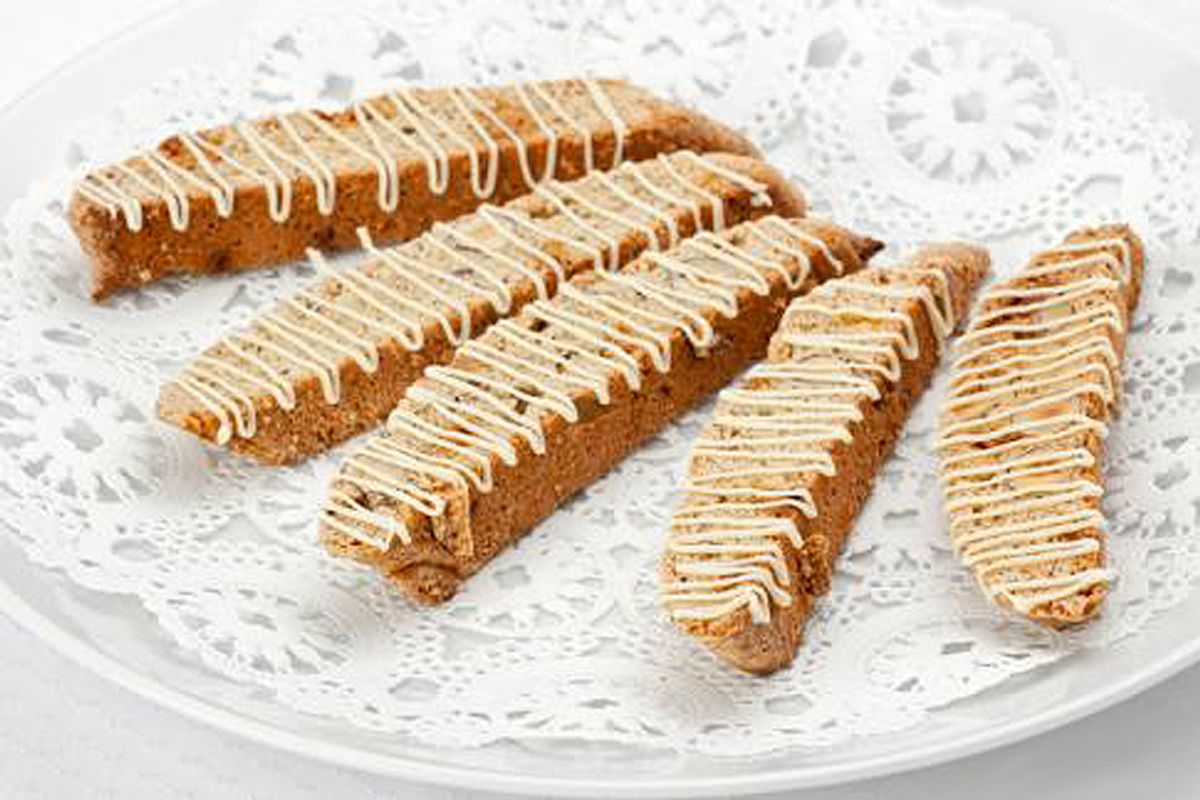 Claude was my first and only -- and I'm glad it was him.

He was a raffish blond who resembled a perpetually hung-over cross between Daniel Craig and Julian Assange. He spoke with a nearly incomprehensible French accent, which only added to his mystique. Women flung themselves at him, and he flung himself back at them with equal enthusiasm.

And he was the chef who hired me for my first and only full-time cooking job, in the pastry kitchen of an impossibly snooty beach resort in California. There, he showed me a strategy for making biscotti -- twice-baked Italian cookies -- that I'll never forget.

I have no idea why Claude chose to hire me. Perhaps nobody else applied for the job. Or maybe nobody else applied who could pass the hotel's strict background checks and drug tests. In any case, he was the only chef among dozens I contacted who was willing to take a chance on a freshly minted culinary school graduate who was 1) nearing middle age and 2) whose most recent job title was "Teaching Postdoctoral Fellow."

But that wasn't the only reason I was lucky to be hired. Claude had worked under several three-star Michelin chefs and had won numerous awards for his desserts. This was precisely the kind of chef I dreamed of working with. Someone who was serious about pastry. Someone who could teach me everything.

And I found out way more than I wanted to know.

"Ah," he said during the pastry team's 10-minute morning break one day, shortly after I started. "Tomorrow I go back to Las Vegas. I will finally get my driver's license back!"

I knew that he had previously been the lead pastry chef at a luxury hotel restaurant in Las Vegas, and that he still owned a house there -- but the driver's license bit, I didn't get.

"Oh, what happened to your driver's license?" I asked.

He hemmed. "Eh. It is complicated."

Back in cooking school, the instructors' mantra was "the chef is always right!" Chefs, they warned us, were like four-star generals: They were not to be questioned, challenged or, God forbid, mocked. Ever.

Apparently, Claude's pastry team never got that memo. And neither did Claude -- he just kept on feeding us ammunition for our relentless barrage of jokes (most of which went over his head) and (usually) affectionate teasing. The DUI was just the start of it.

"You know what ze womans like at Hennessy's?" he said one day, referring to his regular watering spot. "When you bring zem tacos from ze bar. Without zem asking."

"So, wait -- you introduce yourself to women by buying them tacos from the bar?" Mike asked.

"So you bring these girls tacos that are already theirs for the taking and you expect them to be all impressed?" Renata, another cook, asked incredulously.

"Allo, my dahling," purred Mike in his best French accent. "I bring you tacos from ze bar. Zey are free! Now weel you come to bed wees me?"

Claude was -- in his own words -- "a very bad boy." But he treated us women in the pastry kitchen with perfect courtesy. Ditto the team’s guys. When he showed up every morning (usually hung over), he'd solemnly circle the room and shake our hands. When our shifts ended, he made a point of shaking our hands again and thanking us for our work.

By this time -- late afternoon or early evening for those of us on the day shift -- it was often clear that he'd taken a generous swig or two from the bottle of Jack Daniel's he kept in his locker. But where his team was concerned, his professionalism never wavered.

As for women outside the pastry department, all bets were off.

"EEEE!" she'd squeal in reply. Whether she squealed from pleasure, embarrassment or bemusement with Claude's mangled Spanish was anyone's guess.

Claude knew he couldn't treat women employed by the hotel the same way as those he found at Hennessy's. And female hotel employees were smart enough to keep their clothes on around him, at least while in heavily trafficked areas. But then, a brief and wondrous window of opportunity opened for him: He was offered a job back in Las Vegas by one of his Michelin-starred mentors, and he promptly gave his two-weeks' notice.

Now what could hotel management do, fire him?

On his last day at the hotel, Elizabeth was at the dish sink when Claude approached her with a napkin-covered plate and a big grin on his face. "I make zees for you!" he announced proudly.

Elizabeth dried her hands on her apron, pulled off the napkin -- and jumped back screaming.

The rest of us ran over to the sink and stared at the plate, which was now on the draining board.

Smack on the center of the plate sat an anatomically correct, slightly larger than life-size penis baked of biscotti dough. Because Claude was a consummate professional, he had carefully rolled the thing in sugar before baking it, just as our recipe required. And because he was Claude, he had decorated it in great detail with several kinds of chocolate.

I hope I never see white chocolate used that way ever again.

It was easy to see why Claude chose biscotti dough as the medium for his project: we always had tons of it at the ready. Biscotti are great cookies to make during the holidays because they travel and keep well (both the dough and finished cookies can be made ahead). They're also cute -- when made normally, they look like little slices of bread -- and they taste great.

Biscotti are traditionally served as an accompaniment to coffee. But recently, I discovered biscotti that were actually flavored with coffee, and they were addictive. Here's my version of coffee biscotti, studded with hazelnuts and topped with a safe-for-work drizzle of white chocolate.