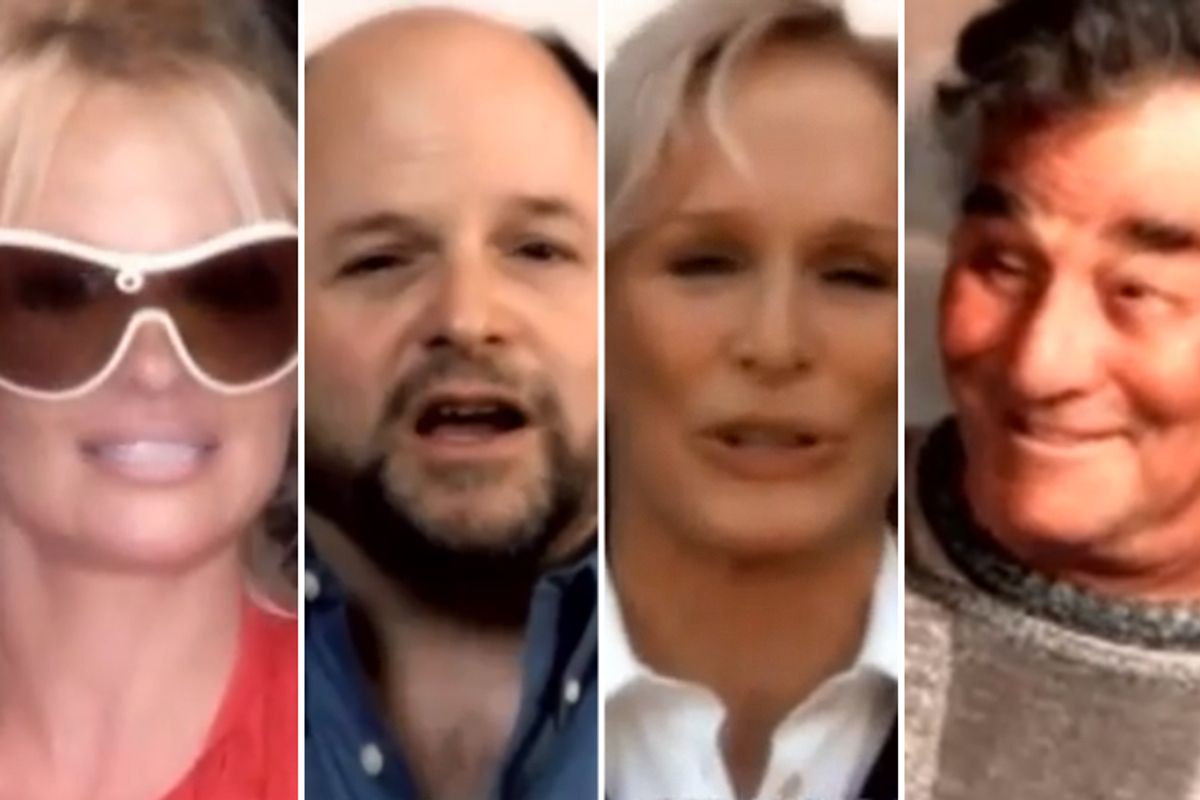 If you were on the Internet this weekend, you may have seen what has to be one of the weirdest, most delightful and certainly most impressive viral videos to emerge in a very long time. An onslaught of '80s and early '90s stars, from Steve Guttenberg to Right Said Fred to the "Twin Peaks" ladies to Tonya Harding (Tonya Harding!), lip- syncing to a bad "We Are the World"-style cover of "Let It Be" on a green-screened beach. If you haven't seen it yet, it's never too late. Take a gander here:

We could watch that a million times. Although it wasn't new to the Web, the video started making the rounds late Friday afternoon, and was the talk of the Salon offices for the last few hours of the work week. "This is like the unconscious cast of characters parading around the brains of one specific generation of pop culture consumers," one colleague observed in an e-mail.

Which, it turns out, is precisely the point. As people discovered over the weekend, the video isn't just an excuse to put a bunch of random washed-up celebrities together in a Beatles video: It's a commercial for "Gylne Tider," a popular program on Norway's TV2 network. Hosted by Oyvind Mund, Steinar Martinsen and Ingar Thorsen, "Gylne Tider" ("Golden Days") is "I Love the '80s" as a travel documentary. Clad in their trademark matching red sweat shirts, the three hosts travel the world in search of their favorite bygone celebrities; the current fourth season features episodes dedicated to Huey Lewis, Pamela Anderson, Jason Alexander and Ricki Lake, among others.

But how did the "Gylne Tider" guys get so many stars to appear in their commercial? Several of the video's celebs appear in episodes of the show, but according to at least one participant, trickery may have been afoot. The Hollywood Reporter reported this morning that actor David Faustino, who played son Bud Bundy on "Married With Children," claims the Norwegian trio got him to be in the video by saying it was for charity. No other celebrities have corroborated his story so far.

In watching this, we also couldn't help thinking of Matt Zoller Seitz's weekend slide show of best and worst uses of Beatles music in popular culture, and where this "Let It Be" cover might fall. A beautiful, profound anthem at face value, "Let It Be" has become so overused and clichéd that at this point it's hard to think of it as anything but a parody of itself -- and this most ironic of contexts certainly doesn't help.

The Web parodies have already begun to trickle in. Cracked.com put together its own take; it's a pretty accurate subtitled representation of our own experience watching the clip. ("Wow, George Wendt really does not want to be here." "When Bud Bundy is pointing at you twice, you should know that something is amiss.") Enjoy below -- along with the "Gylne Tider" cast's epic rendition of "We Are the World."

If the WTF "Let It Be" Video Had Honest Subtitles -- powered by Cracked.com