What do turtles, rabbits and birds have in common? Plus: Fact-checking the New Yorker 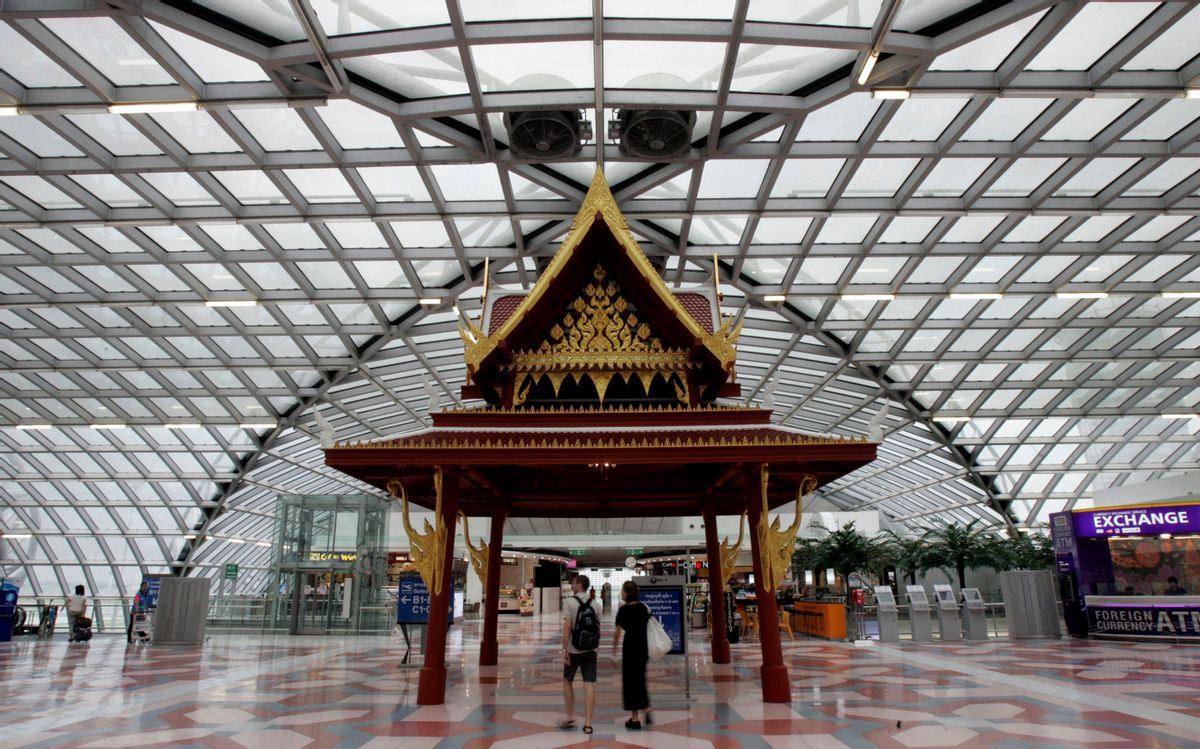 In this photo taken Tuesday, Sept. 8, 2009, two tourists stroll past a Thai-styled pavillian at departure hall at Suvarnabhumi International Airport in Bangkok, Thailand. The Tourism Authority of Thailand is offering five couples fully paid trips to the country's most popular cities and beaches. In return, they will be asked to blog, chat and tweet about their holiday in a bid to win a grand prize of $10,000, a BlackBerry and a video camera. Thailand's tourism industry is facing its worst crisis in years, with foreign arrivals down 15 percent so far this year because of political upheaval and the global recession. (AP Photo/Apichart Weerawong) (Apichart Weerawong)
--

Back in October I made my second visit to the new Suvarnabhumi Airport in Bangkok, Thailand. It was just as I remembered it from my earlier visit in 2008 -- which is to say, magnificent.

Suvarnabhumi might not have the amenities of Singapore's Changi or Seoul's Incheon airport, but its central terminal is the most visually spectacular airport building I have ever seen. At night, approaching by highway from downtown Bangkok, it looms out of the misty darkness like a goliath space station -- a vision of glass and light and steel, its immense transoms bathed in blue spotlight.

The only thing is that name, Suvarnabhumi, which is pretty much unpronounceable by anybody who doesn't speak Thai.

I would love for the great Paul Goldberger, the Pulitzer Prize-winning architecture critic for the New Yorker, to do a series on airports. He could find worse places to start than Bangkok.

Nothing in the U.S. or Europe comes close, and by comparison our attempts are half-assed at best -- JetBlue's wildly overrated new building at JFK, for example.

What JFK Airport lacks in world-class architecture it makes up for in ... wildlife?

I've written before about the Jamaica Bay Wildlife Refuge, a 9,000-acre section of the Gateway National Recreation Area that abuts the airport's southern side. A few months ago, taxiing in from Runway 22R, an osprey whizzed past our aircraft, just in front of the cockpit. It couldn't have been more than 20 feet away, with a fish clutched in its talons.

Slightly less exotic are the birds -- namely sparrows, starlings and pigeons, that live inside JFK's terminals -- most notably in Terminals 2 and 3. Not long ago I saw a pigeon sitting in a drinking fountain in Terminal 2.

One day this fall I was at the controls of a 757 on the final approach to Runway 22L. We were at 50 feet or so, just over the threshold, only a few seconds from touchdown, when a gray rabbit came dashing across the runway, right-to-left. It was only in view for a moment or two, but it was clearly a rabbit, and it was running like its life depended on it. And obviously it did.

I'm pretty sure it made it, but not by much.

Then there was this.

Speaking of rabbits, the airport in Brussels, Belgium, is infested with them. When I flew cargo planes for DHL, we would leave out of BRU late in the evening, and the taxi lights of our DC-8 would illuminate huge swarms of rabbits all along the taxiways and at the ends of Runways 25L/R.

Not all of them were alive, having been crushed by airplane tires. I imagine a few turbofans, too, had their taste of rabbit stew from time to time.

Have you ever taken a good look at a jet bridge -- or "Jetway," to use the proprietary term -- that strange umbilical that connects terminal to fuselage? There is nothing else in the world that looks like one, but what really strikes me is how ridiculously overbuilt they are. Do we really need all of that metal and cable and wire and hydraulics for what, at heart, is a simple gangway?

Of course, I am opposed to jet bridges on principle. I'll take the classic, drive-up stairs any day. You'll still find the old-timey stairs at many airports overseas. I always get a thrill from them. There's something dramatic about stepping onto a plane that way: the ground-level approach along the tarmac followed by the step-by-step ascent. The effect is like the opening credits of a film. It's a brief, somewhat ceremonial introduction to the journey -- and to the airplane itself. You don't get that from a windowless tube. With the jet bridge, the plane itself is almost irrelevant; you're merely in transit from one sterile interior space (terminal) to another (airplane cabin).

A number of gates at Amsterdam's Schiphol airport have unusual boarding bridges with access to both front and rear doors. The passageway actually extends over the airplane's left wing and all the way to the aft-most door.

The New Yorker is arguably the country's best and most carefully fact-checked magazine, and is home to two of my favorite writers -- the aforementioned Paul Goldberger and the film critic Anthony Lane. (I have at most a passing interest in either architecture or film, but I will read anything either of these two men bothers to produce.) But what's this, a mistake? In the Aug. 16 issue, Page 89, in a review of the book "Roadside America," we're told about an Atlanta area restaurant built from the recycled fuselage of a "DC-7 jet."

The DC-7 had four propellers powered by reciprocating engines. It predated both jets and turboprops.

And now in the Dec. 6 issue, Gay Talese is trying to tell us that it takes 16 hours to fly from Madrid to Buenos Aires.

Music: If it seems that I'm looking for excuses to pick on the New Yorker, maybe that's because I'm still irritated by Nick Paumgarten's giddy valentine to Elvis Costello that ran a few weeks ago.

Now, dissing Elvis Costello is in many ways the musical equivalent of dissing the Lockheed Constellation or the DC-3. "Serious" rock fans just won't have it. But I can't help it. For as long as I've been listening to music, the sound of even a single note from any one of Costello's songs instantly causes my toes to curl and my blood to boil. These were the songs heard at college dorm parties in 1986, their adenoidal choruses and pinched little couplets slobbered over by teenage girls who'd had a few too many wine coolers.

Moreover, I find it nauseating the way his songwriting skills are spoken of with such pompous reverence, at the expense of other post-punk Brits whose lyrical cleverness could run circles around Costello's. Take the early and mid-career work of Billy Bragg, for example. (Bragg's proletarian garage-folk and prickly love songs weren't just smarter, they had balls.) Or, to the north a bit, try the sweet and sour poetry of Roddy Frame, of the long-forgotten Scottish band Aztec Camera.

Allow me to close with a sales pitch. I normally stay away from product endorsements and pitches, but today I'm making an exception for two reasons. First, the product is really cool. Second, the product is mine.

Christmas is coming, and the perfect gift for the frequent flier on your list is a stylish T-shirt or baseball cap from the Ask the Pilot ensemble of fine fashions. Shirts and caps are now only $15, including shipping (U.S. $20 for all international orders). Plus, for the next week only, it's buy one, get one free. Order any shirt or cap, and get a second shirt or cap at no extra charge! Two shirts, two caps, or one of each ... your choice.

(The order form will only process one item, so please include a note specifying which product and size you'd like for the freebie.)