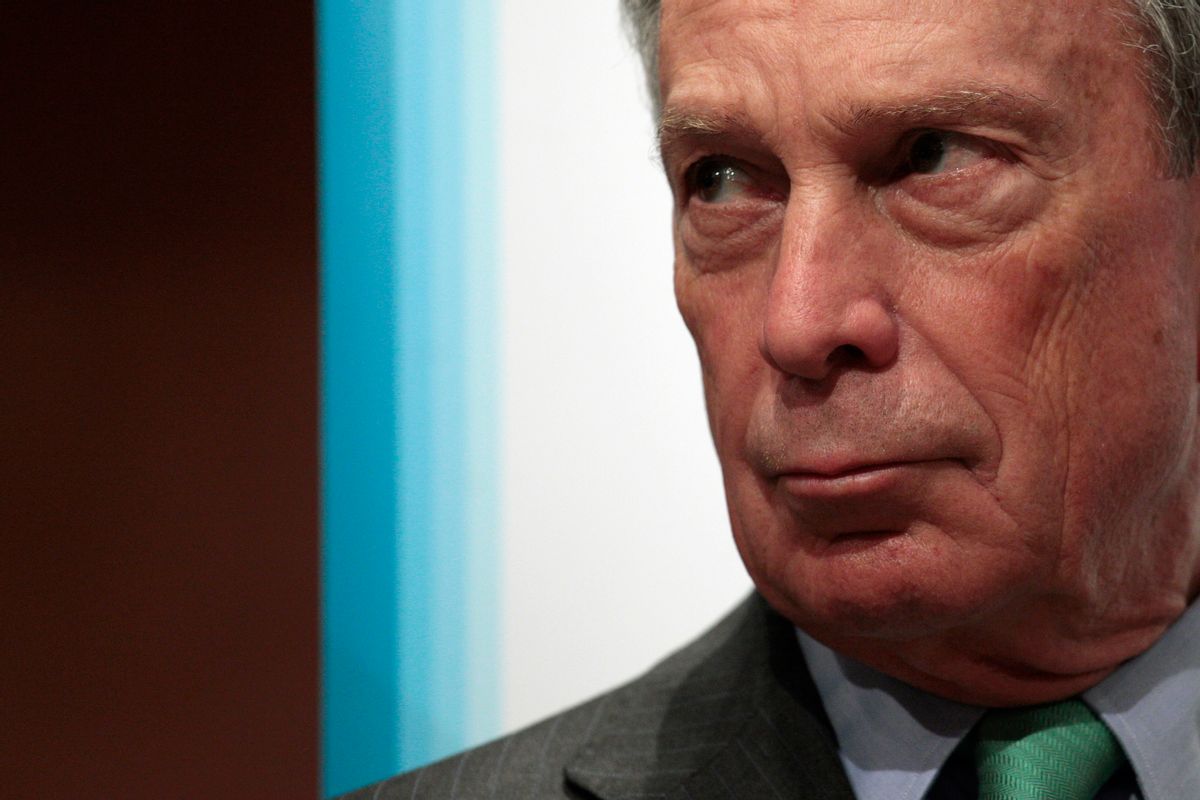 Billionaire plutocrat Michael Bloomberg delivered a "major speech" this morning about his multiple-point plan to fix America, economically. Bloomberg calls on Washington to "chart a middle way," directly in between Republicans and Democrats, because Democrats and Republicans are ideologues, unlike centrist Michael Bloomberg, a man whose reasonableness is self-evident, because he spends a lot of time telling people that he dislikes both liberals and conservatives. (And bloggers, and journalists, and union leaders, and bureaucrats, etc., etc.)

If the federal government wants to get America back to work, both parties must listen to Michael Bloomberg and immediately begin implementing his plan of less financial industry regulation, more corporate tax cuts, and stimulative platitudes about partisanship and "common sense solutions."

"It's time to take a step back and ask ourselves: when did success become a bad word in America? When did cooperation in government become treason? The new ‘politics as usual’ is making a mockery of our democracy -- and a mess of our country. We’ve got to stop it -- because we're paying a heavy price. In fact, right now, we are falling behind the world in education, technology, economic opportunity -- even life expectancy.

"This can’t go on. We’ve got to pull together, and focus on what’s important for America – and then roll up our sleeves and fix the things that need fixing. This is the greatest nation on earth – the Shining City on the Hill as Ronald Reagan called it. And I believe, as Bill Clinton said, that there is nothing wrong with America that cannot be cured by what is right with America."

Yes, when did success become a bad word? It must been while I was on vacation or something, because I have seriously never seen anyone who wasn't being sarcastic use the word "success" pejoratively. (Oh, look, I just stumbled upon the secret first draft of that second paragraph: "Shining City on the Hill, nothing to fear but fear itself, ask not what your country can do for you, it's the economy stupid, malaise, return to normalcy, Tippecanoe and Tyler too, 'where's the beef.'")

So! It's time to roll up our sleeves and get to some bipartisan solution-seeking! First, we'll ... slash corporate taxes. We cannot "tax-and-spend" our way out of this mess, because while that was all well-and-good for the extended period of our nation's greatest economic prosperity, nowadays we must coddle and reassure wealthy job creators until they are comfortable and unafraid enough to begin "innovating" us some jobs.

We must also be careful not to go too far with our "financial regulations," because we don't want to cripple the industry that is hoarding all of the money and periodically destabilizing the entire world economy.

Also we need to work on that darned deficit! "The Deficit Reduction Commission offered a good start," Mayor Mike said, "but it’s disappointing that Congress is choosing not to debate its recommendations." (Congress didn't "choose" anything. The commission itself couldn't get enough votes for its package to even send it to Congress to be debated. But whatever, Michael Bloomberg has demonstrated plenty of times that he either doesn't understand how American politics work or he pretends not to in order to take shots at those jokers in Congress.)

As Ben Smith points out, the entire Bloomberg economic plan is basically the U.S. Chamber of Commerce's platform, plus something about job training. Maybe the government can train unemployed construction workers to sign off on their own foreclosure notices without reading them.