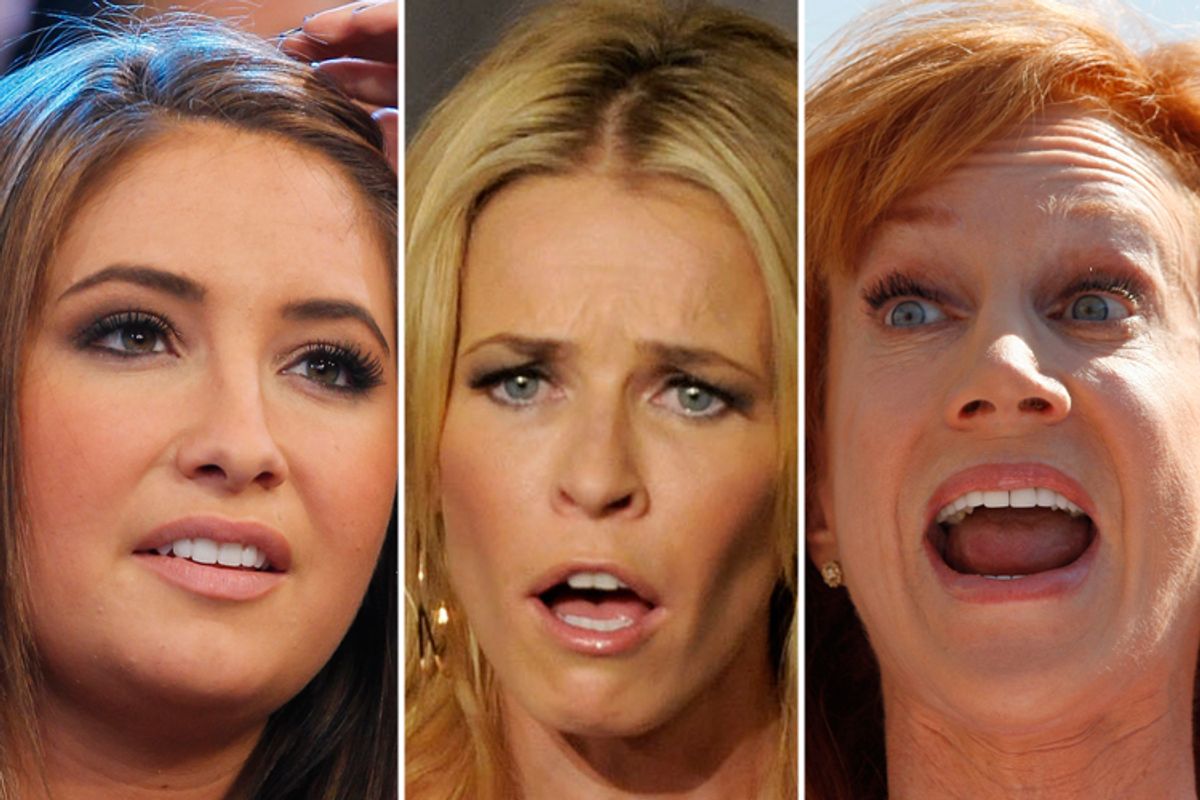 That girl is so fat. Her mom is totally the boss of her. That one is such a man-stealing ho. And that one is such a lesbian. Welcome to the middle-school lunchroom. Sorry, I mean the week in famous female entertainers.

In a slew of public outbursts, Kathy Griffin, Margaret Cho, Bristol Palin and Chelsea Handler have been tossing around public barbs over the past several days with all the enthusiasm of a pack of tweens at a Bieber stampede. And fascinatingly enough, they've mostly done it in the name of, of all things, friendship.

Margaret Cho kicked things off with a deceptively chummy-sounding entry about "Dancing With the Stars" in her blog. "Everyone was trying to pit me against Bristol," she wrote, "but the truth is, we got along well. She never asked me to baby-sit Tripp or anything like that, but I consider her a friend." As anyone who's ever spent a lunch period crying in the girl's room knows, "I consider you a friend" is a segue into something you don't want to hear. In this case, it wasn't a direct dis on Bristol herself, but the jibe wasn't too hard to find. She wrote, "I heard from someone who really should know that the only reason Bristol was on the show was because Sarah Palin forced her to do it. Sarah supposedly blames Bristol harshly and openly (in the circles that I heard it from) for not winning the election, and so she told Bristol she 'owed' it to her to do DWTS so that 'America would fall in love with her again' and make it possible for Sarah Palin to run in 2012." Bristol Palin, a young woman old enough to vote and raise a child, was "forced" to rumba on national television for the sake of her mother's career. What is this, "Toddlers & Tiaras"?

Bristol naturally immediately took to Facebook with her response, saying, "I was somewhat taken aback to read about me in a blog by my friend and fellow contestant, Margaret Cho." She explained that she did indeed want to make her parents proud, but that was the extent of it. And then she added, "If you ever have a question, call me girlfriend … if you understood that commonsense conservative values supports the right of individuals like you, like all of us, to live our lives with less government interference and more independence, you would embrace us faster than KD Lang at an Indigo Girls concert." Ah, yes, work in a weak lesbian joke, because Cho is an outspoken champion of gay and lesbian rights and she danced "Copacabana" as a statement of pride after a slew of teen suicides. Man, what a butch. Take that, girlfriend.

Though Cho responded that she stood by her remarks, it wasn't long before Bristol received another big blast of attention from a high-profile comic. This time, it was Kathy Griffin, who during a salute to the troops, ragged on Palin's "DWTS" weight gain, noting to the boos of the audience that "She gained like 30 pounds a week, I swear to God, it was fantastic. She's like the white Precious."

Bristol, never one to let anything slide, quickly responded to Fox, "The audience's reaction to this 'comedian' spoke volumes, and the decent people I know would probably have booed her, too. I hope people didn't have to pay money to hear her negativity and criticisms." That's right, according to Palin, Griffin is a "comedian" only in the scare quotes sense of the word. Well, at least neither of them had to pretend they were being friendly and constructive.

Then, just as a wounded nation was healing from all things Bristol Palin-related, another comic, Chelsea Handler, stepped up and delivered a diatribe against another high-profile mother: Angelina Jolie. During a stand-up routine in New Jersey over the weekend, Handler, who is famously besties with Jennifer Aniston, referred to Jolie as someone who "stole someone's husband," "When a woman says I don't have a lot of girlfriends, you're a cunt," she explained. "You're a woman. You need to have women friends. You have to have women friends, otherwise you're evil." Ah, yes, because if we've learned anything this week, it's that women always treat each other so well. Cho, Palin, Griffin and Handler -- who wouldn't want any of that lot on her side?

I hate the blanket assumption that women have to stick together on all things, and that calling out a fellow female is somehow a betrayal to The Movement. If she's got it coming, let her have it. Entertainers make their livings observing the behavior of public figures and poking fun at them. That's why they're entertainers. Cho, Griffin and Handler can't be entirely blamed for doing what they do -- even if the famously brutal Griffin joke did fall flat, and Palin shouldn't try telling jokes at all.

But it's those sideways references to friendship, those vague allusions to sisterhood that ring so hollow and false. And if what she's got coming is just that you don't like her mom, or she dares to support gay rights, or her weight fluctuates, or she's putting it to a really good-looking man, that's actually not sufficient grounds to get your hate on. It's cheap and it's juvenile and definitely has zero to do with anyone's qualifications as a friend, woman or human being. I'm just mentioning it because I care, girlfriends. And all that passive-aggressive crap makes your butt look huge.