What it's like to eat only potatoes for 60 days, Part 2 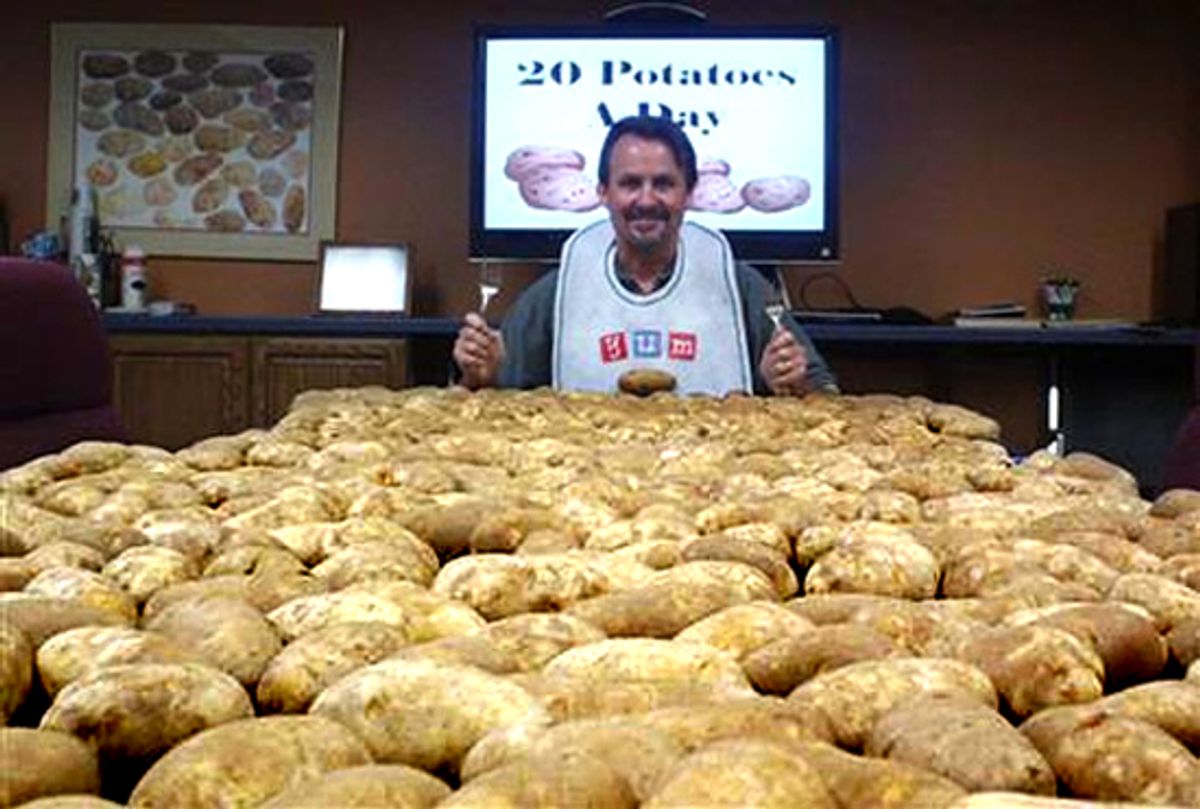 When we last left our hero/culinary guinea pig Chris Voigt, executive director of the Washington State Potato Commission, he was nearly halfway done with his 60-day all-potato diet, a feat intended to demonstrate the vast nutritional powers of the potato. Because if there's something that will sell you on a food, it's some guy going, "Watch me eat tons of this all the time and not die!"

Even after a month he was energetic and spry, with remarkably lower cholesterol, but, as you might expect, matters of the body and matters of the mind are not so simple. That is to say, he was going bonkers from eating nothing but seven pounds of potatoes each day, desperately finding no-calorie ways to flavor them and hitting bottom when he stole a co-worker's packets of Taco Bell hot sauce. He posted on his blog distressing cries for help like, "One of those days where you really wonder what the heck you're doing. While I know I love potatoes, it was hard to keep eating them. I hung in there but I was the star of my own little pity party yesterday."

And what did we do? Sit back and enjoy his descent into madness, of course! And now, enjoy part two of Chris Voigt's trip to gustatory purgatory.

I just got back from my first trip away from home while on this diet. Must remember to prepare better! Nearly starved! I broke into a small emergency stash of instant potatoes I had with me for breakfast, had 3 small bags of chips and 1 baked potato for lunch, and an order of fries at McD's for dinner.

Ah yes, travel, when you see the breadth of the world, when you stretch the boundaries of your imagination, when you immerse yourself in other cultures and live and breathe and taste the way they see the world. Or when you cash out your emergency stash of mashed potato powder. :(

It was career day at my son's school yesterday. We talked about how plants grow, where potatoes originated from, and we cut open a bunch of different varieties to show them what they looked like inside. When my son is asked about what I do for a living, his response ... "He eats potatoes."

A few days before this, Voigt referred to his son as his "little spud," and I worried for the boy, figuring it must be a hint that he intends to eat him. People laughed at me. But look at this contemptuous resentment! This is a proud, crazy-proud man, and his son denigrates him so. You won't be laughing when you read the whole shocking story in the paper, people.

I want to move to Ireland! If anyone knows how to speed up plate tectonics so that we can get Ireland closer to the Pacific Time Zone in the US, please let me know!

OK, maybe he's given up on travel completely.

One of my co-workers has this incredible mom who brings in all sorts of goodies. Today it was Halloween treats for all, even me! Thanks Sandy for the Spuds! I held a cupcake to my nose while I ate my potatoes to see if I could trick my brain.

I remember once, when I had a headache -- the kind of headache where all that exists in the world is throbbing pain, where it feels like your skull is about to split open and maybe you'd prefer it that way -- I thought about punching a wall to distract myself from the hurt in my head. I decided not to, because it would have been stupid. But it would not have been nearly as heartbreakingly sad as this.

The meeting planner went out of her way to make sure the banquet staff provided me potato dishes that were acceptable to my diet. LOL, it took them a little while to figure it out. Their first try was a potato quiche, told them I couldn't eat it so they next brought out mashed potatoes made with butter and milk. Already starving and unwilling to wait for another round of something I probably couldn't eat, I said, just throw a bunch of spuds in the microwave and bring them out. They happily complied. :)

Yes, but probably not before they spit all over your lunch.

Just in case I'm subjected to a lie detector test at some point, I have to come clean on 3 incidents. There were 3 separate times in the previous 50 days where I was making my kids lunch, peanut butter and jelly sandwiches, and without thinking, it was more of a reflex move, I licked clean the peanut or jelly that had gotten on my fingers. Its been bugging me so I needed to share.

OK, so my excuse is that I was out of the country with family when he posted this, but for all the people who have been reading his blog: How did no one put this man on a suicide watch? Is this not a "now I lay me down to sleep" moment?

Tomorrow is a special day at our little office. My co-workers have decided they will join me for one day of eating just potatoes! This moral support will help me as I head into our Thanksgiving holiday.

But later, in the comments, he notes:

Maybe we're rushing to judgement on the supportive attitude my co-workers have in my office. I thought I smelt a latte on someone's breath!

The first rule of brainwashing is: You demand absolute purity.

Not sure if you noticed, we posted a new video. I can't say who's in it because of the restraining order, but I think you might recognize him from one of the past Olympics or maybe as the winner of Dancing with the Stars.

OK PEOPLE, HE JUST TALKED ABOUT A RESTRAINING ORDER.

Many folks are wondering what I'm going to be eating for Thanksgiving. Well, the obvious answer is potatoes. But with a twist! Instead of a juicy tender turkey, I will be eating mashed potatoes that were shaped into the form of a turkey by my two kids. We will then brush the fake turkey with some oil and put it in the oven so that it will have a nice brown crisp skin, just like a real turkey. And of course my vegetable of choice will be mashed potatoes with fake gravy. We will be making fake gravy out of a bouillon cube and will use potato starch to thicken it up. And for dessert, fake pumpkin pie! We'll take some mashed potatoes, again, and color it orange with food dye, add some pumpkin pie seasoning and put it into a pie pan. Yummy!!!

Staying up late tonight, the last night of my diet. I'm doing several interviews, a couple for the BBC and one in Ireland. The diet will end in about 20 minutes. So I'm thinking about what tomorrow will look like ... a return to other foods. And all of a sudden I get this weird vibe ... like I'm not going to be able to break away from my potato diet! Kind of like a version of the Stockholm Syndrome where I have bonded with the captor I've had for the last 60 days and I can't leave him ... or maybe its a her ... doesn't matter, the point is I'm not sure I can stop. It reminds me of the quote from the Kevin Costner movie, Bull Durham, "A player on a streak has to respect the streak". I have a 60 day streak going. Its going to be a little weird to break it. LOL, instead of a physical exam today, maybe it should have been a mental one!

It's funny because I still have yet to eat something else besides potatoes. I've been a little busy this morning so I wasn't able to pack a lunch or breakfast. But the fridge in our office still had a couple of my potato only dishes. So guess what I had for my first meal at the end of the diet. Potatoes! Hopefully that will change later today. And I bet there will still be potatoes tonight, but with something on them or with them!