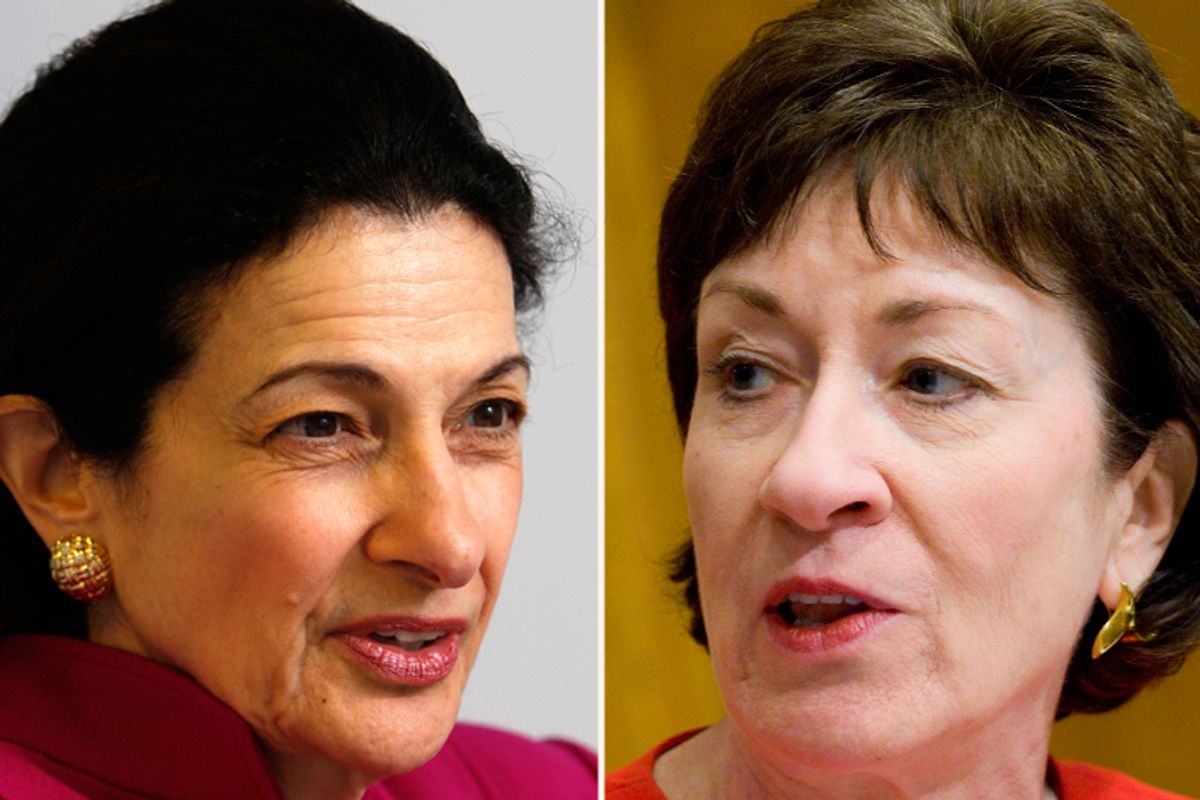 Maine's moderate Republican senators, Olympia Snowe and Susan Collins, are again proving themselves to be totally reasonable people whom you can always rely on to negotiate in good faith. Today Olympia Snowe is killing the DREAM Act and Susan Collins is strongly considering blocking the repeal of "don't ask, don't tell."

The DREAM Act provides a lengthy and fairly arduous path to citizenship for people who immigrated to America as children and then attended college or served honorably in the armed forces, providing they spend a decade on their very, very best behavior. Olympia Snowe has come out against it. Because there are too many immigrants:

"Millions of illegal immigrants could attempt to become legal residents as a result of this proposal, according to some estimates, and it is incumbent upon the Senate to ensure our policies never again lead to a situation where we are confronted with upwards of 12 million illegal immigrants residing within our borders."

Yes, according to "some estimates," millions of people "could attempt" to become legal residents. That is the point of the legislation. To allow people to stay in America legally, instead of illegally, if they do things that are considered beneficial for the country as a whole. According to real estimates, a couple hundred thousand people would be eligible to apply for "conditional lawful permanent resident status" immediately, and many more people would eventually be eligible to apply for that status should they meet certain conditions.

But Olympia Snowe does have a really good point: If the Senate refuses to act on this issue, all of the immigrants will probably just go away.

(John McCain, who used to support a much less restrictive version of the DREAM Act, now opposes this one, but no one expects anything but embittered betrayals from that old codger. Snowe is supposed to be a reasonable person.)

Meanwhile, there are 60 votes for the repeal of "don't ask, don't tell." Supposedly. But there is still a very good chance it will not happen, because of Maine Sen. Susan Collins.

While Collins strongly supports allowing gays and lesbians to serve openly in the armed forces, she even more strongly supports the right of Republican senators to offer unlimited pointless amendments to the defense authorization bill in order to delay its passage until a more conservative Congress is in session and repeal is off the table for possibly years.

So she's been in tense negotiations with Harry Reid, who is promising "15 amendments, 17 hours of debate, and room to negotiate more." That is not enough for Collins.

Harry Reid still wants to hold a cloture vote tonight, but if Susan Collins doesn't come around soon, that vote will fail.