How roller-skating made me love exercise

I've always been allergic to gyms. Then I rediscovered an old obsession, and it brought out a whole new me 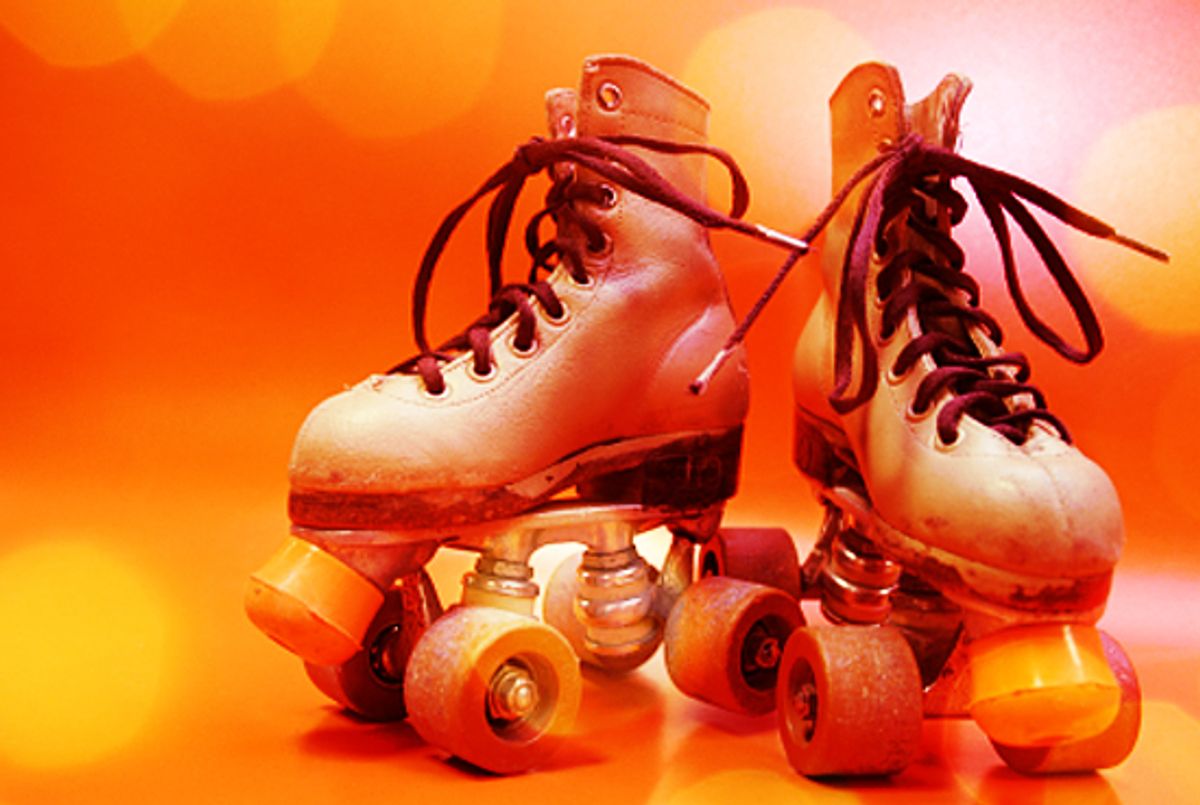 A while back NBC Universal offered me my own video series. They called it "Big Life," but we never shot any episodes beyond the pilot.

I was supposed to be scripting my own episodes for the show, but it didn't take long for NBCU to start nudging me in the direction of things that didn't ring true for me. When it came time to talk about Episode 2, I was encouraged to write a script that took me into a Crunch gym for a workout with one of the network's preferred fitness experts -- a personal trainer.

I wanted nothing to do with the idea, because there was nothing about it that felt organic or true to me. I never did enjoy going to a gym. Historically, I've found gyms mind-numbingly boring. I'm much more interested in finding engaging activities -- like biking and swimming and fencing and tennis -- that make fitness feel more like fun than drudgery.

In fact, one physical activity I've loved since childhood is roller-skating. As a teenager I frequented roller rinks the way oily hustlers flocked to discos. Rinks were underage nightclubs with cardboard pizza and flat soda, where controversial romances took wing during "slow skates" and where New Wave girls like Dina Adams and me begged Flock of Seagulls requests at the DJ booth.

Roller-skating had been easy to learn in those days, and although I was certainly never a skating artist, I was more than capable of holding my own. I could join a racing pack like the best of them. And when the DJ started playing funk after 10 p.m., I wasn't some stiff little white girl. This was where I could claim maybe a tiny bit of artistry. Just a tad. But I'll let the Gap Band take most of the credit.

Roller-skating went the way of rug hooking and making potholders on a lap loom. So for most of my adult life, I didn't get on a pair of skates.

But when my friend Jeffrey told me about a still-existing roller rink about a half-hour from my home, I got newly enthused. We drove to Jackson, N.J., for $2 family skate night.

I couldn't wait to get those ratty, clammy rental skates on my feet. As I laced up, I watched as kids of all ages circled the shadowy rink to Lady Gaga, and couldn't wait to get back out there. I marveled at the number of mullets and stiffly sprayed bangs that showed up one night in 1983 and apparently never went home. I was amazed at the chubby little girls in pink leg warmers, jean jackets and side-ponytails and realized, wow, everything really does go 'round in circles.

Skates on, I leapt up from the carpeted bench and wobbled. Whoa, OK, I laughed. Must remember carpet does funny things under four wheels.

But soon enough, it became apparent: It wasn't the carpet. It was me.

And my roller-skating muscles were gone.

I pushed my legs forward on the polished rink floor and my ankles screamed in agony.

I found myself reaching for the wall. I laughed again, but more of a panting-laugh this time. "You'd ... you'd think I'd never skated before," I huffed to Jeffrey. "You ... you go on and skate without me. I don't want to ... hold you back."

Jeffrey did some kind of Olympic pirouette 20 feet into the air and as he landed, angels sang and he glided away in a pink mist.

I made it haltingly to the next "off-ramp" and collapsed onto a bench.

My knees were crying like orphaned babes. My butt was tensing up like it expected to be punched.

I looked at all the skating kids, all the skating grown-ups, my 50-something skating friend Jeffrey, and Methuselah flying by in some lagenlook get-up and a cute pair of white low-risers with purple glitter wheels.

And I felt painfully frustrated.

I watched their bodies moving and I knew how to move like that. The muscle memory remained in my body, but my body just wouldn't go. It was how I imagined it must be to lose one's legs yet still remember how it feels to run -- wanting to propel one's self out of that chair and start pumping forward, but there are no legs to stand on. Just the phantom memory of muscles moving, feet springing away from the earth and landing again.

It was the first time in a long time that I felt physically incapable of doing something I wanted to do.

With a little practice on the carpet I was able to eventually get back on the skating floor and push myself pathetically around the rink, half a lap at a time before I had to sit and rest again. Every time I tried to push a foot out away from me, the way one would when skating, my leg parts said, "Uh-UH!"  Instead of a fluid leg movement like tracing butterfly wings on the floor, I jerked forward, putting halting little bursts of power behind each foot.

"Oh, man, and now they're playing Rick James!" I cried out wistfully to absolutely no one. I bit my lip, resolved not to shed a tear over my shocking new limitations, but to keep it positive and fight my way back to 1981-ish skating condition instead.

Yes, Jeffrey and I did return to the rink, but our visits aren't frequent enough for me to improve much. So, in between, I've started going to the gym.

And I can scarcely believe I'm saying this, but -- I'm not hating it. And it's because I have a definite purpose. My goal is to skate again. To be able to carry my body around the rink multiple times without stopping, smoothly, gracefully and with a modicum of style.

When Jeffrey jumps up excitedly from the bench and shouts like a seventh-grade girl, "I'm sorry, but I just have to skate to this!" then darts out into the rink away from me, I want to be able to dart right out behind him. I always knew I'd be eternally 14 in spirit -- but with the foolishness of youth, I never believed it when they told me my body would stop keeping up.

Kim Brittingham is the author of the book "READ MY HIPS: How I Learned to Love My Boy, Ditch Dieting and Live Large."