"The Fighter": From small-town palooka to champion 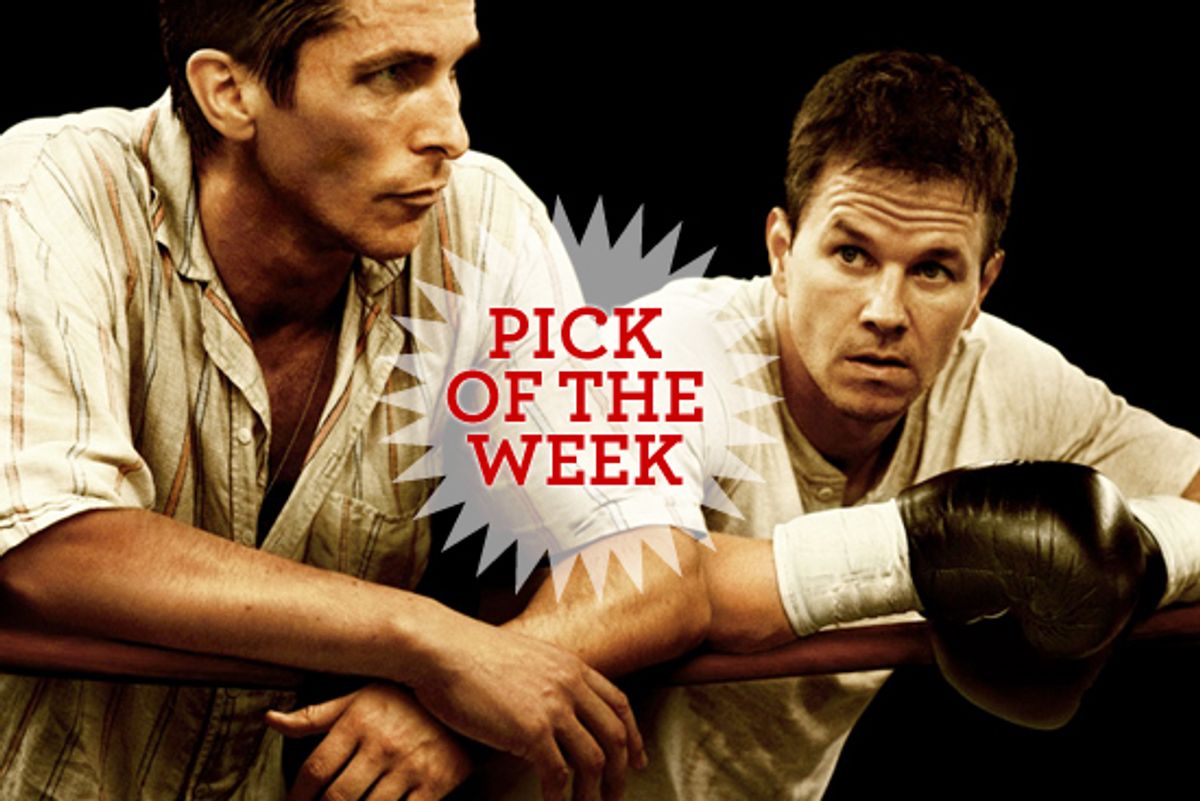 Originality is overrated; when it comes to storytelling, it may not even exist. The entire audience knew that Oedipus the king was going to kill his father and screw his mother, despite all his efforts to outrun that prophecy, and the entire audience for David O. Russell's film "The Fighter" will know that "Irish" Micky Ward (played by Mark Wahlberg), lovable palooka of Lowell, Mass., is going to get that title shot and reunite his brawling, hopeless family. The magic of "The Fighter" is all in the telling, in the fact that Russell has taken a tale of mythic American redemption and one of those Hollywood screenplays with four credited writers and somehow made a movie so rousing, so real and so full of complicated emotions that it all feels brand-new.

Micky Ward is a real person, a notable junior welterweight boxer who retired in 2003 and who will not, God willing, see this movie as the spark for a comeback at age 45. Yeah, this is yet another American movie "based on a true story," as they say in the trade, but let's not get distracted by that. "The Fighter" is a great yarn, full of laughs and unlikely triumphs and bigger-than-life characters, more than it is a docudrama. You're better off knowing only the basics about Ward and his half-brother, Dick Ecklund (Christian Bale), himself a boxer who once went 10 rounds with Sugar Ray Leonard. (Exactly what happened in that fight is a plot point of sorts, so I'll say no more.) A lightning-quick motormouth as a fighter -- something like a working-class white-boy answer to Muhammad Ali -- Dickie has descended into petty crime and drug addiction by the time "The Fighter" begins, in the early '90s. He thinks, or claims to think, that the documentary crew following him around is interested in his boxing comeback; their movie's really about his life as a crackhead.

Bale's going to get plenty of awards love for his loosey-goosey, scary-funny portrayal of Dickie, the erstwhile "Pride of Lowell," a skeleton with busted teeth who shuffles around the once-bustling Merrimack River mill town smoking rock with Cambodian immigrants and regaling strangers with stories of his long-ago exploits. So will the wonderful Melissa Leo, who plays Dickie and Micky's mom, Alice, in a terrifying bouffant and a series of tailored cream, beige and mauve outfits that make Carmela Soprano look like a model of WASPy restraint. (Some costume designer had a great time buying or building her duds.) Both are tremendous as richly awful characters who stop just short of parody -- at least, I think they do -- but I hope they don't overshadow Wahlberg, who plays Micky as a stolid, introverted thoughtful kid who's used to never getting a word in around his mom, his big brother and his seemingly infinite gaggle of meddlesome, big-haired sisters. It's one of the best performances of his continually surprising career.

At first, the indistinguishable Eklund-Ward sisters, all six or seven or 15 of them, seem like the text of a mean-spirited gag about working-class Catholicism; by the time the movie was over, I thought of them as a half-comic Greek chorus, perhaps a combination of the Pleiades, the Fates and Shakespeare's witches. They narrate and interrupt and interfere with the story of Micky's declining fight career, which has pretty much hit the rocks thanks to Alice's managerial incompetence and the, er, uneven work ethic of Dicky, his trainer. After taking an Atlantic City beatdown from some ex-con who outweighs him by 20 pounds, Micky begins to face facts: He's a second-rate white-boy punching bag from Nowheresville, with a powerful left hand but no moves; time to hang it up.

But of course then we'd have no movie. Along comes Micky's hard-ass new girlfriend, Charlene (Amy Adams), the hot barkeep from the local tavern -- Micky's sisters insist on describing her, disparagingly, as an "MTV girl," which I think translates to "slut and suspected bisexual" -- who insists he break up with this mega-dysfunctional family and build a real career, and there's a mom vs. girl family drama built on top of the boxing flick. There's nothing groundbreaking about the story of "The Fighter," but at least it doesn't surrender to the rampant sentimentality about family and poverty that infects American cinema as a whole. Family can be as much a prison as a springboard, especially if your family is as messed up as Micky's. He loves Alice and Dickie, but their lives have been poisoned by drugs and denial and ignorance and greed. Being poor has not ennobled them (and doesn't ennoble much of anyone); it has made them lie and cheat and mistrust and grasp at what's in front of them with no thought about other people or the world. Of course Russell and the screenwriters are driving toward a sentimental conclusion -- much more sentimental than the real ending of the Ward-Eklund story, as it happens -- but the journey is plenty wrenching.

Several other movies this year have tried to tackle working-class American reality (at least in its Caucasian, New England form), including Ben Affleck's self-indulgent thriller "The Town" and the tedious Hilary Swank vehicle "Conviction." Russell's jazzy, ruthless, affectionate and funny film outshines them all, and is a terrific date movie to boot: It's a boxing flick with bone-jarring action scenes for the guys, and a family-and-relationship comedy for the gals! I don't know what the deal is with David O. Russell, beyond what you and I and everybody else read in the gossip columns: He's difficult to work with and has trouble making deals or whatever, and this is his first feature since "I Heart Huckabees" in 2004 and only his fifth since his 1994 debut, "Spanking the Monkey." (Supposedly he's already finished his next, a political farce with Jake Gyllenhaal and Jessica Biel.)

I'm just glad to get Russell back, because he makes movies with tremendous soul, as much of a cliché as that may be. Marvelously shot and edited (the cinematographer is Hoyte van Hoytema, who shot "Let the Right One In"; the editor is Pamela Martin), "The Fighter" has high style but is never showy, blends history and fiction in fascinating fashion, and includes several of the year's best performances. Oscar voters may well end up weighing "The Fighter" against "Black Swan," made by Russell's friend and producer Darren Aronofsky -- a similar fable, told in vastly different fashion -- but no matter who wins, nobody loses. Taken together, these movies demonstrate that there's still passion in American cinema.