The newsweekly has her on the cover, but has no way of knowing whether she actually answered their questions 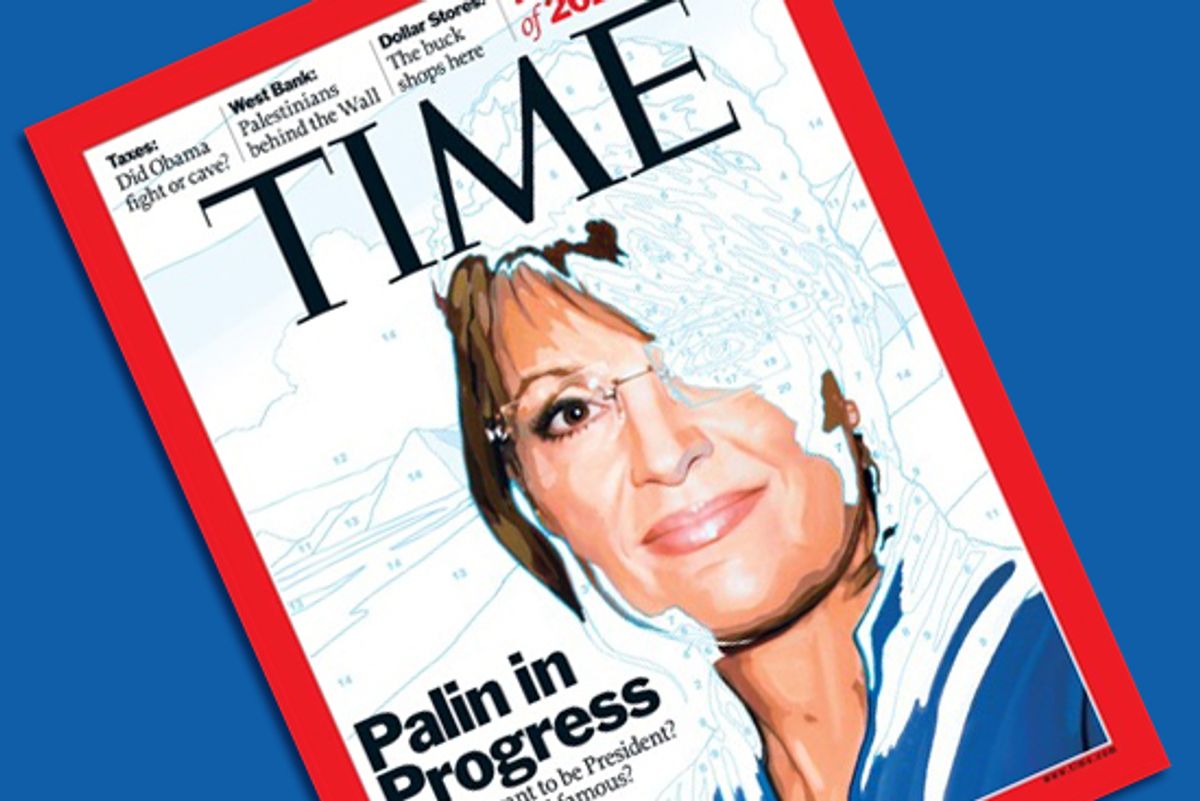 It's not until the eighth paragraph -- and the second Internet "page" -- of the Time magazine cover story on Sarah Palin's tactics and ambition that this sentence appears:

"I would run because the country is more important than my ease, though I'm not necessarily living a life of ease," says Palin, who answered questions from TIME via e-mail.

Exclusive! Palin sits down with Time for an interview! An e-mail interview, I mean. Which is generally how you get a quick statement, not how you put together a cover story. (Even when you're writing about a real celebrity, from movies and stuff, you are generally expected to, at the very least, hear their voice at the other end of a phone.)

And it raises some questions! Like, how did Time know this wasn't Rebecca Mansour answering questions? Or Todd? Did Palin's handlers rule out conducting the whole thing in GChat? (Palin's not still using that Yahoo! e-mail address, right?)

A GChat interview might've been more interesting. An e-mail interview easily allows the subject to avoid getting tripped up by tough questions and completely ignore unwelcome follow-ups. Palin's media strategy is all about limiting exposure and making sure every appearance is on her own terms and in her comfort zone. That strategy requires a press so desperate for the attention Palin content generates that they bend over backward for her -- and it looks like it's all working perfectly, so far.

This entire story could've been done as a write-around, and it would've been just as insightful (though we would've missed an awesome zinger about how often Barack Obama plays golf). Maybe more insightful, because Palin's platitudes add very little to our understanding of her appeal, or her strategy, or her plans.

Palin carefully says the first priority "of the next Republican President" should be "to sign a bill for the repeal and replacement of Obamacare with true free-market, patient-centered reform." "Some in the GOP establishment have a problem with me because I've been taking on the good-ol'-boy network for a couple of decades now," she says, "and some of the good ol' boys obviously don't like it." "The country is rejecting his agenda ... My vision of America is diametrically opposed to his. He sees America as the problem. I see America as the solution."

This is different from just reporting what her Facebook messages say how, exactly? At least the New York Times got an hour on the phone with her. (And a priceless line: "I just tweet; that’s just the way I roll.")

But while ignoring Palin's requirements and writing a story without her "participation" might've made the piece better, it probably wouldn't have gotten its author onto "Hardball," as Jay Newton-Small was yesterday. So good work, Time!

(And as always, the most irritating thing about reading the story is Time's insistence on begging me to view a vaguely related slide show every hundred words: "But one clue to the Mystery of Sarah is that her circle of aides looks less like a campaign in the making than a quirky family business in which Palin is the chief product. [See pictures of Sarah Palin's fashion looks.]" No thanks?)