The once-glamorous star has been in a professional rut. Her new turn as Johnny Depp's seductress turns up the sex 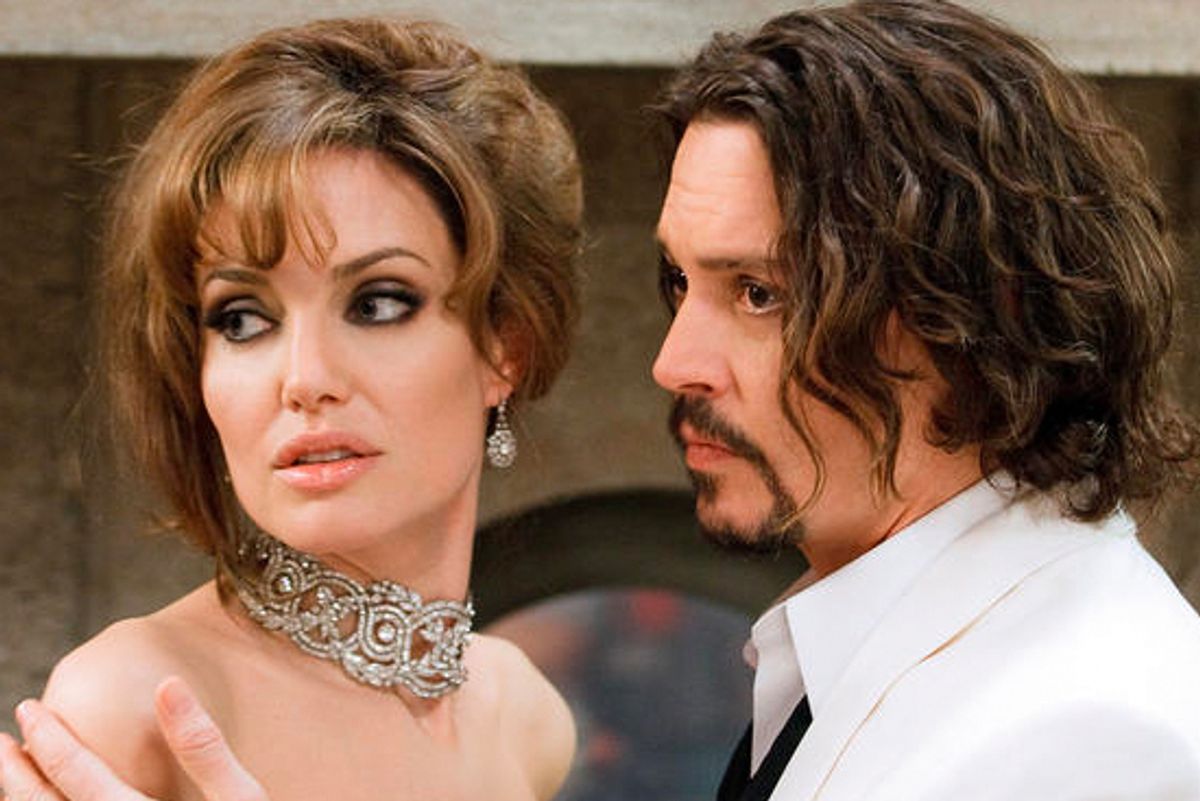 Angelina Jolie and Johnny Depp in "The Tourist"
--

It was an afternoon editorial meeting in the overheated conference room here at Salon.com, and just like people at water coolers across the land, we were talking about what the Sam Hill had become of Angelina Jolie's career. Sure, "Salt" was a fun, empty-headed action flick, but her character was the most desexualized she's ever played, and as multiple gossip sites had informed us, the role was originally written for Tom Cruise. After making multiple craven Oscar-bait failures -- playing the bereaved Mariane Pearl in the dull, earnest "A Mighty Heart" and playing a bereaved, roller-skating 1920s mom in the even drearier "Changeling" -- Jolie seems stuck in the doldrums, no longer the sizzlin'est babe in the whole entire world but not quite an A-list prestige actress either.

It can be difficult to discern a pattern in the decisions made by movie stars, since so many moving parts are involved -- agents, managers, publicists, family members, massage therapists and so on. But by her own account Jolie is using her acting salary to support her true métier as globetrotting humanitarian and celebrity mom, and she certainly seems more engaged by that second career. At least since hooking up with Brad Pitt six years ago on the set of "Mr. & Mrs. Smith," Jolie has vacillated between tepid dramatic roles in would-be Oscar winners (Robert De Niro's CIA drama "The Good Shepherd" also belongs in that category) and other stuff that was presumably unchallenging and paid well, including voiceover roles in "Beowulf" and "Kung Fu Panda." Other than the forgettable actioner "Wanted" in 2008, she has avoided roles that played to her galactic-scale sex appeal and glamour-girl reputation.

During our gabfest, one of my colleagues suggested that Angie needed to take on slinky, sophisticated seductress roles in adult-oriented thrillers long on bling and sexy locations. I believe the phrase "a 'Thomas Crown Affair' sort of thing" was used, although she might just as well have said "a 'Mr. & Mrs. Smith' sort of thing." Well, lo and behold: The next evening I went to see "The Tourist," in which Jolie appears in fire-engine lipstick, truly astounding mascara and a collection of eye-popping designer gowns, playing opposite Johnny Depp in a mistaken-identity espionage drama set in Venice. German director Florian Henckel von Donnersmarck (who made the foreign-language Oscar winner "The Lives of Others") delivers the goods on an eye-candy level, providing at least half a dozen va-va-voom shots in which Jolie, with eyes blazing, cascading hair and bared shoulders, parts a crowd like Moses parting the waters, while clad in a dress that cost twice as much as my car.

You could say that Jolie has been working on her craft, by which I mean that she manages a mostly OK English accent as international woman of mystery Elise Ward, and also speaks a full sentence in passable French. (Famously, she managed to play Mariane Pearl, who is actually French, without uttering a word in that language.) More to the point, Jolie at 35 now has the worldly grace and demeanor to pull off this kind of clotheshorse-fantasy character without looking like a schoolgirl playing dress-up. But after I tell you that she looks smashing and that Donnersmarck, cinematographer John Seale and their production team create picture-postcard images of several ravishing Venetian locations, there isn't a lot left to say about "The Tourist."

This is a pale simulacrum of those high-style travel-porn thrillers of the '60s and '70s, which only serves to remind us that those aren't as easy to pull off as they look, and also that maybe they weren't so great in the first place. Plot comes in a distant second after pretty pictures here, and what there is of it (adapted by Donnersmarck, Christopher McQuarrie and Julian Fellowes from a 2005 French thriller, "Anthony Zimmer") lumbers awkwardly along, toward a blindingly obvious last-act switcheroo. Following instructions from her absent lover, an internationally wanted whiz-kid criminal named Alexander Pierce, Elise boards a train from Paris to Venice and hits on a stranger who vaguely resembles Pierce, but who turns out to be a tongue-tied math teacher from Wisconsin named Frank Tupelo (Depp). Interpol at first assumes this really is Pierce, after some expensive Lisbeth Salander-style plastic surgery -- and so does Reginald Shaw (Steven Berkoff), the thuggish tycoon from whom Pierce stole billions.

Depp is quite enjoyable as the slightly plump, slightly shaggy Frank, who winds up shacked up with an unbelievably beautiful woman in Venice's fanciest hotel and being variously harried by British secret agents, Italian cops and Russian mobsters. "May I pay you a compliment?" he purrs to her on a balcony overlooking the Lido. "You are the least down-to-earth person I have ever met." The largely British cast is better than it needs to be: Along with Berkoff, a semi-legendary figure in London theater, supporting roles are filled by Paul Bettany, Timothy Dalton and Rufus Sewell. But the movie's action scenes are mild, slow and dull -- Donnersmarck has no feeling for that idiom -- and what's really going on beneath the confusion is a) not that hard to figure out; b) not especially fun or interesting and c) thoroughly ridiculous.

Angelina Jolie isn't the big problem with "The Tourist" -- she is its primary decorative element, and probably the best reason to see it. Maybe my colleague was right in suggesting that this kind of movie is right for her, but the evidence here makes me wonder whether this kind of movie is worth doing at all. With all its balls and gowns and posh interiors and promiscuous Old World bling, "The Tourist" is tame and timid, suffused with nostalgia for something that was fake in the first place, old-fashioned but lacking any trace of "Ocean's Eleven"-style retro hipness. Sure, it vaguely resembles a movie Cary Grant and Audrey Hepburn could have made -- a bad one, now forgotten except by a coterie of aging devotees, who yearn for a piss-elegant lost world of guys in tuxes, women in dresses and dialogue without cuss words. If that's Angelina Jolie's demographic, heaven help her.