Obama: Imperfect tax deal worth it

The president acknowledges criticism of an agreement that benefits the wealthy, claims that it is needed 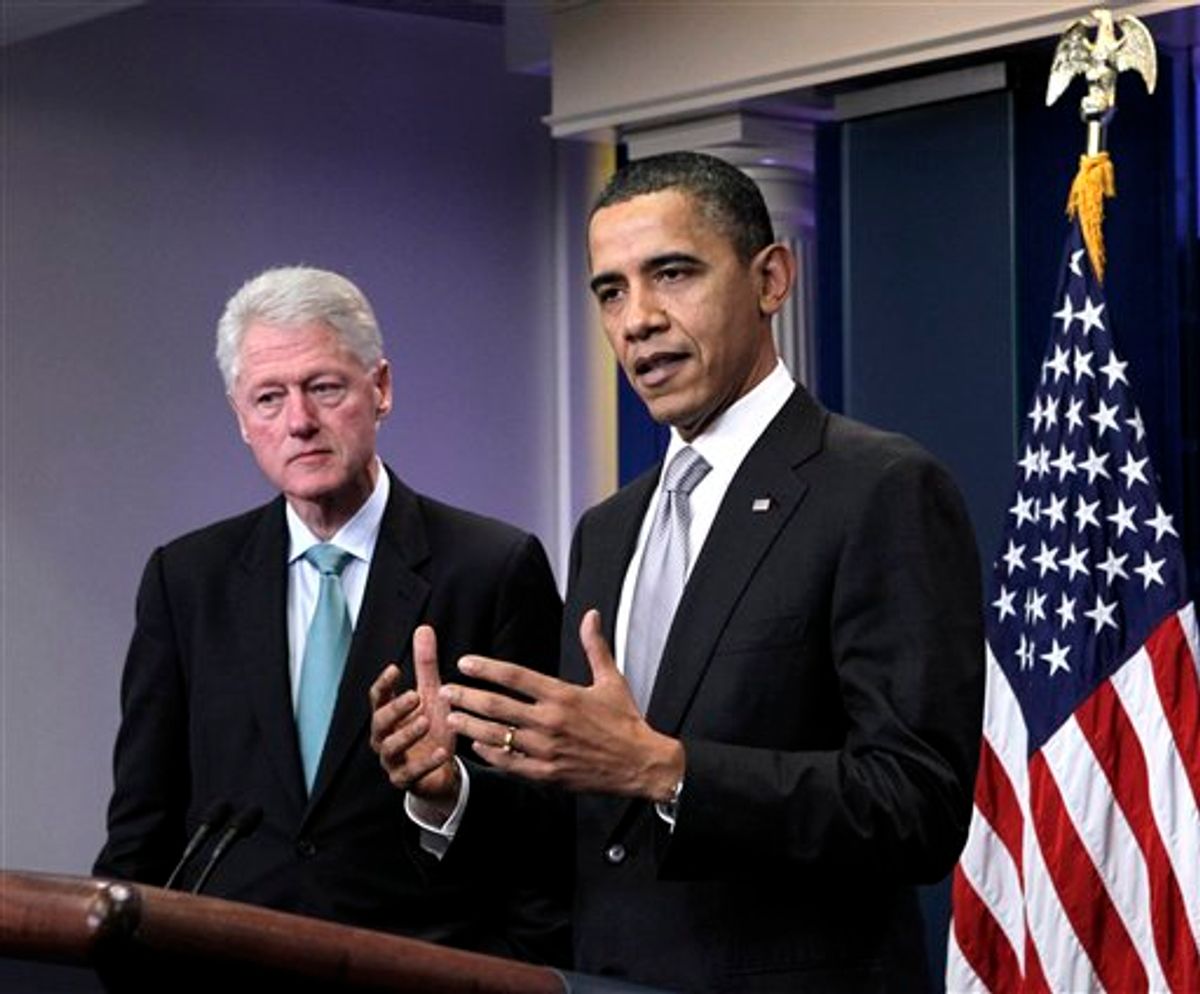 President Barack Obama, accompanied by former President Bill Clinton, speaks briefly in the briefing room of the White House in Washington, Friday, Dec. 10, 2010, before giving the microphone to Clinton, where he talked about Obama's urging of the Congress to move on the tax compromise he made with Republican congressional leaders. (AP Photo/J. Scott Applewhite) (AP)
--

President Barack Obama calls his tax-cut agreement with Republicans far from perfect but a good deal overall for Americans, while acknowledging that many fellow Democrats aren't happy about what he negotiated with the GOP.

Pressing for passage by year's end, he told lawmakers in his radio and Internet address Saturday that "our recovery will be strengthened or weakened based on the choice that now rests with Congress."

The deal would extend for all earners cuts in income tax rates that are set to expire next month. It would renew jobless benefits for the long-term unemployed and trim Social Security taxes for one year.

Republicans support the plan because it would not impose higher taxes on the wealthiest, as Obama long had wanted to do. Democrats object to the pact on grounds that it is too generous to the rich.

"The opportunity for families to send their kids to college hinges on this debate," Obama said. "The ability of parents to put food on the table while looking for a job depends on this debate."

He said he was confident that Congress, where voting is expected to begin on the measure next week, "will do the right thing."

Obama won some high-profile backing for the agreement from former President Bill Clinton. The former president told reporters after an Oval Office meeting with Obama on Friday afternoon that "I don't believe there is a better deal out there."

In their weekly address, Republican Rep.-elect Kristi Noem of South Dakota applauded the deal and said it's good for small businesses.

"With unemployment still rising, the No. 1 thing our family-owned small businesses need right now is certainty," she said. "They need to know that the government is not going to come in and do anything to jeopardize their ability to keep their doors open. So it's certainly encouraging to see that President Obama has proposed a potential agreement to stop all the tax hikes scheduled to take effect on Jan. 1."

But she said additional steps will be needed to spur economic growth, including spending cuts, making government smaller and repealing the new health care law.