How to get ahead as a Republican in 2010 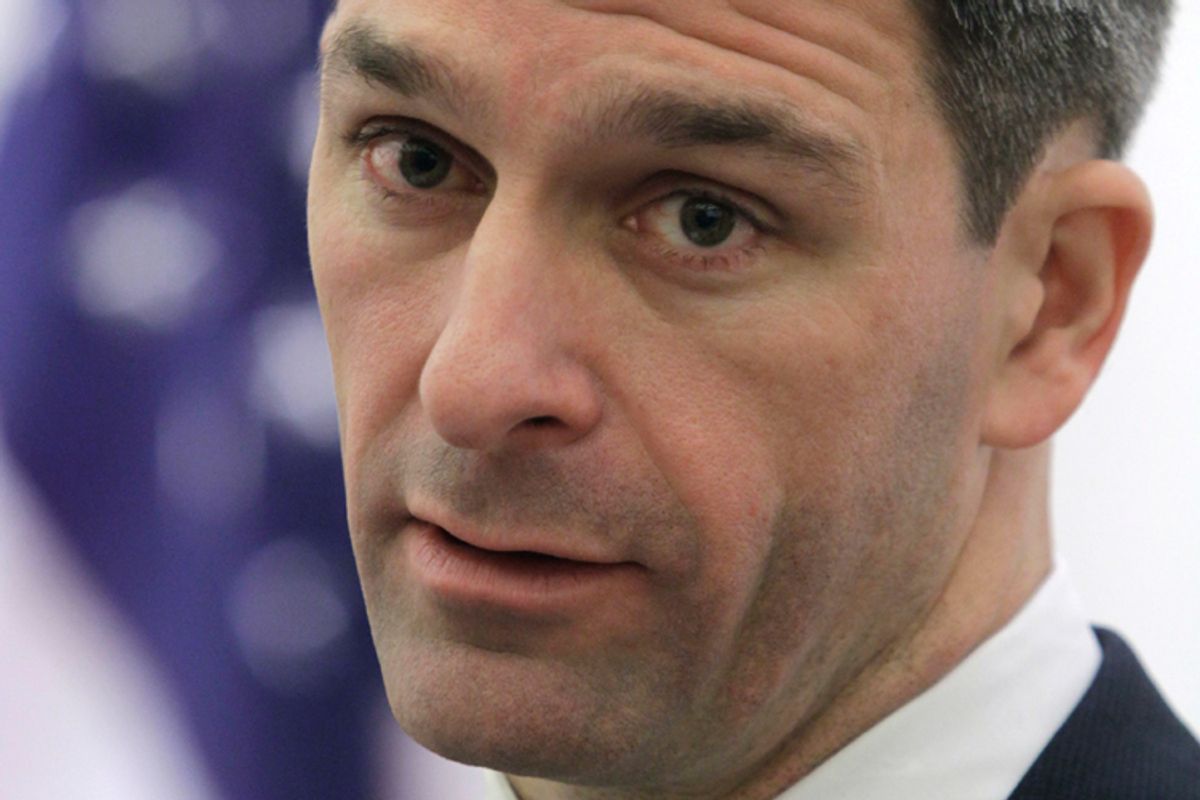 Ken Cuccinelli has called homosexuality "intrinsically wrong," sought to alter the 14th Amendment in order to strip the children of undocumented immigrants of their citizenship, questioned the science of climate change, and dabbled in birtherism.

He is, in other words, a near-perfect embodiment of the passions that animate the base of the Republican Party in the age of Obama. And on Monday, the Virginia attorney general scored his biggest coup yet, convincing a (Bush-appointed) federal judge to declare the individual mandate of the new healthcare reform law unconstitutional.

Whether the decision ultimately leads to the demise of the healthcare law probably won't be known for years. Between this and other similar lawsuits pending elsewhere, at least one figures to make its way to the Supreme Court. But politically, the final outcome isn't that important to Cuccinelli, who has reaped -- and who will continue to reap -- enormous short-term political gain from his legal crusade. And if you look at the decisions he's made in his first year as A.G., it’s hard to believe that short-term political gain -- the chance to parlay his current job into a much bigger one in the next few years -- isn't what he's really chasing.

Just over three years ago, Cuccinelli's political career was nearly derailed. A state senator seeking reelection in a Democratic-trending district in northern Virginia, he survived that year's Democratic tide by fewer than 40 votes. Almost immediately, he set out to run for the 2009 Republican nomination for A.G., winning the party's nomination at a three-way state convention. By that point, the state's political climate, which had shifted dramatically in the Democrats' favor during George W. Bush's second term, was rapidly improving for the GOP. With the Democrats running Washington and unemployment soaring, swing voters came flocking back to the GOP and Cuccinelli coasted to a 16-point win.

Since then, he's aggressively exploited the power and visibility of his office to score state and national headlines on the subjects that resonate most with the Republican Party base. In addition to the healthcare lawsuit, Cuccinelli has mounted a dubious investigation of Michael Mann, a climate scientist who once worked at the University of Virginia, and challenged part of the Clean Air Act. He's also joined an amicus brief challenging the birthright citizenship of children born in America to undocumented immigrants, and at one point he advised state colleges and universities not to expressly prohibit discrimination on the basis of sexual orientation.

Predictably, this has all won Cuccinelli a boatload of free publicity and the reverence of right-wing activists and commentators in and out of Virginia -- and no shortage of wrath from liberals. It's served his purposes well. There are two major open nominations on the horizon for Virginia Republicans -- for the right to challenge Democratic Sen. Jim Webb in 2012 and for the governorship in 2013 (when current Republican Gov. Bob McDonnell will be term-limited out) -- and as of a year ago, Cuccinelli looked boxed out for both of them. In the Senate race, George Allen, who was ousted by Webb in a 2006 squeaker, seemed like he'd have the inside track for a rematch, while current Lt. Gov. Bob Bolling was the obvious choice for governor in '13. (Bolling had reluctantly agreed to seek a second term as L.G. in '09, allowing the party to avoid an ugly fight and unite around McDonnell early, in exchange for an understanding that he'd get a shot four years later.)

But now, all bets are off. The popularity that Cuccinelli has gained in the last year with conservative activists makes it entirely possible that he could end up stealing the Senate nomination from Allen (or any other aspirant) in '12, or the gubernatorial nod from Bolling in '13. Winning either of those offices would make Cuccinelli a national figure. Cuccinelli's public line has been that he plans to serve two terms as A.G. (which would take him through 2017), but in his most recent public comments, he's started to hedge. Which makes perfect sense. Cuccinelli's appeal is made for right now, not seven years from now.