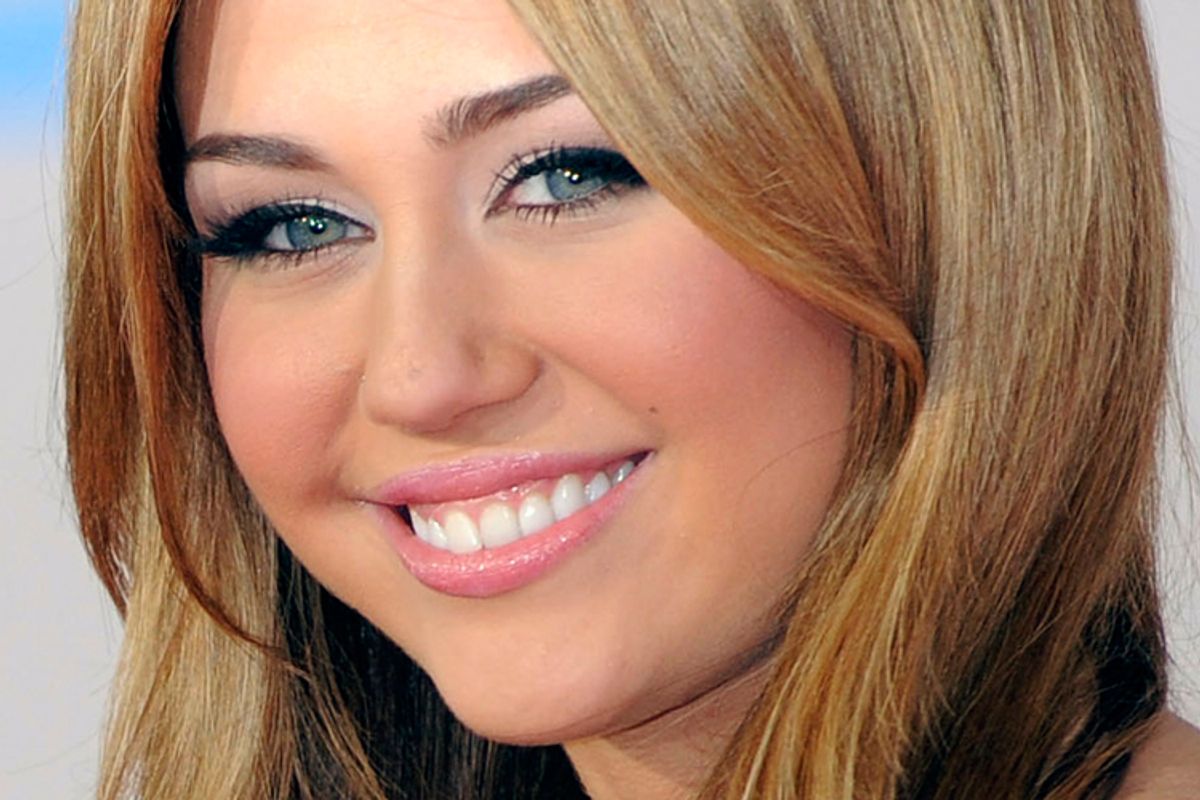 America isn't angry with you, Miley Cyrus. It's just ... disappointed. Just in time for the Disney queen's recent 18th birthday, the Internet has been all aflutter ever since video of her working a bong like Woody Harrelson at a NORML convention surfaced on TMZ this weekend. TMZ's source's claim that Cyrus wasn't enjoying marijuana but salvia, a psychoactive herb that's legal in most states including California, has led to a sudden retail rush among consumers who want a piece of whatever Hannah Montana is smoking. And Cyrus' father has posted the inevitable Tweet of Regret, saying, "Just saw this stuff for the first time myself. Im so sad. There is much beyond my control right now."

Cyrus, she of the occasional over-the-line booty shaking and Selena Gomez dissing, is certainly no stranger to the self-incriminating video. And yet, because a nation of little girls bear her face on their lunchboxes, the public outrage whenever she behaves like, well, an 18-year-old just never quits.

New York's pop radio station 92.3 has already referred to her as "every parent's nightmare"  and E! more tactfully called the incident "reputation-damaging." Adding fuel to the fire, Cyrus' childhood friend Nicole Mullen-Holm Monday gave an interview to Radar online in which she referred to her former pal as "a liar who bullied girls and was a real b*tch to everyone."

But Cyrus herself has been conspicuously mum about it all. She's back at work filming a new movie with Kelly Osbourne and generally getting on with her life. She is not using the incident as an opportunity to make a statement to kids about responsible behavior. She could, but as an 18-year-old woman whose main crime has been smoking a legal substance, she doesn't have to. She could tweet a public statement of remorse, but after a brief flirtation with Twitter, she quit over a year ago and hasn't looked back.

Yet Gawker's dry observation Monday that perhaps "early and repeat exposure to scandal shut off the part of her brain responsible for shame" suggests Cyrus' silence is somehow unusual, and reveals a strangely presumptuous expectation of contrition. It speaks to a cultural assumption that our celebrities, when they do something screwy, owe us something. Oh please, heroine to America's tweens, say something to satisfy the outrage of a concerned populace! Preferably something random trolls on the Internet can tear you down for!

The footage of Cyrus sighing, "I'm having a little bit of a bad trip," and OMGing about a fellow partygoer's resemblance to her boyfriend -- all while a friend devours Frosted Flakes straight out of the box -- isn't exactly a family values Hannah Montana-in-3-D affair. And as a parent I'd be none too pleased if that was my daughter guffawing helplessly for all the world to see. But since when did Gawker or E! or anybody else get to decide what Miley Cyrus should be ashamed of?

Sure, the relentless chronicling and disseminating of every action -- whether it's from a celebrity or one's Facebook friends -- gets off-putting fast. And I believe if you're doing something you don't want shared with the world, you should consider not recording it. That's why I give credit to Cyrus, who, for all her consistently typically adolescent behavior, at least knows when to pull back and use a little restraint. She may have let her antics be filmed, but at least now she's not commenting, she's not apologizing, and she's not doing some insincere public walk of shame. Unlike her dad and a whole lot of other commenters, she's moving on. She lives in the spotlight, but she knows she doesn't have to explain or answer for or express public shame for her every move. And that makes her more than just the chick with the big bong and the giggle fits. It makes that 18-year-old party girl -- surprise -- pretty damn mature. You might even call her a role model.