Nir Rosen on the "Aftermath" of America's wars

A gripping new book details the havoc and misery unleashed in Iraq and Afghanistan by U.S. invasions

Nir Rosen, currently with NYU's Center on Law and Security, is one of the best war journalists in the world.  Since 2003, he has spent substantial time -- always unembedded -- in Iraq and Afghanistan, as well as other nations in the region directly affected by American wars (Syria, Egypt, Jordan).  Few people have as effectively given voice in the Western World to the impact which these wars have on those who live there.  Rosen has now written an amazingly good and moving book, which I read this month, that narrates -- from both a geopolitical and very personal perspective -- the havoc, misery, chaos, instability and pure evil these wars have unleashed:  Aftermath: Following the Bloodshed of America's Wars in the Muslim World. 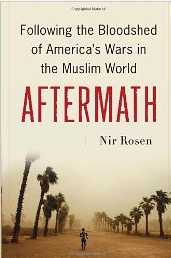 What makes Rosen's book so compelling is that it focuses on exactly that which both media accounts and elite foreign policy discourse in the U.S. systematically ignore:  namely, the effects from America's wars on the lives of the people who are most affected, and the geopolitical consequences of the wars from the perspective of those in the region.  The book has garnered praise from such diverse analysts as Tom Ricks ("If you think you understand the war in Iraq, or just think you should try to, read this book"), Noam Chomsky ("The image this meticulously detailed rendition brings to mind is of a brutal ignoramus wielding a sledgehammer to smash a complex structure he does not understand, with unpredictable but predictably awful consequences"), and Andrew Bacevich ("In this brilliantly reported and deeply humane book, Nir Rosen demolishes this self-serving picture, depicting the relationship between the occupied and the occupiers in all its nuanced complexity").  After having finished the book, my praise is every bit as lavish.

Rosen is my guest today on Salon Radio to discuss the book and recent developments in Iraq and Afghanistan.  I had originally intended the discussion to last 20 minutes, but I was every bit as riveted listening to him here as I was by Aftermath, and so it lasted roughly 50 minutes.  I hope everyone will listen to the entire discussion, as he brings a depth of knowledge and insight that really is unique among war commentators.  And a transcript will be posted a little bit later today.  But for those who right now can listen only to selected excerpts, I highly recommend the question about Iraq that begins at 18:50 (the question after that about the myths of the surge is very worthwhile as well), and the last two questions about Afghanistan, beginning at roughly 37:00.

This is genuinely a gripping and highly informative book from which anyone with any interest in these matters will benefit greatly.  I've included the link to Powells Bookstore above, which I hope everyone will use (for this book and all others) rather than Amazon (for this reason), although for those for whom it makes a big difference, the book is substantially discounted at Amazon.  To listen to the discussion, click PLAY on the player below.

UPDATE:  The transcript of this discussion is here.

UPDATE II:  Just to underscore the unique contributions Rosen provides, here is a short excerpt of testimony he gave before the Senate Foreign Relations Committee in 2007, when questioned by then-Chairman Joe Biden regarding Iraq.