Law allows USDA to set standards for all food served in schools, and gives the first funding increase in 30 years 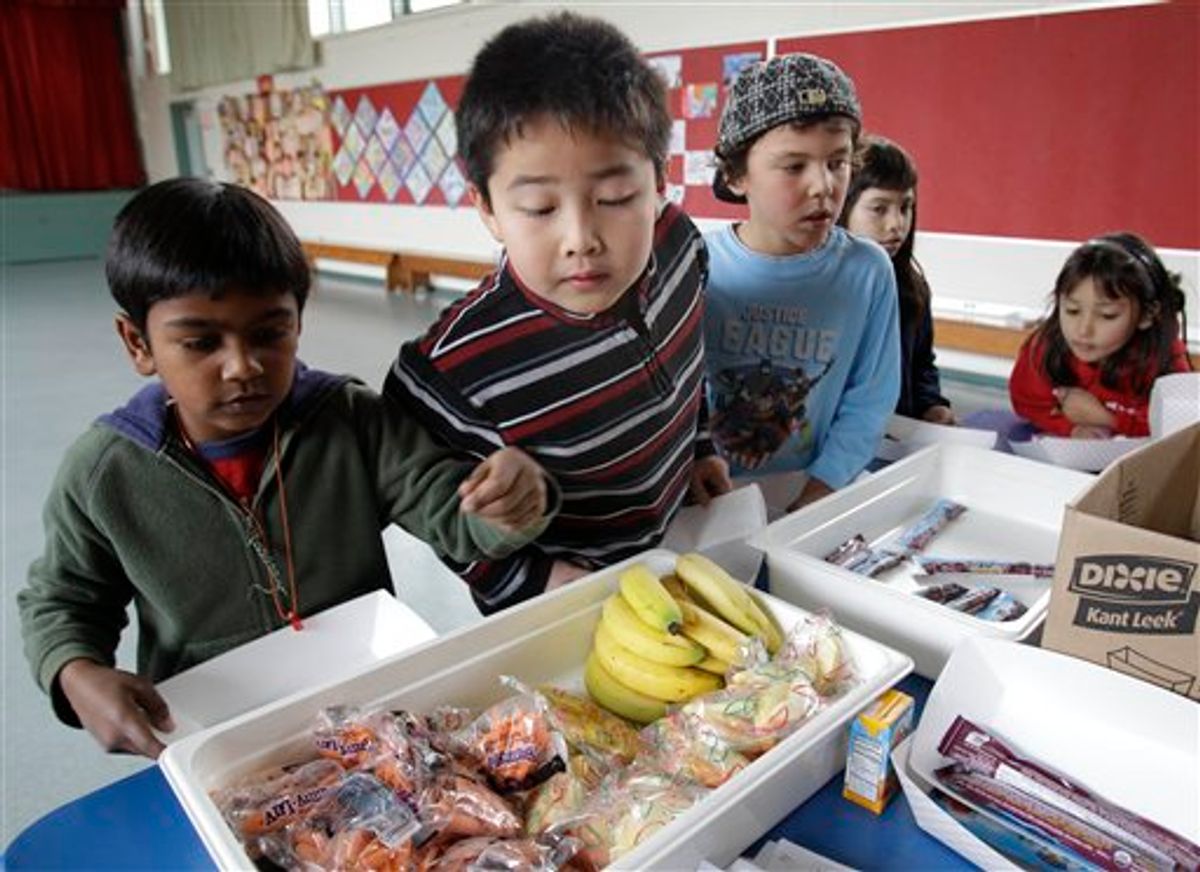 Fairmeadow Elementary School second grade student Jonathan Cheng, center, looks at fruits and vegetables during a school lunch program in Palo Alto, Calif., Thursday, Dec. 2, 2010. More children would eat lunches and dinners at school under legislation passed Thursday by the House and sent to the president, part of first lady Michelle Obama's campaign to end childhood hunger and fight childhood obesity. The $4.5 billion bill approved by the House 264-157 would expand a program that provides full meals after school to all 50 states. It would also try to cut down on greasy foods and extra calories by giving the government power to decide what kinds of foods may be sold in vending machines and lunch lines. (AP Photo/Paul Sakuma) (AP)
--

Thousands more children would get into school-based meal programs and those lunches and dinners would become more nutritious under a bill President Barack Obama signed into law Monday, part of an administration-wide effort to combat childhood obesity.

"At a very basic level, this act is about doing what's right for our children," Obama said before signing the bill. The ceremony was moved from the White House, where most signings are held, to an elementary school in the District of Columbia to underscore the point.

Besides Obama, the bill also was a priority for his wife, Michelle, who launched a national campaign this year against childhood obesity.

"We can agree that in the wealthiest nation on earth all children should have the basic nutrition they need to learn and grow," Mrs. Obama said. "Nothing is more important than the health and well-being of our children. Nothing."

The $4.5 billion measure would expand free school meals for the needy and give the government power to decide what kinds of foods may be sold in schools.

The legislation also increases the federal reimbursement for free school lunches by 6 cents a meal at a time when many school officials say they can't afford to provide the meals. The new money also will allow 20 million additional after-school meals to be served annually in all 50 states. Most states now only provide money for after-school snacks.

Obama used the occasion to laud lawmakers of both parties for passing the bill, saying it shows they can unite on issues that affect the future of the nation's children.