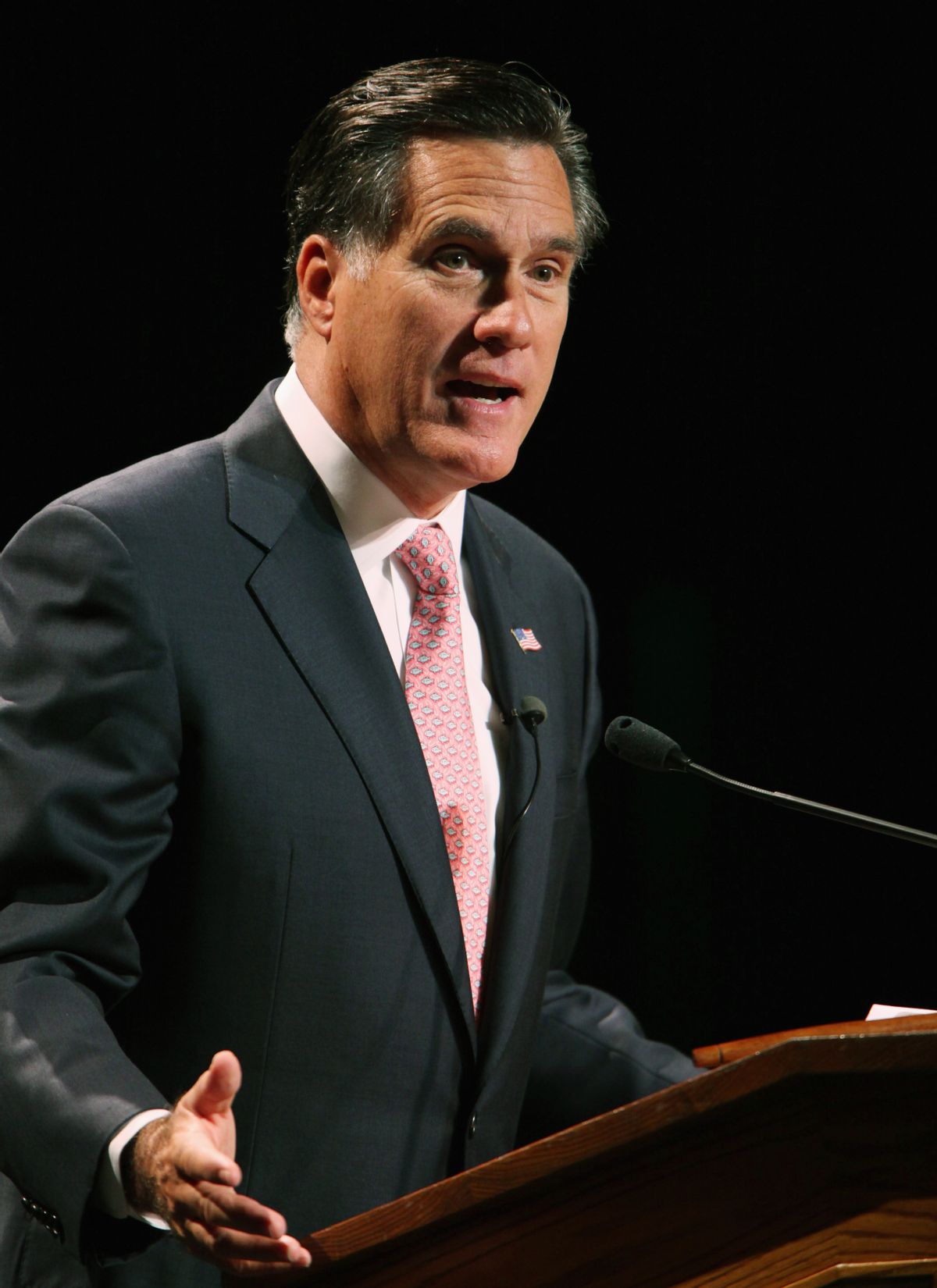 Mitt Romney kicked off a USA Today opinion piece this morning on the tax cut deal with a cliché so old and hoary that he should be banned from consideration as a presidential contender purely on the grounds of hopeless unoriginality.

"Death and taxes," he writes, "it is said, are life's only two certainties."

Let's add one more: the likelihood that as the 2012 election year approaches, Mitt Romney will redouble his efforts to be all things to all people and square every circle, and in the process of doing so, permanently mire himself in a tar pit of hopeless contradictions. The Republican primary voters who decided in 2008 that they just didn't trust the Romney who tried to remake himself from liberal Massachusetts Republican into hardcore conservative are not going to find anything here to change their minds about his congenital predisposition to tell everyone what they want to hear.

A decent and humane society must have a strong safety net for the unemployed. I served for 15 years as a lay pastor in my church and saw the heartbreak of joblessness up close; a shattering loss of faith in oneself is but only one of many forms the suffering can take.

Can you hear the "but" coming?

Nonetheless, the vital necessity of providing for those without work should not be used as an excuse to ignore the very real problems of our unemployment system. In this, as in so many other arenas of government policy, unemployment insurance has many unintended effects. The indisputable fact is that unemployment benefits, despite a web of regulations, actually serve to discourage some individuals from taking jobs, especially when the benefits extend across years.

Here's your 2010 version of a "compassionate conservative." Lip service to the need for a strong system of social welfare combined with a shout-out to the notion that government handouts create a class of bums.

Next up: tax cuts in general.

Tax cuts, of course, are good, but deficits are very, very bad. How does Mitt resolve this conundrum? First, he rolls out another long-buried cliché: the notion, popularized by Arthur Laffer, that "in many cases, lowering taxes can actually increase government revenues." The reason that isn't happening now, he says, is because the temporary nature of the current tax cuts means that businesses are still uncertain about the their long-term tax burden, and thus unwilling to invest the necessary resources that will result in a growing economy with consequent increasing tax revenues and job creation. This is pure Romney genius: he can be for tax cuts and pose as a deficit hawk at the same time by making the argument that only permanent tax cuts will bring down deficits.

Unfortunately for Romney, there is virtually no evidence to suggest that this is true. If the tax burden is at extremely high levels, there is some data that suggests dropping rates can generate marginal revenue increases. But at lower tax rates that relationship vanishes, and tax cuts lead directly to lower revenue. The federal tax burden, as measured in terms of its percentage of overall GDP, is historically low. Making the tax cuts in the current tax deal permanent will not solve the deficit conundrum.

Huge spending cuts might make a difference, however -- and Romney is surely correct to note that the tax cut deal "is sacrificing the bedrock Republican principle that new expenditures be paid for with offsetting budget cuts."

Never mind that no Republican president in the last 30 years has actually adhered to that principle. Romney only makes his comment in reference to the cost of paying unemployment benefits, blithely ignoring the fact that when tax cuts are unmatched by budget cuts they are fungibly equivalent to new expenditures.

Of course, in that respect he is no different than any other Republican. But in the context of this column, where he professes himself for and against unemployment benefits, in favor of permanent tax cuts and reducing the deficit, it's all of a piece. Mitt Romney wants to be a caring, fiscally conservative candidate for president. But he's not willing to pay the price for any part of his positions.