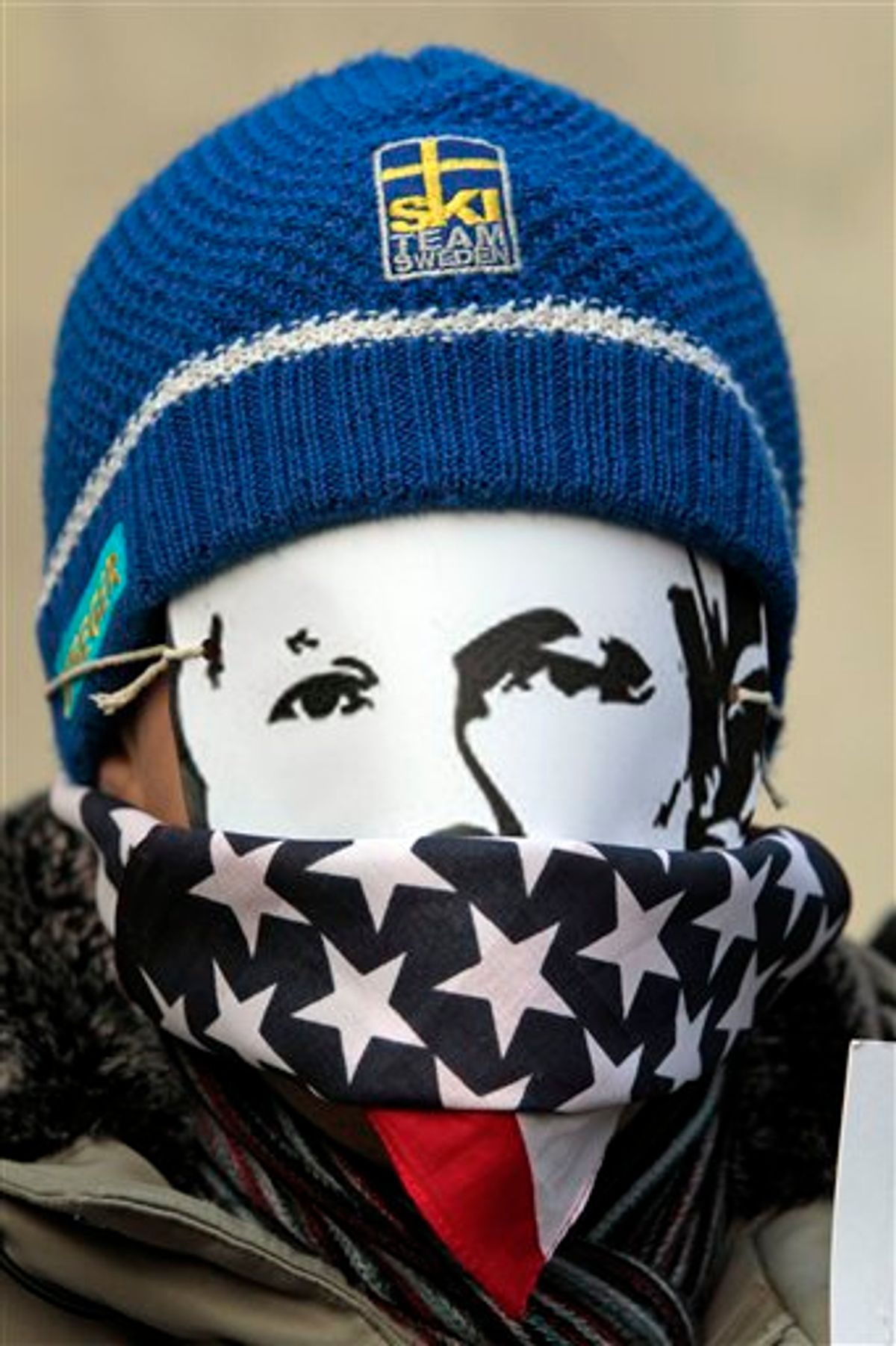 A supporters of WikiLeaks founder Julian Assange, wearing a mask depicting him and a US flag on his mouth, partiipates at demonstrate outside theS wedish Embassy In central London, Monday, Dec. 13, 2010 Assange remains in a U.K. jail ahead of a Dec. 14 hearing where he plans to fight Sweden's request to extradite him to face sex crimes allegations there. (AP Photo/Lefteris Pitarakis) (AP)
--

During the Bush era, I frequently wrote about escalating attacks by the U.S. Government on press freedoms.  The Bush DOJ vowed to prosecute whistleblowers while steadfastly refusing to do the same for the high-level criminals they exposed.  Alberto Gonzales openly threatened that the DOJ could prosecute editors and reporters of The New York Times for revealing the illegal NSA spying program.  CIA Director Porter Goss vowed to subpoena journalists who publish classified information in order to compel them to disclose their sources or go to prison.

And, worst of all, Bush officials sought for the first time in American history to obtain an espionage conviction -- under the Espionage Act of 1917 -- against non-government-employees who had received and disseminated classified information.  About that case -- brought against two AIPAC officials who had passed classified information they received from a Pentagon official to the Government of Israel (the Pentagon official pled guilty) -- I wrote about "the Bush Administration's broader, unprecedented assault on a free press of which the AIPAC prosecution is but a part," and argued that "the Bush Administration is seeking to criminalize the very act which defines what an investigative journalist does and has always done in America."  The Washington Post's Walter Pincus reported at the time, quoting a legal expert, that "administration officials 'want this case as a precedent so they can have it in their arsenal' and  added: 'This is a weapon that can be turned against the media'."  After a series of adverse judicial rulings against the Government, the DOJ finally abandoned that AIPAC prosecution.

Amazingly, the Obama administration is surpassing its predecessor when it comes to assaults on whistle-blowing and a free press.  As Politico's Josh Gerstein reported, "President Barack Obama’s Justice Department has taken a hard line against leakers. . . .'They’re going after this at every opportunity and with unmatched vigor,' said Steven Aftergood of the Federation of American Scientists."  The New York Times similarly documented:  "the Obama administration is proving more aggressive than the Bush administration in seeking to punish unauthorized leaks."  The Obama DOJ has launched nothing less than a full-on war against whistleblowers; its magnanimous "Look Forward, Not Backward" decree used to shield high-level Bush criminals from investigations is manifestly tossed to the side when it comes to those who reveal such criminality.   And they even revitalized an abandoned Bush-era subpoena issued to The New York Times' James Risen, demanding that he disclose his source for an article in which he revealed an embarrassingly botched attempt to infiltrate and sabotage Iran's nuclear program.

But if current reports are correct -- that the Obama DOJ has now convened a Grand Jury to indict WikiLeaks and Julian Assange -- this will constitute a far greater assault on press freedom than anything George W. Bush managed, or even attempted.  Put simply, there is no intellectually coherent way to distinguish what WikiLeaks has done with these diplomatic cables with what newspapers around the world did in this case and what they do constantly:  namely, receive and then publish classified information without authorization.  And as much justifiable outrage as the Bush DOJ's prosecution of the AIPAC officials provoked, at least the actions there resembled "espionage" far more than anything Assange has done, as those AIPAC officials actually passed U.S. secrets to a foreign government, not published them as WikiLeaks has done.

To criminalize what WikiLeaks is doing is, by definition, to criminalize the defining attribute of investigative journalism.  That, to be sure, is a feature, not a bug, of the Obama administration's efforts.  Just two days ago, The New York Times' James Risen wrote a story disclosing substantial classified information about the CIA, the DEA and Afghanistan, revealing that a high-level Afghan drug trafficker being prosecuted by the U.S. was long on the payroll of the U.S.; should he be tried for espionage?  I wrote in detail back in August about the dangers posed and distortions required to prosecute WikiLeaks under the Espionage Act.

After a pro-prosecution consensus toward WikiLeaks in America's political and media class quickly formed, it seems some journalists -- both domestically and around the world -- are now realizing the dangers to them which such a prosecution would pose.  To his credit, The New York Times' Scott Shane on Sunday exposed the lies being told about WikiLeaks' alleged "indiscriminate document dump" by making clear how indistinguishable its disclosures are from the world's leading newspapers (including his own); read the first three paragraphs on this page from Shane's article.

The Washington Times' neoconservative reporter Eli Lake last night wrote:  "I oppose the application of the espionage statute to Assange because the same kind of prosecution would make me a criminal too."  Leading newspaper editors and television producers in Australia have banded together in a letter to the Australian Prime Minister defending WikiLeaks, which reads:

In essence, WikiLeaks, an organisation that aims to expose official secrets, is doing what the media have always done: bringing to light material that governments would prefer to keep secret.

It is the media’s duty to responsibly report such material if it comes into their possession. To aggressively attempt to shut WikiLeaks down, to threaten to prosecute those who publish official leaks, and to pressure companies to cease doing commercial business with WikiLeaks, is a serious threat to democracy, which relies on a free and fearless press.

The New York Times' Eric Lichtblau and The Washington Post's Dana Priest -- both of whom won Pulitzer Prizes for publicly exposing classified programs of the Bush administration -- warned that prosecuting WikiLeaks would endanger investigative journalism generally.  The Denver Post editorialized that the idea of prosecuting WikiLeaks "is about the only one in recent memory that has attracted bipartisan support in Washington" but "is ill-conceived and fraught with problems" and that "acquiring and publishing information is at the heart of the definition of a free press, which has substantial First Amendment protections."  Even the government-revering Washington Post Editorial Page came out in opposition to prosecuting WikiLeaks on Sunday, recognizing that "the government has no business indicting someone who is not a spy and who is not legally bound to keep its secrets" and that "doing so would criminalize the exchange of information and put at risk responsible media organizations."

What's most striking about all of this, as usual, is how the worst and most tyrannical government actions in Washington are equally supported on a fully bipartisan basis.  It is, of course, a Democratic President -- elected on a promise of creating the "most transparent administration in history" -- that is leading these attacks on whistle-blowing and press freedoms.  And it's leading Democratic Senators like Dianne Feinstein demanding Assange's prosecution under the Espionage Act.  And it's Democratic operatives like Bob Beckel -- Walter Mondale's 1984 campaign manager -- calling for Assange to be "illegally" murdered, stating on Fox News:  "A dead man can't leak stuff.  This guy's a traitor, he's treasonous, and he has broken every law of the United States. And I'm not for the death penalty, so...there's only one way to do it: illegally shoot the son of a bitch" (note the illiterate-though-standard claim that Assange, an Australian citizen, has committed "treason" against the U.S.).

Back in the Bush era, this mentality was the province of hard-core conservatives, and Democrats typically reacted with horror.  Behold how Bush followers universally spoke about the need to prosecute not only whistleblowers but also journalists.  The Weekly Standard and Commentary repeatedly ran articles advocating the prosecution for whistleblowers and The New York Times under the Espionage Act.  Bill Bennett demanded that all parties responsible for the disclosures of the NSA program and CIA black sites be prosecuted and imprisoned.

Over and over, the Right during the Bush era argued what has now become the battle-cry of both official Washington and Democratic leaders:  that leaks of classified information cannot be tolerated and must be punished to the fullest extent of the law.  Everywhere one goes, one hears such a mentality being advocated by Good Democrats, Progressives and Obama followers.  Indeed, the only member of Congress who has thus far stood up and defended WikiLeaks and opposed prosecutions is . . . the universally disparaged GOP Rep. Ron Paul.  It's just amazing how seamlessly the two parties end up mirroring each other's arguments and mindsets when in power.

(1) It is true, as Politico's Ben Smith reported yesterday, that I resigned yesterday from the Board of Directors of CREW -- which I joined several months ago -- as a result of the irresponsible and falsehood-laden condemnation of WikiLeaks by that group's Chief Counsel.  Politico published my resignation letter explaining my decision, but I also spoke with Sam Seder about it yesterday in greater detail in an interview here.

(2) The Guardian details today that Julian Assange -- whose renewed bail hearing is taking place right now -- has been held in solitary confinement under quite repressive conditions.  As will be detailed shortly, the conditions under which Bradley Manning is being held have been far worse.  Both of them, of course, have been convicted of no crime, yet are being subjected to inhumane incarceration.

(3) Kudos to Michael Moore, who is putting up $20,000 of his own money for Assange's bail and authored quite a good defense today of the imperative of defending WikiLeaks.

(4) For Brazilian readers or those in Brazil:  I'll be speaking on WikiLeaks tomorrow (Wednesday) at 2:00 p.m. in Rio de Janeiro, at the IESP (Instituto de Estudos de Sociais e Políticos) in Botafogo; the event is open to the public and in Portuguese.

UPDATE:  Moments ago, a British court approved Assange's bail application on several conditions, including his wearing an electronic tag and observing a curfew, though he will be released from prison.

UPDATE II:  As a result of Sweden's appeal of the granting of bail, an appellate court will review Assange's bail application within 48 hours, during which time he will continue to be imprisoned.  Sweden certainly is going all out to ensure that he remains behind bars.