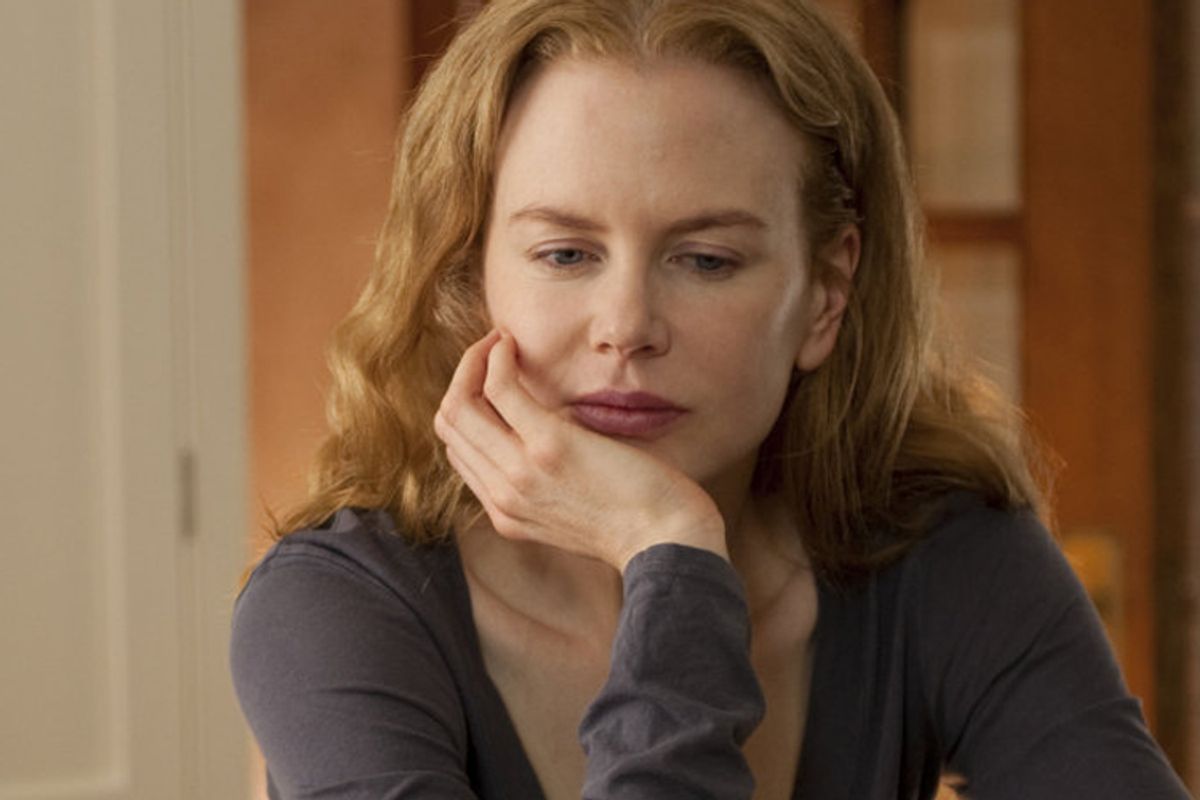 When the Golden Globe nominations were announced Tuesday, one nod in particular stood out as a bravura performance in spite of the performer's famous limitations. Nicole Kidman -- Oscar winner, movie star and the most notoriously frozen face in Hollywood – was singled out for her work as a grieving mother in "Rabbit Hole." The 43-year-old Kidman, a woman whose body of work includes risky, challenging roles ranging from the singing courtesan of "Moulin Rouge" to the murderous weather lady in "To Die For," has in recent years become as known for her unnaturally taut visage as her stunning turns in "The Others" and "Dogville."

Kidman steadfastly maintains her face is "completely natural" and "I have nothing in my face or anything." Given her often inappropriately startled expression, it's a line that stretches her credibility almost as much as her eyebrows. Her waxy countenance has become a prominent enough attribute that "Rabbit Hole" director John Cameron Mitchell has to address it head on, discreetly telling Movieline recently, "She hasn’t been under the knife. I don’t know anything about Botox, but she certainly wasn’t doing it in our film." And indeed, the trailer shows her with new, improved furrowing abilities (some outlets have celebrated the return of her facial mobility).

But Kidman is far from the only celebrity who seems to have gone the freshening up route. Some, like Courtney Cox and Vanessa Williams, admit to having had "a little" something done. Others, like Meg Ryan and Sharon Stone, tap dance around their mysteriously elasticized faces.

Why would a performer, whose whole business is devoted to expressiveness, elect to have any procedure that would restrict facial movement? As a colleague recently mused, isn't that like a musician deliberately breaking his hands? I recently sat through "Burlesque," and while the rules for ordinary mortals do not apply to Cher, I will admit the 64-year-old's cheekbones seem determined to soar right past her ears these days. Cher likely doesn't care that she is not going to get those diner waitress roles with her sculpted face, but what happens when entire generations of actors and actresses have now made themselves look like CGI versions of themselves? What happens to the intimate subtlety of drama and comedy when otherwise talented performers resemble something out of an episode of "Thunderbirds"?

Yet this voluntary hobbling surely isn't pure masochism, or even narcissism. Just look at the steep, incredibly public price extracted from stars who dare to reveal even the slightest crack in the rictus of youth. Step outside without full makeup, a fresh injection of filler, and generous retouching, and prepare to face the scorn of the planet, you crone, you. Even the famously worked-over Cher, who takes plenty of heat for her numerous procedures, received jibes for looking not "quite so camera-ready -- or so youthful" in a recent London appearance. A not youthful 64-year-old! Well, that's news. Madonna's "flawless skin"? Just a Photoshop illusion. Jennifer Aniston? Did you know she secretly feels "old and ugly"? And that's just the chorus from the peanut gallery. Try talking to a casting director or agent. A few years ago, when a theater actress friend moved to L.A., her new agent asked how old she was. When she replied truthfully, he answered, "No, you're not," and promptly shaved off a full decade. Welcome to Hollywood, sweetheart.

There are performers who seem to have gone for a far subtler nip and tuck here and there. A few months ago I sat in a cafe next to a famously gorgeous, Oscar-winning actress in her 60s, and if she hasn't had a little something done, she is surely the most genetically blessed woman on the planet. And while Julia Roberts told Elle recently, "Your face tells a story and it shouldn't be a story about your drive to the doctor's office," I find it hard to swallow that her lovely, over-40 face has never driven to any doctor's office. Fortunately, she remains natural looking enough to be beautifully convincing.

But it's the extreme pressure for higher, tighter and smoother -- the fish bowl environment of entertainment that makes plastic seem the norm -- that has got to skew these actors' version of reality. How else do we explain Mickey Rourke's face? It's hard not to cringe when a once fascinating performer turns into something out of a mannequin shop before our eyes; it's also hard to condemn them for trying desperately to hang on to an instrument that time is changing rapidly. But while Kidman was looking familiarly taut for the "Oprah" show Tuesday, maybe it's encouraging that she got her Golden Globe nomination, eight years after her Oscar-winning turn in "The Hours," for showing a little facial movement. It's heartening to note that it also nominated Annette Bening this year, a woman whose crow's feet were front and center throughout "The Kids Are All Right." Getting old isn't for sissies. But it ought to be an acceptable privilege for everyone -- even actors.