The Senate won't have to spend 12 hours listening to the START treaty, but spending bill fight hasn't even begun 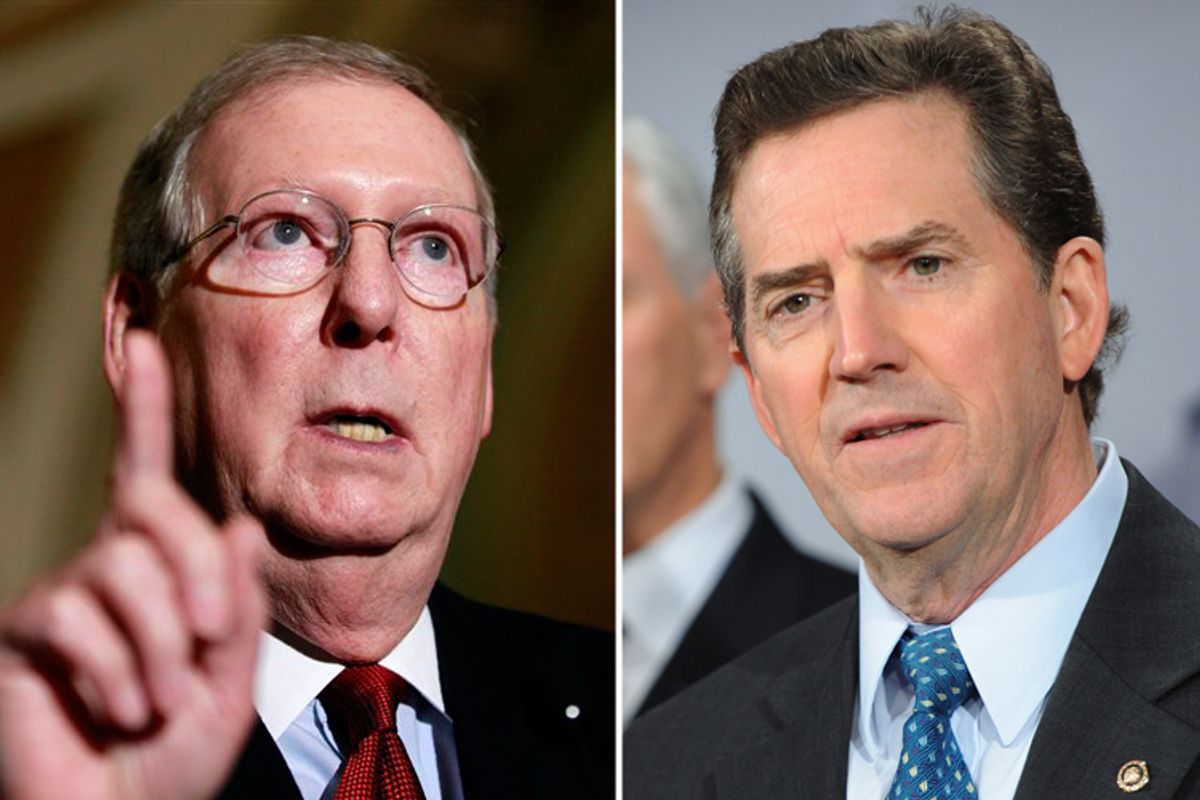 As we all know, Republicans were only delaying and obstructing action in the Senate to force a vote on the Bush tax cuts, in order to restore confidence to our nation's job-creating billionaires. Once the Senate approved the tax cut deal, Republicans immediately ... threatened to bring all Senate activity to a halt, for days, while also demanding that they not have to go to work on or after Christmas.

Sen. Jim DeMint wanted to do that thing where one senator can demand that bills be read aloud in their entirety. DeMint was going to give the New START treaty and the omnibus spending bill the bedtime story treatment, until, apparently, Mitch McConnell made him back down. (But not before Harry Reid's press secretary got in this awesome zing. Hey, Harry Reid's press secretary, you wouldn't have to just impotently insult Jim DeMint's obstructionism on Twitter if your boss hadn't spent his tenure as majority leader enabling the obstruction by refusing to change archaic Senate rules allowing endless obstructionism!)

At least, McConnell and Jon Kyl are saying that the START treaty won't be read aloud. The spending bill threat might still be operative. The omnibus bill would take about 40-60 hours to read, according to The Hill. And DeMint openly admitted that he just wants it read in order to prevent the Senate from doing anything else during a lame duck session.

(Not that the Senate needs help taking forever to do anything. After adopting a motion to proceed on New START, Reid said the rest of today will be devoted to debate, and they'll actually have the for real vote tomorrow.)

DeMint and Kyl are also the primary authors of my favorite new political argument of 2010: That holding votes near Christmas is insulting to the Baby Jesus. It's "sacrilegious," according to DeMint, to vote on things right before Christmas. Kyl made the interesting point that it's insulting to Christians to go to work between Christmas and New Year's, a week during which most of the remaining Americans with full-time jobs are indeed expected to make an appearance at the office.

Of course, Republican delaying tactics merely ensure that the Senate will remain in session near Christmas, but I think that's a feature, not a bug.

Meanwhile McConnell and Kyl and John Cornyn cannot bring themselves to support the omnibus spending bill, because it contains too many earmarks, including the earmarks that they themselves requested.