This is how the GOP Congress will regulate Wall Street? 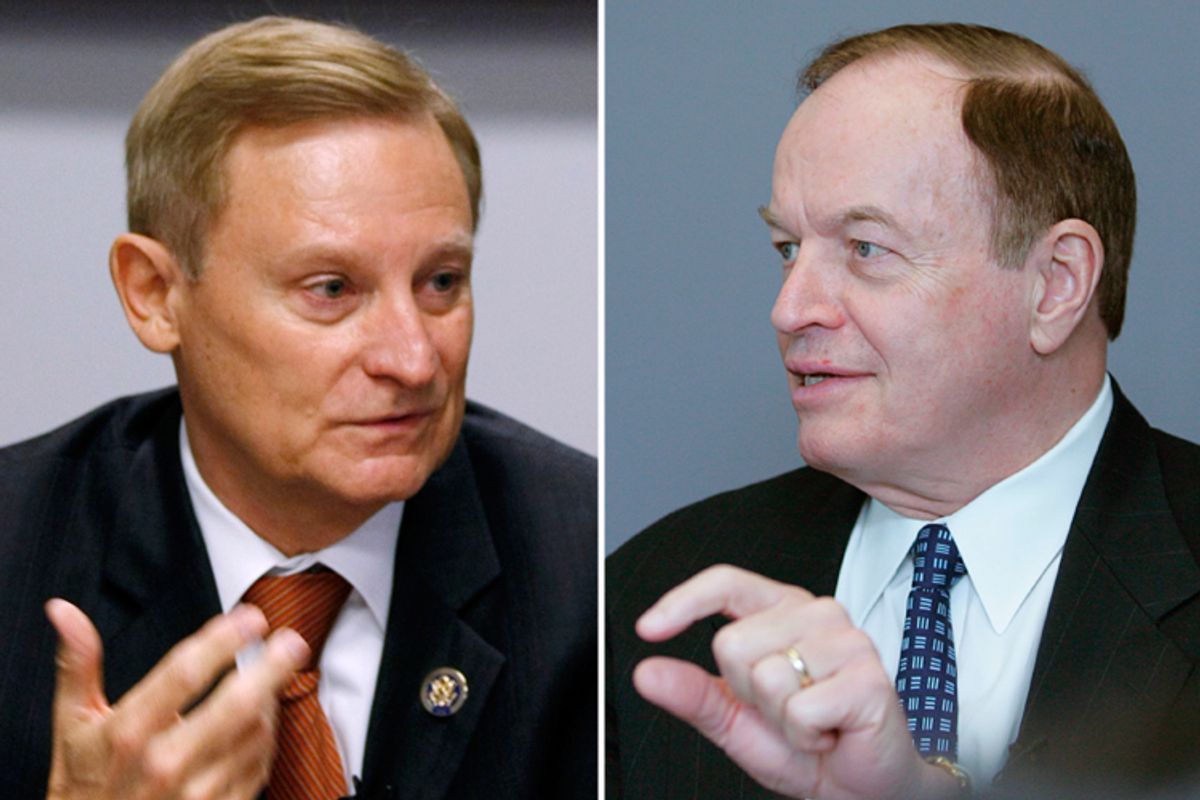 Rarely do you see a politician quite this honest: Last Wednesday, just hours after securing the position of chairman of the House Financial Services Committee, Spencer Bachus, R-Ala., told the Birmingham News that "in Washington, the view is that the banks are to be regulated, and my view is that Washington and the regulators are there to serve the banks."

In the very next paragraph, the newspaper reported that Bachus "later clarified his comment to say that regulators should set the parameters in which banks operate but not micromanage them." But the damage was already done. Bachus' quote rocketed around the lefty blogosphere, and on Monday night the 62-year-old congressman earned a coveted "Worst Person in the World" award from Keith Olbermann on MSNBC's "Countdown."

The candor of Bachus' initial statement is eyebrow-raising, no doubt about it, but the fuss and bother over his revelation is a little bit disingenuous. We don't need to listen to the Alabama Republican's words to understand just which master he intends to serve -- all you need to do is watch his actions. Together with his fellow Alabaman Republican, Sen. Richard Shelby, the powerful ranking member of the Senate Banking Committee, he's part of a dynamic duo of market fundamentalist crusaders who will likely set the tone for how banking reform and regulatory oversight aimed at Wall Street are implemented for the next two years.

Immediately after the midterm elections were over, and long before his confirmation as chairman, Bachus got quickly to work on his anti-regulation agenda. The day after the election, in fact, Bachus sent a letter to the Financial Stability Oversight Council, that, as I wrote last month, was written as if dictated by bank lobbyists. His main target: the so-called Volcker rule, which, as economist Simon Johnson has so eloquently put it, "in principle would force big banks to get out of the business of betting their capital in ways that can bring down the entire financial system."

Three weeks later, Bachus co-authored letters to the inspector general offices at the Treasury Department and the Federal Reserve, demanding detailed information about how the Consumer Financial Protection Bureau is being set up.

"History indicates that the process of setting up a new government agency is extraordinarily challenging and difficult," the two lawmakers wrote, according to Bloomberg. "To date, we know very little about the activities being undertaken by the Treasury to establish the Bureau."

But don't be fooled by Bachus' lament about "a clear absence of accountability and transparency" surrounding the establishment of the CFPB. The clear intention is to harass and block the CFPB interim director, Elizabeth Warren, at every step of the way. Over in the Senate, Richard Shelby has made no attempt to hide his disdain for the very idea of consumer protection or his distaste for Warren, but he's been relatively powerless to do anything about it. Bachus, however, will have plenty of opportunities to create friction. The reports are due Jan. 10. Hearings will undoubtedly follow. Want some must-see CSPAN TV? Watch Warren, with her Oklahoma twang, fend off the hostile questions soon to come from the deep-drawling Bachus.

Let's recap: Who hates the Volcker rule the most? The banks. Who is most annoyed by the Consumer Financial Protection Agency? The banks. Whose agenda is Spencer Bachus already serving to the best of his ability? The banks'.

With a Democratic majority still controlling the Senate and Obama in the White House, Bachus and Shelby won't be able to completely subvert bank reform and gut regulatory oversight. But there's little doubt there's a new sheriff is in town. Alabama, a state that, in terms of GDP, is about one-sixth the size of New York, is set to exert a disproportionate influence on how Washington rides herd on Wall Street.

The Birmingham News tell us that Bachus is the first Alabama Republican to chair a House committee since the 19th century. This is mostly an accident of history. Deeply conservative Alabamans have previously run the primary committees overseeing banking in both the Senate and the House -- but they were Democrats back then, since there was no place for Republicans in the post-Reconstruction South. The chain of events set in motion by the Voting Rights Act that eventually transformed the Democratic South into a sea of red states changed all that. (Richard Shelby, it's easy to forget, was a Democrat as late as 1994, when he switched sides after the big Republican victory in the midterms of that year.)

The most famous Alabaman to influence how Washington regulated Wall Street was probably Henry Steagall, whose name resonates through history from its inclusion as part of the name of the Glass-Steagall Act that separated investment and commercial banking for the better part of 60 years. Both Bachus and Shelby voted to repeal Glass-Steagall, and both of them have worked hard to make sure that the spirit of regulation birthed in the Great Depression, and revivified by the Great Recession, dies stillborn. Henry Steagall was no flaming liberal, but it is hard to imagine he'd be too pleased by today's Alabama agenda.