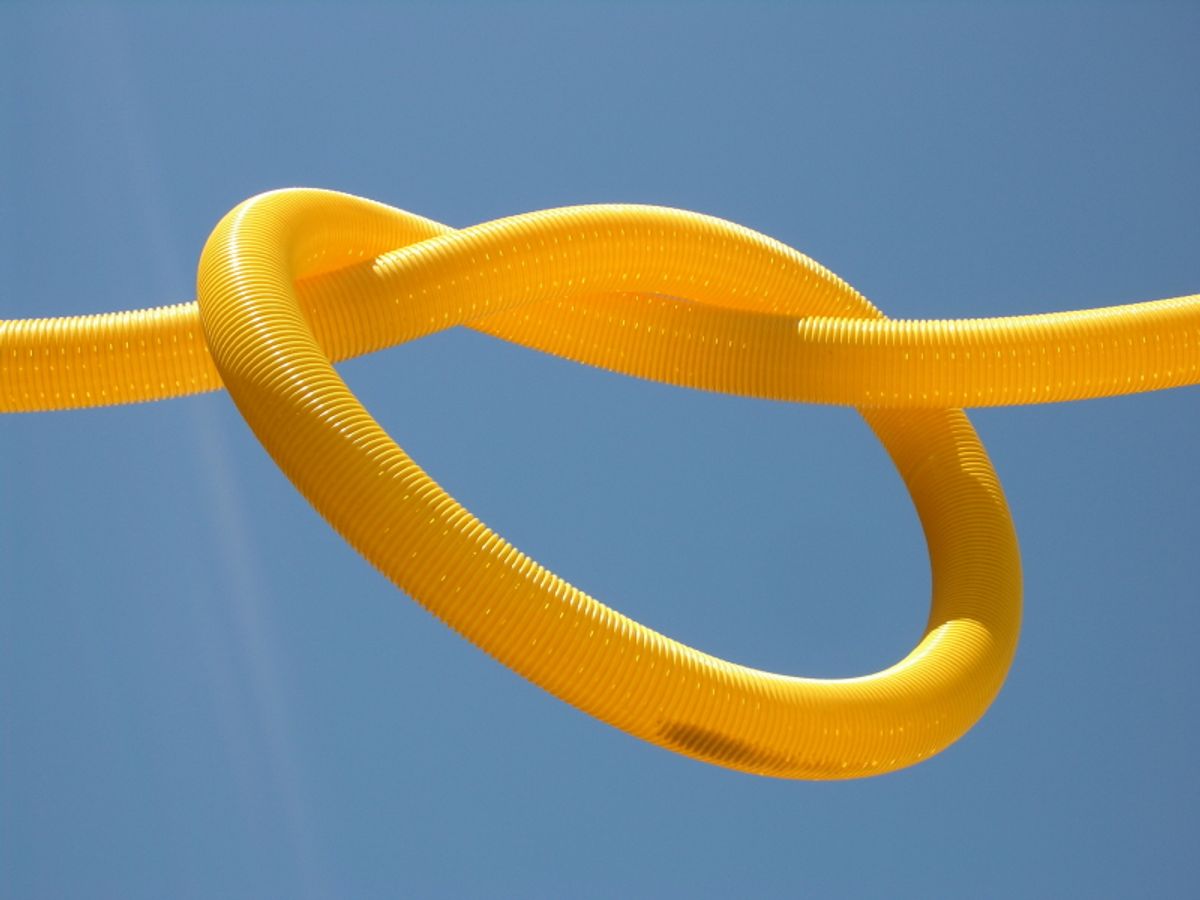 When I was 7 years old, a family friend graphically described to me how she gave birth. I don't remember the exact details -- it was an awkward barrage of information about whether or not to have an epidural -- but I do remember my unambiguous response: "I'm never having kids."

I didn't say that because I was grossed out. Even as a child, I knew conventional parenthood wasn't meant to be part of my adult life. The family friend responded the same way countless people would for the next 20 years: She told me I'd change my mind when I met the right man.

In the two decades since then, the only thing that's changed is that conversations about my fertility have become even more polarized and strained. As I entered my mid- to late-20s, folks started asking when I'll start a family (as if I don't already have one). Once, a stranger at a party poked my belly and asked when I might start showing. Apparently it doesn't occur to people that asking about my fertility might be a bit invasive, akin to asking a stranger about her weight or, say, his prostate. Apparently it doesn't occur to them that I will not offer one of two palatable answers: I'll have kids soon, or I'll get around to it eventually.

The honest answer tends to make people defensive, even though that isn't my intention: I can't have children. Earlier this year, at the age of 27, I voluntarily had my tubes tied.

How common is my situation? It's hard to know precisely. According to the CDC, only 1 percent of women in the U.S. who've had no children have been sterilized. Of all American women who've had the surgery, a little over 10 percent are under 30. Although medical guidelines reflect that the procedure is safe, the Internet abounds with horror stories about women 35 and under who encountered great resistance from doctors convinced they would later regret the choice. An article provided by the National Sexuality Resource Center quotes a doctor who summarizes that reluctance: "A woman who is twenty-five and says, 'That’s it, I've made my choice,' I would probably just have to say, 'You're making a twenty-five year old choice. You sure that’s going to be a thirty-eight or thirty-nine year old choice?'" Friends have told me stories about the disbelief and rude remarks they faced when they asked their doctors about Essure or other forms of permanent birth control.

I never thought that not doing something would make people feel so combative. But as soon as the topic turns to pregnancy or child rearing, it's never a simple case of differing opinions. It's never easy for me when someone begins a conversation by telling me, "When you have children ..." and it's taken me a long time to figure out how to politely nod or walk away from what feels like an inquisition about my reproductive choices -- because, trust me, casual answers don't work. When I mention that I don't intend to have kids, people often try to talk me out of it. They tell me I couldn't know such a thing at my age, that I'll change my mind eventually. A former colleague once sidled up at a holiday party and, perhaps bolstered by some liquid courage, cautioned that my unborn children were lucky I hadn't yet ruined their lives with my selfishness.

To me, it's odd and a bit twisted: The very people who want to hold up child rearing as the most fulfilling and amazing job ever can be the same people who don't give actual children -- let alone adults -- credit for knowing what they want. Raising children is incredibly demanding. Shouldn't we leave it to the people who really want it?

Over the years, I'd had ex-boyfriends balk at the idea that I wouldn't have their babies. But when I met Andreas, my now-husband, that just wasn't the case. Our relationship was strong enough to overcome the fact that we lived in different places and came from different countries (he's Danish) -- but being forever child-free was never a major hurdle.

We were three days into our intense courtship, wandering around a Boston art museum, when I brought it up. I'd chosen a day when half of the Southie elementary schools let their charges loose for the afternoon. Kids had been shrieking and crashing into us all day, coming dangerously close to the exhibit pieces, and I finally looked at Andreas and said, "You know this isn't for me, right? No kids. Never." Terrified I might have sabotaged our chance to make it work, I started to cry.

Andreas pulled me down to sit at a steel table in the brightly lit cafeteria. He clasped my hands tightly and studied my face for a moment, and I wondered why he couldn't be an inattentive jerk who looked around at the art instead. I squirmed uncomfortably, in what felt like the longest 10 seconds of my life. "In all honesty, I just don't care," he said. He was smiling. "If you don't want to have kids, we won't. My life won't be ruined. It might even be better."

When we moved to Denmark a year later, temporarily choosing to live in Andreas' home country after he'd moved to Boston for me, I was immediately enrolled in the Danish state-run healthcare system. My prescriptions were cheaper, and my doctor's visits and a range of surgical procedures were fully covered. While a good friend back in the States was struggling to convince her doctor to give her an IUD, I was eligible for a tubal ligation -- a free one at that.

Why weren't my birth control pills good enough? That's a fair question. While there are arguably millions of women who don't mind hormonal contraceptives, I'm unfortunately not one of them. After battling lifelong migraines, which used to strike as often as twice a week, several particularly frightening episodes involving public vomiting and near blindness while traveling forced me to consider tossing my contraceptive of choice. I'd done nearly everything else possible to get rid of my headaches and had some success. But maybe the pills were at the root of my problem.

While it arguably would have been easier for my partner to have a vasectomy -- one good friend's male partner got the snip when he was just 20, no questions asked -- Andreas had a surgery scare when he was 10 that he wasn't eager to repeat. Besides, I was the one who wanted to throw out my pills, and I'd ultimately be the one to suffer the physical consequences if I ended up unintentionally pregnant.

In a way, it was also a challenge that I couldn't resist. Anyone who's ever questioned having children probably knows that while doctors bend over backward to help infertile couples conceive, intentionally childless couples aren't really taken seriously. In the end, I got the surgery because I wanted it. It wasn't really a debate.

Or, as my stout, no-nonsense gynecologist Ulla said about sterilization during our first visit: "You're over 25, so you can do whatever you'd like."

I later met with another doctor, who gave me the standard warning that some people regret the procedure. Then asked, "Why do you want to have this done?"

My partner and I exchanged glances before I blurted out, "Do you really want the entire list?" I gave her a few of my pat answers about lack of maternal instinct, low pain tolerance and concerns about overpopulation before she signaled that I was competent to become intentionally sterile. My surgery was scheduled for one week later.

On a gray summer morning, we took the first train of the day to catch a bus connection, which snaked through a Copenhagen suburb to the end of the line where the route terminated at an unobtrusive two-story hospital straight out of the 1970s. My surgeon, a woman in a headscarf who called herself Dr. Nana, told me she'd take very good care of me and asked me one last time, "Are you sure?" I wondered if she had to make certain that my husband didn't coerce me, and I wondered how often that happens. I thought about women who might back out at the last minute and wondered who they could be. The last thing I remember was my flamboyant Swedish anesthesiologist, who'd confessed that he also didn't want children, stroking my hair as he adjusted my gas mask.

What's funny about having my tubes tied -- my fallopian tubes permanently sealed with little clasps on each -- is how much it kept reminding me of childbirth. At my intake exam, my partner quickly moved to sit by my shoulders when the doctors asked that I pop my feet into the stirrups to make sure everything looked fine. "I've learned a thing or two from those scary birth shows," he said, motioning to the speculum, clearly uninterested in sneaking a peek in a clinical setting. Waking up after surgery, Lamaze-like breathing exercises helped the pain subside enough that I was able to sit up. In the aftermath, people unfamiliar with my choice have also asked me the same sorts of questions I'd no doubt ask pregnant women or new mothers if I didn't know better. More than a few friends have wondered whether I will continue to menstruate and still have all of my reproductive organs (the answer to both is yes).

Meanwhile, my body adjusted quickly. I've had exactly one migraine since surgery, which, for someone who used to have regular nausea-inducing neuralgia, is kind of a miracle. In the right company, I show off my scar, a small red line above my pubic hair that's received a few laughs from amused friends when I yank at my waistband with glee. Sex without fear of unwanted pregnancy has been freeing and fun, and I still sometimes marvel that I so easily obtained what I'd always wanted. How often in life do we actually get what we desire?

Last month, a good friend confided over coffee that she's two months pregnant. As we hugged and cried, she confessed that I was the person she'd most wanted to tell. "All of my other friends are trying to get pregnant like it's a competition," she said. "It's so nice that you have your fertility choices all sorted out." I couldn't agree more.

Brittany Shoot is a freelance writer based in Copenhagen and Boston. Find her at Brittanyshoot.com.