How long will it take Republicans to demoralize their base? 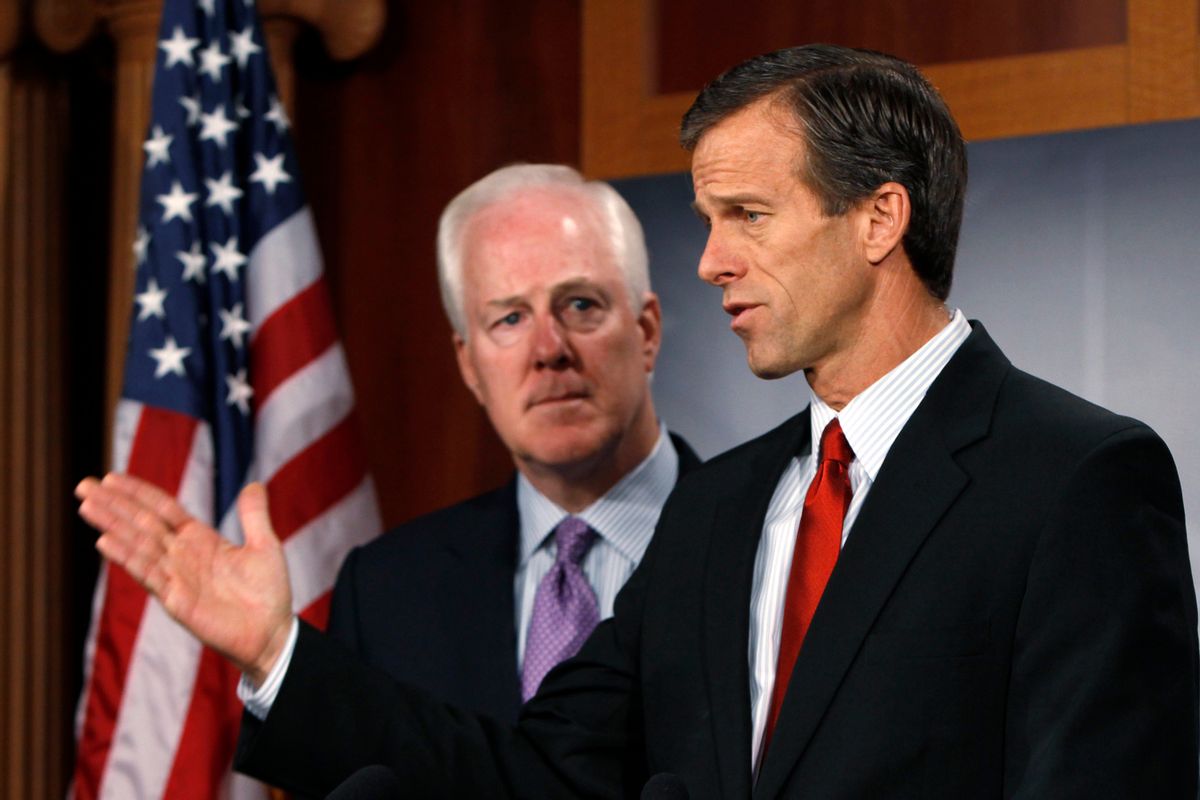 The people desperate for Republicans to nominate someone who isn't Mitt Romney have been talking up John Thune for months, but if his performance in the ongoing omnibus spending bill debacle is any indication, he's not yet ready for the rigors of a national campaign. He's barely ready for the rigors of high school debate class.

Thune just made a classic unforced error, by requesting earmarks in the omnibus spending bill (wasteful government spending!) despite voting to voluntarily ban earmarks. He made things worse when he was utterly unable to square his requests with his opposition to the bill.

Orrin Hatch embarrassed him further, when Hatch voluntarily withdrew his earmark requests from the bill entirely, because, well, he did just vote for that earmark moratorium. Why didn't Thune do the same? "I guess I hadn't thought about doing it," he told Talking Points Memo.

What Thune thought was a political win-win -- he gets cash for South Dakota if the bill passes while also fighting the bill to prove his conservative bona fides -- has backfired in his face. John Cornyn and Minority Leader Mitch McConnell both also miscalculated the level of opposition to their completely routine earmark requests.

Cornyn -- a true Republican's Republican -- was even humiliated on Fox.

It's easy enough to say that they should've seen this coming -- they all voted to ban earmarks, after all, in response to grass-roots pressure -- but there really was very little reason to think that they'd be seriously called on their hypocrisy, because these are all proper Republicans, not RINOs, and proper Republicans are rarely punished for lying to their bases.

Traditionally, movement conservatives send Republicans to Congress in great waves to clean everything up and create a glorious new Morning in America, and then about 10 minutes into the new Congress, all the Republicans are divvying up the pork-barrel money with as much gusto as Tammany Hall fat cats in a Thomas Nast cartoon, and no one really cares, because that's just how things are done. The mainstream political press is too cynical about the entire concept of governance to get outraged and the partisan press is there to get Republicans elected, not punish them for sucking at the public teat.

But there are indications that that's changing. While deficit hypocrisy extends to the Tea Party grass roots, who've been convinced that starving the government of revenue doesn't lead to government simply going broke instead of magically shrinking, they do know -- because they have been told as much -- that waste and "pork" are bad. It could be a headache for elected Republicans if they choose to take that belief seriously.

For a lawmaker, earmarks are just something you rail against while you ... request earmarks. It has always been thus. Even Ron Paul does it. Tellingly, Rand Paul said he wouldn't during his primary campaign. When, for reasons of political expediency, he reversed himself, the right-wing press actually called him on it.

The right is paying attention, and it is even beginning to actually hold its leaders accountable for their rhetoric -- by demanding that they live up to its apocalyptic incoherence.

Next year, there will be wailing and gnashing of teeth by the conservative grass roots every time Republicans in Congress find themselves forced to do almost anything -- especially big things, like "funding the government" -- and unless the GOP can somehow get back to the era when its betrayals of conservative principles were ignored or justified by the movement's hacks instead of exposed (the Bush era, more or less) it's going to demoralize its grass roots in record time.

It took the Bush administration two terms to fully depress the religious right, after decades of that movement studiously ignoring the fact that the GOP never restored prayer in school or overturned Roe v. Wade. I'm guessing Mitch McConnell will demoralize the Tea Parties in half the time, especially if people like Charles Krauthammer -- the third-favorite pundit of right-wing activists -- are already going around calling the Obama-McConnell tax compromise a swindle.

The Obama-McConnell tax compromise was a substantive victory for Republican policies, even if it looks like a temporary "messaging" win for Obama. Can you imagine how the movement will react to any sort of real compromise? Polling has already shown Republican voters hate the notion of their leaders compromising with Democrats. But their outrage, of course, will only come into being if the partisan press signals that congressional Republicans are compromising.

Maybe, perversely, the best way for Obama to battle the new Republican Congress is to actually work together with them as much as possible. Or at least look like he is. The Obama=Hitler message has been hammered home so effectively that he should just organize a friendly golf outing with John Boehner and make sure the Fox cameras are rolling while they share a smoke and a friendly chat. Then, sit back and watch the new conservative movement stay home.

(Of course, Obama should be careful to not work with the new Congress too much, because on the whole these people are insane.)