Nic Cage and the joy of the celebrity meltdown 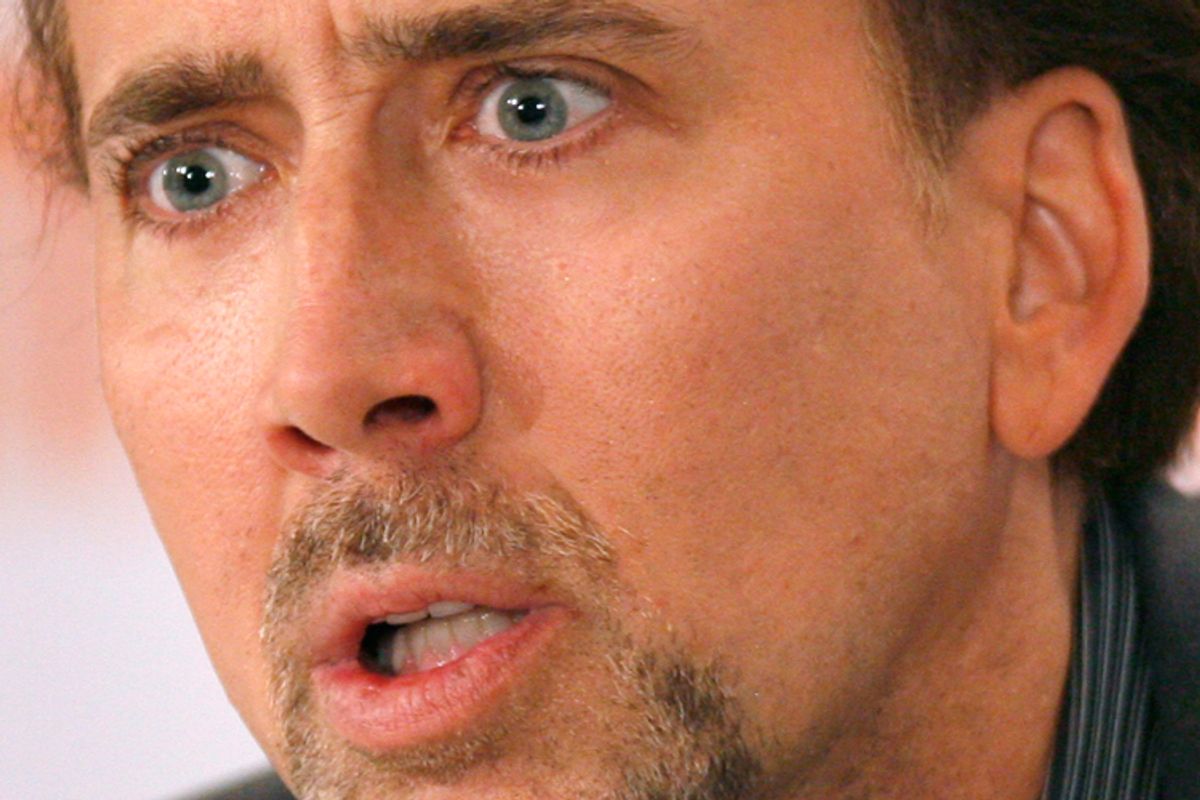 You and I do not make $20 million to pretend to hunt for treasure. We do not have Academy Awards and personal assistants; we have never owned any castles or pyramids. We generally don't walk around with a team of stylists and publicists standing between us and our unguarded thoughts, carefully prepping our little anecdotes for the next time we sit down with Leno.

So thank God for Twitter, YouTube and every other medium that exists to remind us that no matter how famous a person is, no matter big his comic book collection may be, he can still screw up and melt down like the rest of us slobs. And thank you, Nicolas Cage.

In a boon for YouTube addicts across the world, Cage, who is currently in Romania filming the incredibly necessary sequel to "Ghost Rider," lost his cool during a squabble outside a Bucharest nightclub Sunday morning. His expletive-riddled, inevitably recorded tirade -- featuring such instantly quotable lines as "Go for it, brother," "I'll fucking die because of honor," and "See my eyes?" -- turned up on the local news. And faster than you can say "Mel Gibson," the freakout was going viral.

Cage now joins an elite group of notable celebrity hotheads whose meltdowns are now inexorably part of their personae. David O. Russell just racked up six Golden Globe nominations for "The Fighter," including best director, but who can think of him without remembering him calling Lily Tomlin, among other things, a "fucking bitch" while trashing the set on "I Heart Huckabees"?  Speaking of "The Fighter," the lives of a legion of YouTube remixers would be much poorer without Christian Bale's legendary meltdown on the set of "Terminator Salvation." Bale is a respected thespian. He's also the man who made "We're fucking done professionally, fucking ass" the go-to workplace quote of the decade if not eternity. And when a long-lost clip of Bill O'Reilly bellowing, "We'll do it live! WE'LL DO IT LIVE, FUCK IT!" moments before introducing a clip of Sting for "Inside Edition," it was over 8 million YouTube hits of pure anger-management schadenfreude.

The celebrity flip out, like the unfortunate celebrity sex tape, is weirdly, endlessly compelling because it gives us, the unwashed hoi polloi, the illusion of having something over on the people who have everything. That guy on the cover of People may just have bought his own island in the Caribbean, but it doesn't make him any less ridiculous than the rest of us. In fact, to anyone who's never yelled, "You should just fucking smile, and blow me!" it might make him considerably more.

The relentless tabloid appetite for a money shot of a movie star with a finger up her nose, and those big payouts for incriminating voice mails, must eventually affect anyone in the public eye. Our stars have as much right to scratch their butts and chew with their mouths open as the rest of us. They're still human and imperfect. And the really tragic falls from grace, the sad displays of sustance abuse or mental illness, are made all the more harsh by the glare of attention.

But there's something about a really epic display of plain old bad behavior that satisfies. It seems so out of touch and ungrateful in the midst of all the privilege that it's not just remix-ready odd -- it's almost comforting. As the gap between rich and poor gets wider and deeper and ever more haves live separate lives from a swelling pool of have-nots, a little freakout now and then suggests that even somebodies don't have everything. It makes them seem foolish and angry and unhappy. A minor loss of dignity for Nicolas Cage doesn't mean an  uptick in dignity for the rest of the world, but it's ever so slightly empowering. And if any other Academy Award winners feel close to the hair trigger on a set or outside a nightclub any time soon, go for it brothers. We could use the relief.