How fresh funding gives the trending company a valuation at $3.7 billion -- about twice that of the New York Times 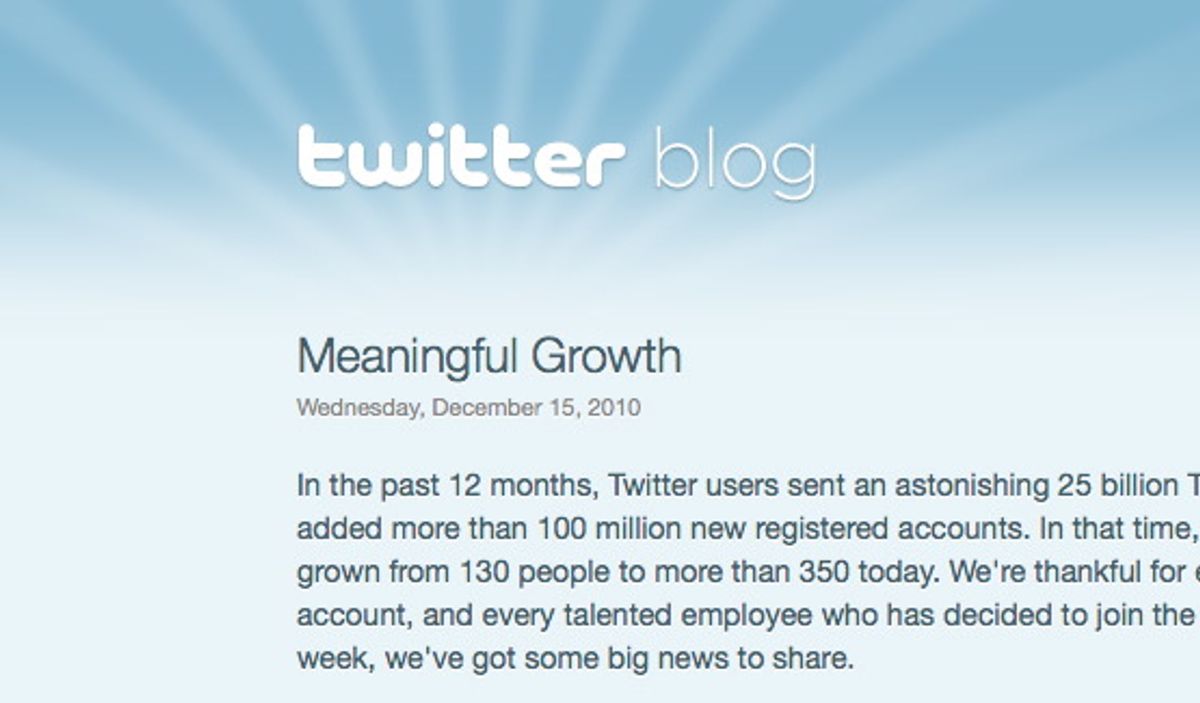 Twitter, Inc. raked in $200 million of fresh funding from leading investors yesterday valuing the three-year old company at a cool $3.7 billion. Bookending the good news came a couple interesting additions to Twitter’s board: Mike McCue, chief of the iPad app of the year (FlipBoard), and David Rosenblatt, former president of global advertising at Google and once CEO of DoubleClick. While both of the new board members hint at Twitter’s progress in monetizing their service, the new funding buys them more time to figure that out.

Including that $3.7 figure, there’s a tidy trinity to Twitter’s situation. Twitter CEO Dick Costollo—the company’s third chief in as many years—announced the funding on the company blog Wednesday afternoon and touted the company’s tripling in size and new additions to the board in lieu of the specific investment dollar amounts.

In the past 12 months, Twitter users sent an astonishing 25 billion Tweets and we added more than 100 million new registered accounts. In that time, our team has grown from 130 people to more than 350 today…

As part of a significant new round of funding with investor Kleiner Perkins Caufield & Byers and existing investors, we've added two new members to Twitter's board of directors. Please join us in welcoming Mike McCue and David Rosenblatt. The experience these new directors bring to Twitter, along with this renewed investment, will help us continue to grow as a company and business.

All Things Digital blogger Kara Swisher announced the numbers later that day, and Twitter has since confirmed the details. The $200 million amount makes this the year’s second largest investment after the $350 million raised by electric car battery swapping company Better Place, Inc.

Given Twitter’s relative cachet as a fast-growing, widely used, world-changing service and all that, the geek gossip swarmed all over the topic overnight. Fortune’s Dan Primack revealed that other investment firms proposed higher valuations but Kleiner won the negotiations, he suggests, in order to boost their brand recognition with web 2.0 types in the Valley. The Wall Street Journal jumped on the real estate angle suggesting that Twitter would expand its office space. The Los Angeles Times reported that Twitter would expand to Sacramento with a new data center, while an actual New York City office—as opposed to the fake one reported back in September—might also make sense.

Twitter still trails the number one social network, Facebook, by quite a bunch of billions. (Facebook is worth over $45 billion. That’s more than the GDP of half the world’s nations.) However, as a company that self identifies as a “a real-time information network,” Twitter might not have Facebook in its sights as a chief competitor. With over 8% of American adults tweeting, Twitter stands the chance to be the country’s biggest media company. And they’re on the right track. Starting today, Twitter is officially worth almost TWICE as much as the New York Times.

Don’t believe me? The news is trending on Twitter.