When I almost jumped off the Brooklyn Bridge

I thought I was just sleep-deprived. Then one night in December, I began contemplating my suicide 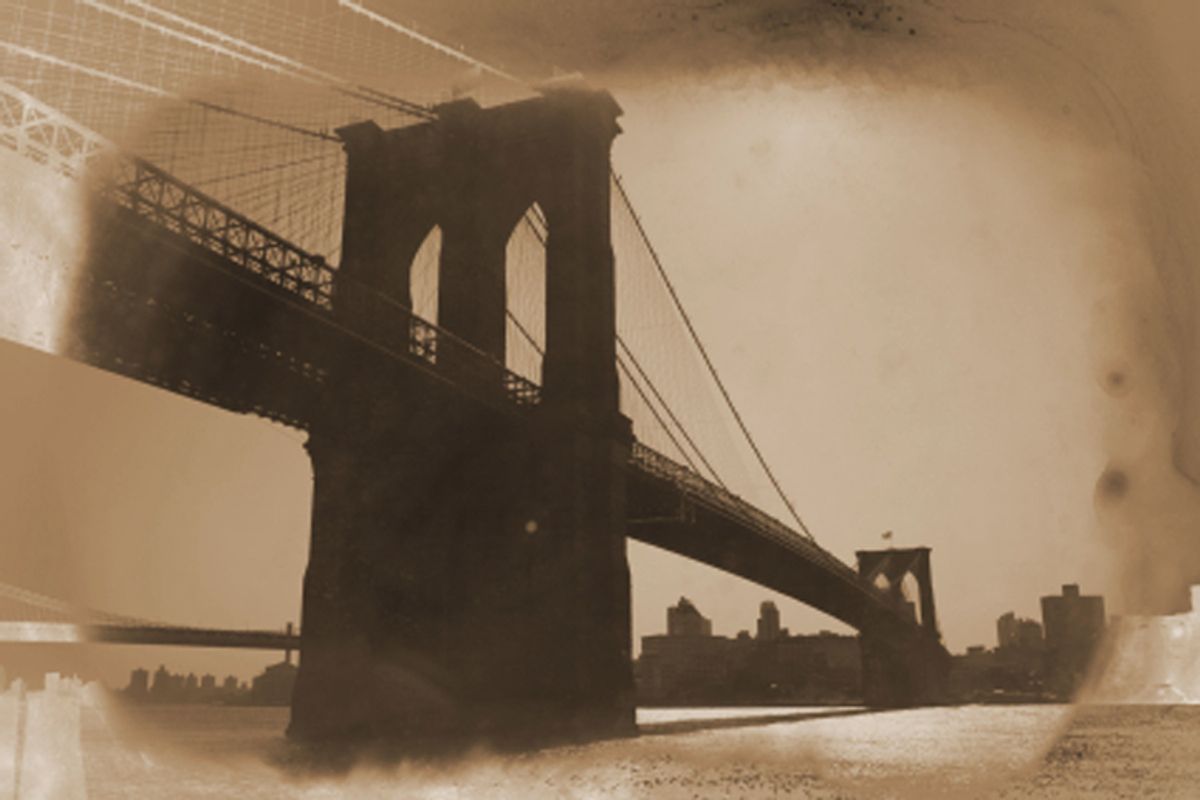 On top of the Brooklyn Bridge late one strange December night, I found myself plotting. I'd text the passwords for my e-mail and Facebook accounts to my closest friend before leaving my phone in my bike basket. (The police would find it and contact her, and she'd understand what I wanted her to do.) Then I'd climb over the railing onto one of the beams stretching above the lanes of traffic. At the edge, I could jump.

Before that night, I'd had passing thoughts that if life wasn't less agonizing by the time I turned, say, 50, I'd end it. It had come to seem normal; that was just where my brain went when I was overwhelmed by stress, unhappiness, exhaustion. I would picture myself falling upon a sword, like some kind of medieval maiden, a (not quite) virgin sacrifice. I'd mentioned these "suicidal ideations" to my shrink, kind of laughing them off, and, indeed, she never seemed too concerned. "I can be so melodramatic," I'd say.

Jumping off a bridge, when you happen to be on the bridge in question, was different. I'd been weeping the whole way up the cyclist path, but it wasn't until I reached the top that the idea took on a startling power. As I stood there in the darkness, watching the cars pass beneath me, I suddenly felt like a real threat to myself. If I lost my balance and fell off the beam into the traffic before I made it all the way out, the impact surely wouldn't kill me, but would a car? If I did jump, what would happen after I hit the water? Would I break so many bones that I'd die immediately? Or would I drown?

I'd never thought of myself as seriously depressed. Sure, my childhood had been unhappy -- my mother died of cancer; my father and I fought bitterly and constantly; I spent four months of my freshmen year of high school hospitalized for anorexia -- and I'd evolved into a brooder. But by my early 30s, mental illness seemed long gone. I had some "issues" to "work through" -- I had problems getting into healthy romantic relationships, I made impractical career moves, I refused to give up on certain unrealistic dreams -- but hey, that describes half of New York.

My real problem, I would've told you, was exhaustion. Not that I didn't have time to sleep; it's that I couldn't. My insomnia started eight years before, after one of my best friends killed himself on his 28th birthday. (He'd taken Ecstasy for the first time, which led to a manic fit, followed by a severe crash.) In the following weeks and months, I would wake up in the middle of the night, haunted by questions: Why had he done it? Why hadn't he told me what he was thinking?

Eventually, I came to terms with his death, but my sleeping never returned to normal. The slightest sound could stir me, and I'd be up till dawn, or I'd awake suddenly after six or seven hours, even eight, feeling grainy and exhausted but unable to go back to sleep. I did all the things that are supposed to improve sleep quality: I used a white noise machine, earplugs, an eye mask. I exercised regularly, maintained a regular sleep-wake schedule as best I could, quit booze entirely, and even gave up caffeine (for a while). Nothing worked. I plodded through my days with a strange hangover -- an achiness, like I was always on the verge of getting the flu. Sleeping pills were only a temporary relief. Both Benadryl and melatonin worked, but left me in a groggy daze.

My exhaustion shaped -- or mangled -- my life. I became flaky about meeting up with friends. I'd say yes to social outings, then bail at the last minute. Whenever I managed to get involved with a guy, I rarely spent the night at his place; if he stayed at mine, I pulled out the love seat. Luckily, I was able to work as a freelance writer, because after a few years, I couldn't imagine ever having a 9-to-5 job again. Often, I simply could not make it through the day without napping. It's embarrassing to remember all those awful customer service calls, where I'd try to explain whatever computer problem or Internet issue I was having, only to break down in tears while the disembodied voice on the other line tried to calm me down. I'd cry on the mat at the gym or on the subway platform because I felt so tired that trying to retain my posture and composure till I got home seemed daunting. On one occasion, I fell apart in front of my former landlord, who took me in her arms and gently suggested Prozac. I appreciated her compassion, but depression wasn't my problem. Fatigue was.

By the time I found myself contemplating diving off the edge of Manhattan, I felt out of options: I'd tried everything to no avail. A life of chronic debilitation just didn't seem worth living. The straw that broke the camel's back was absurdly minor: That night, an ex, who I'd assumed would try to reconcile with me eventually, told me he had a new girlfriend. I didn't want to get back together with him but I'd been propping myself up with the idea that he loved me, and even minor setbacks like realizing he didn't required more energy than I had. How could I possibly slog through another half-lifetime of them?

Before that day, being at the top of the Brooklyn Bridge had lifted my spirits during some of my bleakest moments. I loved the urban majesty: the red-pink sun sinking between Jersey and downtown Manhattan; the yellow moon that sometimes hangs so low over Brooklyn it's nearly hidden among the building tops; the train crawling along the Manhattan Bridge like some outsize glowworm. To stand on that bridge was to feel on top of New York City -- for once!

But on that terrible night, life didn't seem full of grandeur and possibility; it seemed relentless. Directly in front of me was a way out. Knowing how exhilarated I normally felt there made me realize I wasn't in my right mind; so did the sense of terror that dominated some part of my consciousness. Moved by my body more than my brain, I pushed my bike down to street level, too vertiginous to ride. When I got home, I knew I was clinically depressed.

The next day -- feeling furious with my shrink for letting me get to such a scary low -- I paid an emergency visit to my physician. After I told her what had happened, she prescribed an antidepressant, explaining my fatigue was probably either caused by, or a symptom of, depression.

After a few weeks on Celexa, I found myself sleeping remarkably well and feeling healthier, happier and more stable than I had in nearly a decade. All sorts of things began to seem possible again -- going away on vacation, working for hours at a stretch, making social plans in advance. The one negative side effect: Though I was eating less and exercising a bit more, I was rapidly gaining weight. So my doctor and I experimented with a number of alternatives till we found a good medication cocktail; now, I'm taking Wellbutrin along with five milligrams of an herbal supplement called 5-HTP (a precursor to melatonin, a neurochemical the body makes to put itself to sleep) before bed. I haven't felt so good since high school.

I'd never attached any real stigma to psychopharmaceutical drugs. I appreciated how crucial they were for people with bipolar disorder and schizophrenia, and saw firsthand how much antidepressants had helped my father after decades of mood swings. All the same, I had the impression that most of the people I knew who were taking them didn't really need them; they all seemed so well-adjusted! (Funny how that works, isn't it?) Now I appreciate just how crucial they can be for functioning. And when I saw the reports that they don't help cases of mild depression, all I could think was, "Welp, mine must've been serious, because they sure work for me."

This week marks two years since my night on the bridge. And though I still have occasional dreary moments, offing myself no longer seems appealing, not now or 10 years down the road. I don't cry uncontrollably in public anymore. I can take the subway without fear I'll have an emotional breakdown somewhere underneath New York City. I can depend on my body to come through for me and restore itself when darkness falls. My morale is sturdier, too. When I bike over the Brooklyn Bridge these days, I don't feel fear. I feel happy. I feel alive.

In early 2012, Free Press will publish the book that Maura Kelly is co-writing, tentatively titled, "Jane, Don't Err: What Great Literature Can Teach Us About Moby Dickheads, Brief Wondrous Relationships, and Love in the Time of Internet Dating."