Getting to Assange through Manning 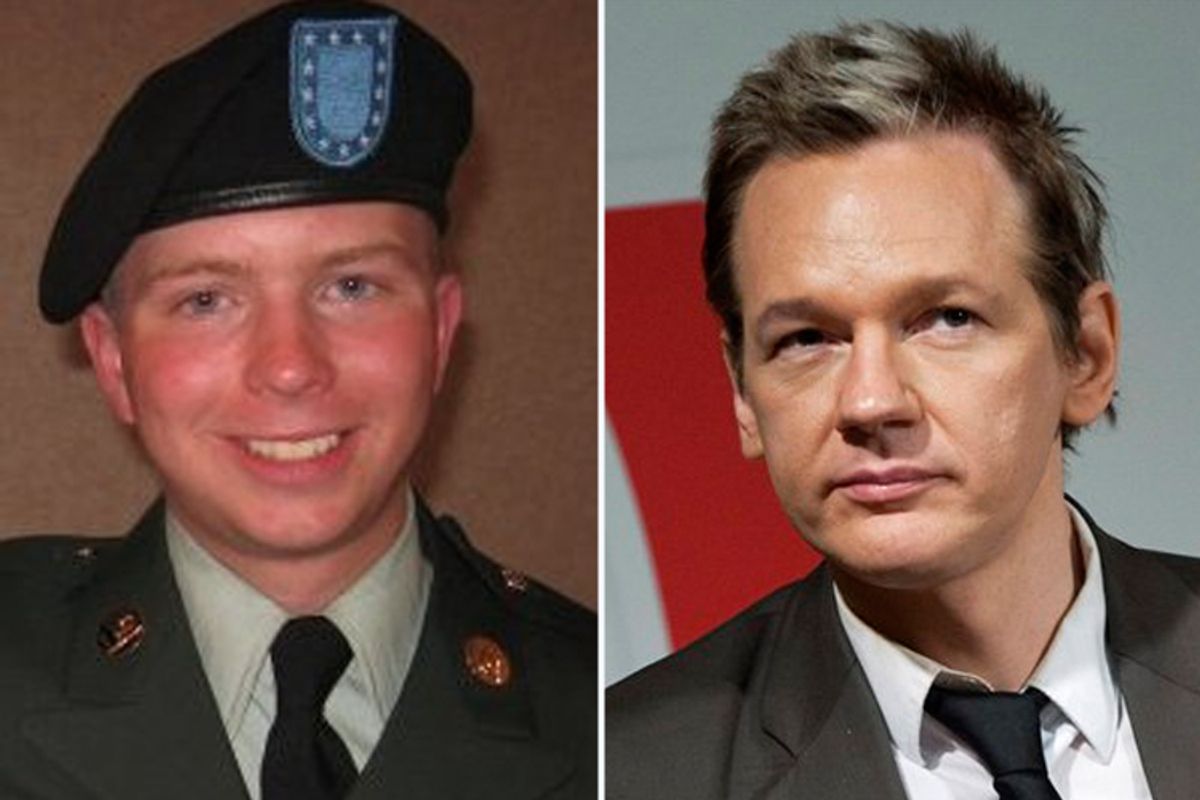 In The New York Times this morning, Charlie Savage describes the latest thinking from the DOJ about how to criminally prosecute WikiLeaks and Julian Assange.  Federal investigators are "are looking for evidence of any collusion" between WikiLeaks and Bradley Manning -- "trying to find out whether Mr. Assange encouraged or even helped" the Army Private leak the documents -- and then "charge him as a conspirator in the leak, not just as a passive recipient of the documents who then published them."  To achieve this, it is particularly important to "persuade Private Manning to testify against Mr. Assange."  I want to make two points about this.

First, the Obama administration faces what it perceives to be a serious dilemma:  it is -- as Savage writes -- "under intense pressure to make an example of [Assange] as a deterrent to further mass leaking," but nothing Assange or WikiLeaks has done actually violates the law.  Moreover, as these Columbia Journalism School professors explain in opposing prosecutions, it is impossible to invent theories to indict them without simultaneously criminalizing much of investigative journalism.  Thus, claiming that WikiLeaks does not merely receive and publish classified information, but rather actively seeks it and helps the leakers, is the DOJ's attempt to distinguish it from "traditional" journalism.  As Savage writes, this theory would mean "the government would not have to confront awkward questions about why it is not also prosecuting traditional news organizations or investigative journalists who also disclose information the government says should be kept secret — including The New York Times."

But this distinction is totally illusory.  Very rarely do investigative journalists merely act as passive recipients of classified information; secret government programs aren't typically reported because leaks just suddenly show up one day in the email box of a passive reporter.  Journalists virtually always take affirmative steps to encourage its dissemination.  They try to cajole leakers to turn over documents to verify their claims and consent to their publication.  They call other sources to obtain confirmation and elaboration in the form of further leaks and documents.  Jim Risen and Eric Lichtblau described how they granted anonymity to "nearly a dozen current and former officials" to induce them to reveal information about Bush's NSA eavesdropping program.  Dana Priest contacted numerous "U.S. and foreign officials" to reveal the details of the CIA's "black site" program.  Both stories won Pulitzer Prizes and entailed numerous, active steps to cajole sources to reveal classified information for publication.

In sum, investigative journalists routinely -- really, by definition -- do exactly that which the DOJ's new theory would seek to prove WikiLeaks did.  To indict someone as a criminal "conspirator" in a leak on the ground that they took steps to encourage the disclosures would be to criminalize investigative journalism every bit as much as charging Assange with "espionage" for publishing classified information.

Second, Savage's story appears to shed substantial light on my story from yesterday about the repressive conditions under which Manning is being detained.  The need to have Manning make incriminating statements against Assange -- to get him to claim that Assange actively, in advance, helped Manning access and leak these documents -- would be one obvious reason for subjecting Manning to such inhumane conditions:  if you want to have better treatment, you must incriminate Assange.  In The Huffington Post yesterday, Marcus Baram quoted Jeff Paterson, who runs Manning's legal defense fund, as saying that Manning has been extremely upset by the conditions of his detention but had not gone public about them in deference to his attorney's efforts to negotiate better treatment.

Whatever else is true, the DOJ seems intent on pressuring Manning to incriminate Assange.  It would be bizarre indeed to make a deal with the leaking government employee in order to incriminate the non-government-employee who merely published the classified information.  But that may very well at least partially explain (though obviously not remotely justify) why the Government is holding Manning under such repressive conditions:  in order to "induce" him to say what they need him to say in order to indict WikiLeaks and Assange.

On MSNBC last night, Keith Olbermann did a segment on the conditions of Manning's incarceration, with FBI whistleblower Colleen Rowley.  At least on its website, CBS News also reported on the story.  And I was on Democracy Now this morning elaborating on my Manning article yesterday, as well as discussing Savage's article this morning and the imminent release of Assange from prison:

UPDATE:  Several others make similar points about the DOJ's prosecution theory, including Yale Law Professor Jack Balkin ("the conspiracy theory also threatens traditional journalists as well"); former Bush OLC Chief and Harvard Law Professor Jack Goldsmith ("it would not distinguish the Times and scores of other media outlets in the many cases in which reporters successfully solicit and arrange to receive classified information and documents directly from government officials" and "would be a fateful step for traditional press freedoms in the United States"); Politico's Josh Gerstein ("Reporters seek classified information all the time in telephone conversations, in private meetings and other contexts" and thus "the distinction . . . strikes me as patently ridiculous"); and The American Prospect's Adam Serwer ("the slippery slope is only the slightest bit less steep" than charging Assange under the Espionage Act).

Indeed, Bob Woodward's whole purpose in life at this point is to cajole, pressure and even manipulate government officials to disclose classified information to him for him to publish in his books, which he routinely does.  Does that make him a criminal "conspirator"?  Under the DOJ's theory, it would.  All of this underscores one unavoidable fact:  there is no way to prosecute Assange and WikiLeaks without criminalizing journalism because WikiLeaks is engaged in pure journalistic acts:  uncovering and publicizing the secret conduct of the world's most powerful factions.  It is that conduct -- and not any supposed crime -- which explains why the DOJ is so desperate to prosecute.

(2) This article from The Independent describes how U.S. officials view "persuading" Manning to testify against WikiLeaks -- specifically "persuading" him to say that WikiLeaks helped him access and disseminate classified information -- is "crucial" to a successful prosecution of Assange.