Why Michael Vick deserves a dog 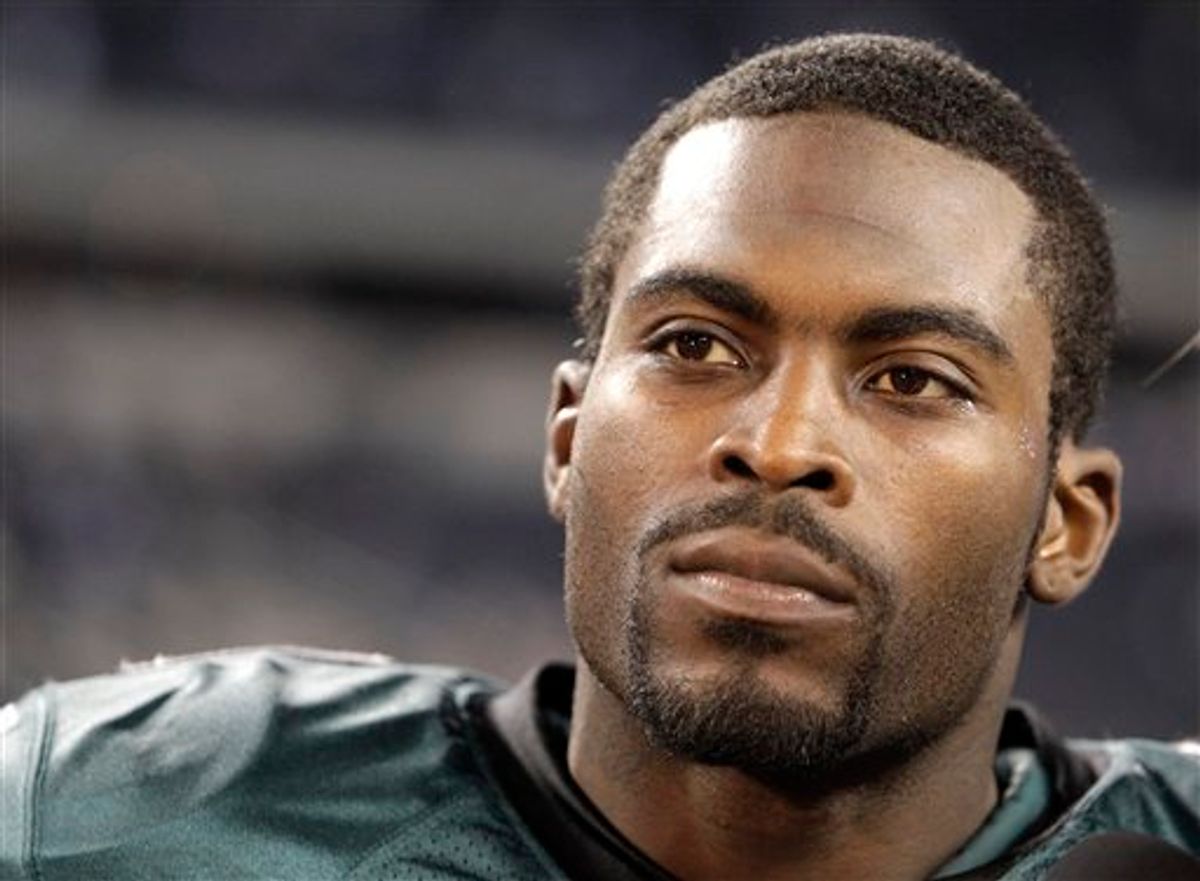 FILE - This Dec. 12, 2010, file photo shows Philadelphia Eagles quarterback Michael Vick after an NFL football game against the Dallas Cowboys, in Arlington, Texas. The convicted dogfighting-ring operator tells TheGrio.com in a video interview that he genuinely cares for animals and one day hopes to have a dog as a household pet. Vick says it would a "big step" in his rehabilitation process.(AP Photo/LM Otero, File) (AP)
--

The 30-year-old Eagles quarterback, in addition to being one of the best players in the NFL right now, also bears the dubious distinction of being one of the most notorious animal abusers in recent history. It hasn't been that long since Vick served 18 months in prison for conspiracy for his involvement in a dogfighting ring run out of his Virginia property. Vick's appropriately named Bad Newz dogfighting ring was abhorrent enough, but what happened to losing dogs added another shocking dimension to the story: Canines were routinely put down by hanging, drowning, electrocution and sometimes simply slamming them to the ground.

It would be difficult to classify anyone involved in such an enterprise as anything short of a monster. So when Vick, whose probation terms still forbid him from buying, selling or owning a dog, told TheGrio this week that "I would love to get another dog in the future," the notion wasn't exactly greeted with "happiness is a warm puppy" enthusiasm.

Lisa Lange, vice president of PETA, swiftly retorted to the Atlanta Constitution Journal, "Just as convicted pedophiles aren’t allowed free access to children, anyone who is responsible for hanging, electrocuting, or shooting dogs and who causes them to suffer in other unimaginable ways should never again be allowed access to dogs. All things considered, it is a very small price to pay, especially compared to the suffering endured by the dogs who were abused and killed in the Bad Newz Kennels." And commenters on TheGrio were almost unanimous in their opinions. "He should NEVER, EVER be able to own another living creature as long as he lives!" wrote one, while another cracked, "Michael Vick loves his dogs so much that he beat them, electrocuted them, drowned them."

But Vick, who has voluntarily been doing outreach for the Humane Society and speaking out against dogfighting since his release from prison, said, "I think it would be a big step for me in the rehabilitation process. I think just to have a pet in my household and to show people that I genuinely care, and my love, and my passion for animals."

For many, that sentiment of love is too little, too late, and even Humane Society president Wayne Pacelle wrote in his blog this week, "It's too soon for Michael Vick to have a dog. Pet-keeping is a privilege and he lost that privilege when he committed atrocious acts of cruelty in the months and years before his arrest in 2007." But Pacelle added, "If a perpetrator serves time and gets counseling, and if they show they can be an upstanding member of society, then maybe, under the right circumstances and after several years of not being allowed to have a pet, then they could have their pet-keeping privileges reinstated. Where the human-animal bond has been broken, we want it to be restored."

When it comes to broken trust, sorry isn't the hardest word to say; forgiveness is. The Internet and the relentless 24-hour news cycle make it all too easy to keep ripping open old wounds, to remind us of the crimes of the past, especially crimes that impact society at large. If Tiger Woods cheats on his wife or Amy Winehouse gets drunk at home, we can have an opinion but don't get a say in their private failings. When the sin is greater, atonement is harder. We can wonder, rightly, whether a Chris Brown is once an abuser, always an abuser, or whether Vince Neil should be ever allowed behind the wheel.  We can forever define public figures by their worst crimes -- their drunk driving escapades, their financial misdeeds, their stunning cruelties.

Yet sustained outrage benefits no one. And while the unrepentant and the demonstrably unreformable don't deserve second or third chances, society has to allow for the possibility of redemption. If Michael Vick is always going to be that dogfighting guy, what's his incentive to not be? What was the point of his jail term and current volunteer work? If we forever treat people like the person they were at their lowest, most despicable moments, how can we expect them not to believe that's who they are, and behave accordingly? As Pacelle wrote, "We must be open to the possibility that rehabilitation is possible, and faithful to our hope that people can change." And if we believe in and support the abundant goodness of businesses that include "humane" in their names, we have to believe that word is as applicable to people, even people like Michael Vick, as it is to animals.