The lies I tell to keep Santa real

It's not long before my girls are jaded middle schoolers. Can't I let them believe in magic a little longer? 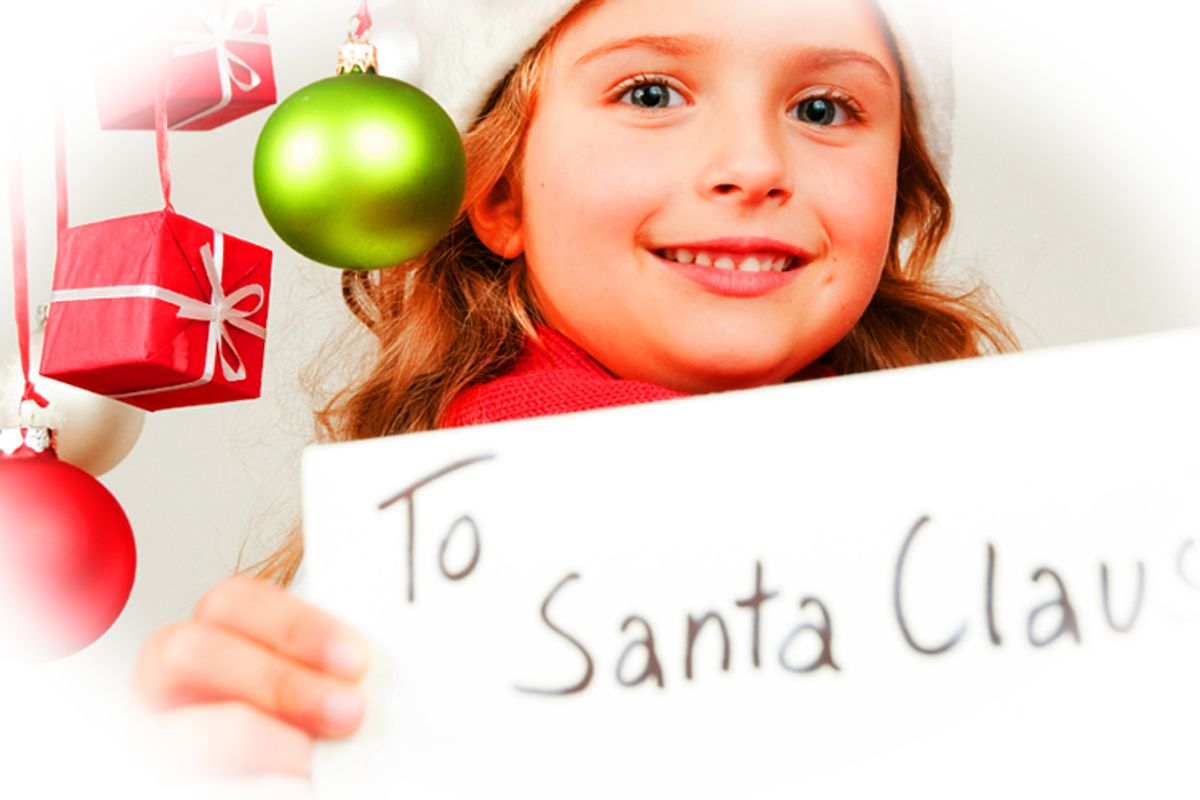 Christmas 2010 might be the last year my 9-year-old daughter believes in Santa Claus. That'll pressure the 6-year-old into disbelief, too, meaning our nuclear family will pass a phase in our own particular holiday culture that I'm not ready for yet. Next year is the year of middle school sarcasm and wanting $400 presents that everyone knows are made by techies at Apple and not toymakers employed by St. Nicholas.

"Daddy, I'm looking at all of my fairy dolls and they all say 'Made in China' on them," says an inquisitive 6-year old, holding a Silvermist doll from Disney Fairies. The oldest doesn't pay too much attention, even though the doll was given to her by Santa last year. Instead, she glances up from a blank piece of paper while hunched over a box of colored pencils on the living room floor. She is writing her annual day-after-Thanksgiving letter to Santa Claus. We've been doing this since she was 3. Looking at her, I think that this is the last time we will share this moment as parent and child.

"How should I start the letter different this year, Daddy?" she asks. We send letters to the Santa Claus Main Post Office in the Arctic Circle in Lapland, Finland. A real place. We even got letters back from them two years ago.

That tradition began after my daughter, at 5, discovered in school that the North Pole had no land mass and didn't support life, except for an occasional polar bear in the winter months. I pointed out that Lapland was a hot spot for actual Santa activity and told her that the North Pole was just one of many Santa stories: not real. It was a nice recovery, but year after year, it's getting harder to trick her.

What she doesn't get is the logistics. How can Santa deliver toys around the world in one night? It's not one night. It's two because of world time zones and dates, plus the story that Santa flies through the sky on reindeer is just a story. Years ago, he delivered toys in his hometown by sled, pulled by reindeer. But Santa has a big staff now. The Santas you see, including those in the fake beards who are trying to dress like Santa, represent Santa in other cities and towns and -- upon receiving your letters to Santa -- fill in your wish list with small presents that Santa makes. This is reality, dear. Santa may not be as magical as you think. But don't ruin those stories for others, I say. She's cool with it.

I remember the day that magic died for me. I was on what children's book character Junie B. Jones calls the "stupid, smelly bus" in fourth grade and was told by a friend that there was no Santa and that if I still believed, I was a baby. I asked my mother before I stepped into the house. She told me the truth, standing outside one fall day on our cement front steps. I seemed to radically go from a kid who believed in Santa to a boy on playgrounds learning about sex and smoking. I want to postpone that for my girls. I want to keep them age-appropriate, making friendship bracelets, being innocent in a culture that pushes them out of childhood too fast.

And so, I am our family's one-man Santa-belief crisis control team. I acted this way in my youth, too: If you were going to end up even remotely saddened about this leap into tweenager years of disbelief, it had to be for a good cause.

After the letter to Santa, my oldest daughter and I head to Toys R Us with my brother and his daughter Julia. It'll be the first time that my oldest will go out shopping for her sister and choose the gift that she will give her. In the car, the girls, both in fourth grade, sing Madonna's Christmas carol for the über-rich, "Santa Baby," and talk incessantly.

"What I really want is to be a millionaire," my oldest says.

"So I can buy a mansion for my entire family to live in."

"Me, too. I want to be a millionaire, too," says Julia. "That'd be awesome. Think of the Christmas presents we could buy!" she says, and I can feel the eyes bugging out of her head.

"Christmas is not about getting presents," I say.

"How do you plan on becoming a millionaire, anyway?" my brother asks.

"I'm going to become a nail stylist so I can paint people's nails," my oldest says.

In Toys R Us, the girls go through the aisles. They like everything, but are not greedy. They never say they want this or that. "Jingle Bell Rock" comes on and they start dancing, being girly. My brother picks up a Pop the Pig game and my oldest looks at it: an obese pig you feed supersize hamburgers.

"Hey, Daddy. This is made in China, too!" She actually says this.

"So? Everything I'm wearing is, like, made in China" says Julia. "I got this vest for Christmas from Santa. Made in China."

"Santa gives clothes, Daddy?" my daughter asks. I told her Santa only delivers toys, and not many. Mom and Dad and your uncle buy the rest.

One year I almost lost it. The Santas went haywire. She was 4. Her grandparents on both sides of the family bought her so many gifts marked "Santa" that it took her an embarrassing two days to open them. I made sure that never happened again, because if there is one thing my Currier & Ives Massachusetts Christmas heart can't take is maniacal children ripping open Christmas gift after gift to the point where each one becomes more meaningless than the next.

In the store, I am lost in a Snoopy snow globe when my daughter asks, "Why does Santa make everything in China anyway?"

I guess the good news is, she's inquisitive. And one day, she'll learn about the global economy, and labor markets and how life is not about getting everything you want. Life can be very hard, even sad. But for now, she is just a happy girl at Christmas. And so, like the Grinch thinking up a lie to Cindy Lou Who as she catches him stealing her Christmas tree, I say, "Santa doesn't make every toy in the world. He contracts different toy companies, like Hasbro, who makes toys for him and he places orders at their factories that have relocated to China." It seems to be complicated enough to satisfy her. We head home with a box of Calico Critters for her sister. One is enough.

Now we are decorating our tree. The youngest loads one part of the tree with every ornament she can get a hook on. I stare into a small snow globe ornament I find from my childhood and shake it up, but it doesn't work anymore. So I have to use my imagination to make it the winter wonderland it once was when I was small. It's my hope that, because this holiday has always been special to me, it will always be special to them. And when my oldest finally asks me for a yes or no answer on Santa, I'll tell her the "truth," of course. When St. Nicholas, the original Santa Claus, passed on, people around the world took his place. Where there was once one, there are now many. And when she is older, she can join the pack.