In his telling, integration was peaceful and nothing brought the whole town together like an MLK speech 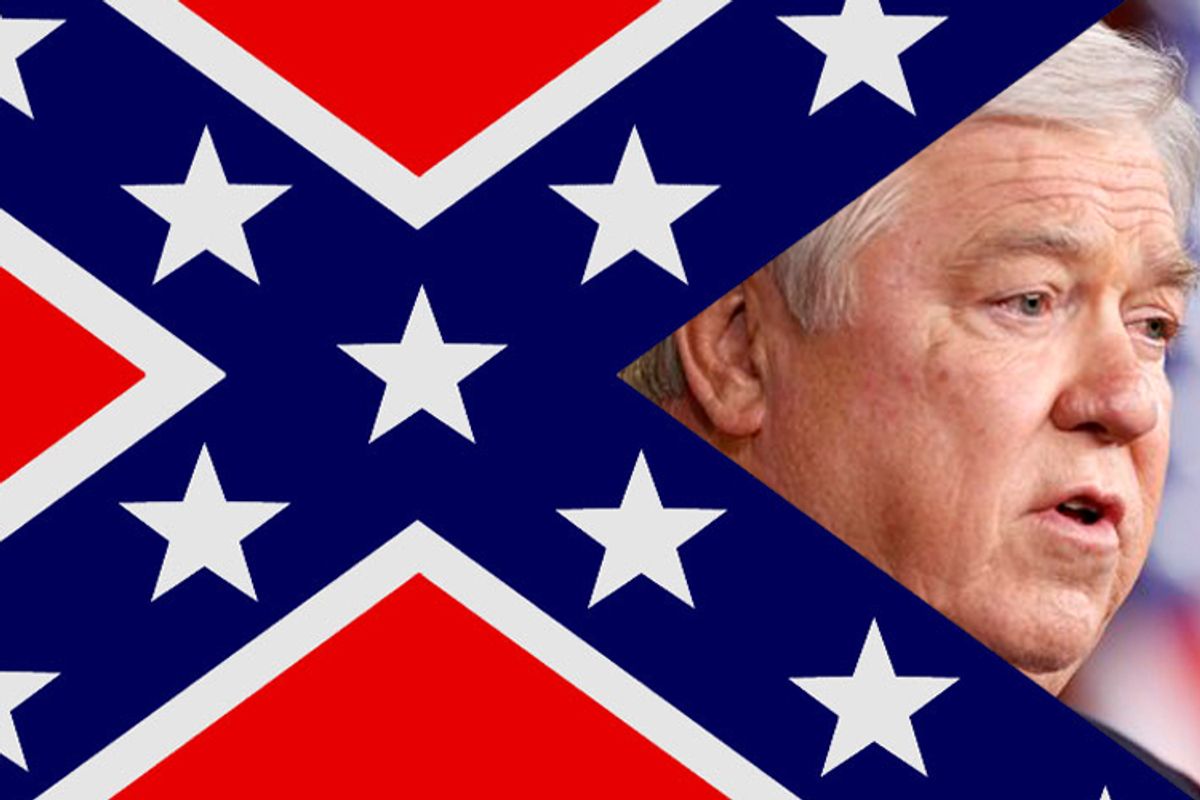 Who'd have figured that the first major blow to Haley Barbour's 2012 White House hopes would be delivered by ... the Weekly Standard? Bill Kristol's magazine is out today with a profile of the Mississippi governor, written by Andrew Ferguson, in which Barbour downplays the upheaval of the civil rights movement and characterizes the notorious White Citizens Councils of the 1950s and 1960s as a force for good.

Asked about coming of age in Yazoo City, Miss., during the civil rights "revolution," Barbour, who was 16 when three civil rights workers were murdered in the state in the summer of 1964, tells Ferguson, "I just don't remember it as being that bad." He goes on to talk of standing "at the periphery" when Martin Luther King Jr. spoke in his hometown (but not really paying attention to what was said because he was too busy looking at girls) and to salute the Citizens Council for (supposedly) ensuring the peaceful integration of Yazoo City's schools -- something that was achieved 15 years after Brown v. Board of Education. Barbour tells Ferguson:

“You heard of the Citizens Councils? Up north they think it was like the KKK. Where I come from it was an organization of town leaders. In Yazoo City they passed a resolution that said anybody who started a chapter of the Klan would get their ass run out of town. If you had a job, you’d lose it. If you had a store, they’d see nobody shopped there. We didn’t have a problem with the Klan in Yazoo City.”

But it wasn't -- and it isn't -- just Northerners who saw a connection between the Citizens Councils and the Klan. Here's how the Arkansas Democrat-Gazette explained the history of the Councils in 1996:

The Delta was home to the Citizens Councils, a name familiar to Southerners who lived through the turbulent 1950s and '60s. The first Citizens Council was organized by ardent segregationists at Indianola during the summer of 1954. By the next year, there were 60,000 members in Mississippi. The councils claimed to oppose violence, but their goal was to prevent black inroads during those nascent days of the civil rights movement and to protect what members characterized as the "Southern way of life." In Mississippi, the state's most powerful farmers, bankers and businessmen were members.

"It was a coterie that could apply frightful pressure on dissenters, whether white or black, in the enclosed, isolated Mississippi society," [Neil] Peirce wrote in 1974. "... By their very presence and rhetoric, the councils created a climate in which racial murder could be tolerated still longer in Mississippi."

The councils enjoyed the support of Democratic Sen. James Eastland and, to a lesser extent, Democratic Sen. John Stennis. The councils also had friends in the governor's mansion. Democrat Ross Barnett won the governor's race in 1959 using a campaign song that said in part: "He's for segregation 100 percent. He's not a moderate like some other gent."

The controversy that his remarks will surely stir -- and that they are already stirring, to judge from Twitter -- underscores how problematic Barbour's political roots are for him. The simple fact that he was born in a segregated town (and that his family strongly supported staunch segregationists, like Jim Eastland) isn't the issue. Bill Clinton was a product of segregation, don't forget.  The problem is that Barbour, unlike Clinton, has never seemed to come to terms with what segregation meant to African-Americans throughout the South -- and what the legacy of segregation continues to mean now.

After all, this is hardly the first time Barbour has tried to whitewash civil rights history. He's previously asserted that the integration of the University of Mississippi in 1962 -- accomplished only through federal intervention and which set off riots that killed two people -- was "a very pleasant experience."

He's also told of building a friendship as a freshman at Ole Miss in 1965 with one of the school's few black students, a woman he identified to a McClatchy reporter last fall as Verna Lee Bailey. "I still love her," Barbour said in the interview. Of course, the woman's real name is Verna Ann Bailey, and when the reporter contacted her, she didn't even recall meeting Barbour. She also remembered the integration of Ole Miss a little differently: "I thought my life was going to end."

And then there was his claim that the South's wholesale transformation from Democratic to Republican stronghold had nothing to do with race and was accomplished by "my generation. My generation who went to integrated schools. I went to integrated college -- never thought twice about it." That would be news to anyone familiar with the share of the vote that Barry Goldwater received in Mississippi in the 1964 presidential election: 87 percent -- or nearly 50 points better than he did in the national popular vote. The truth, of course, is that the passage of Civil Rights in 1964 kicked off a steady, decades-long shift among white Southerners from the Democratic Party (which they'd been loyal to since northern Republicans had tried to impose the "humiliation" of Reconstruction on them) to the GOP. And Barbour, a disciple of Clarke Reed, the father of the modern Mississippi Republican Party, played no small role in bringing that transformation about.

All of this leaves Barbour in a tough spot: The story of his rise in national politics is the story of the rise of the South in the GOP. Race, and the ugly reaction of many white Southerners to integration and civil rights, is at the heart of this story. Barbour can't really run from this past. So instead, he's left to devise an alternate history -- one in which an MLK speech in Yazoo City was a unifying event for the whole community, one in which a white boy named Haley made easy friends with a black girl named "Verna Lee" thanks to the peaceful integration of their school, and one in which Haley Barbour and his generation of white Southerners built the modern Republican Party on a unifying, post-racial philosophy.