Olbermann still doesn't get it 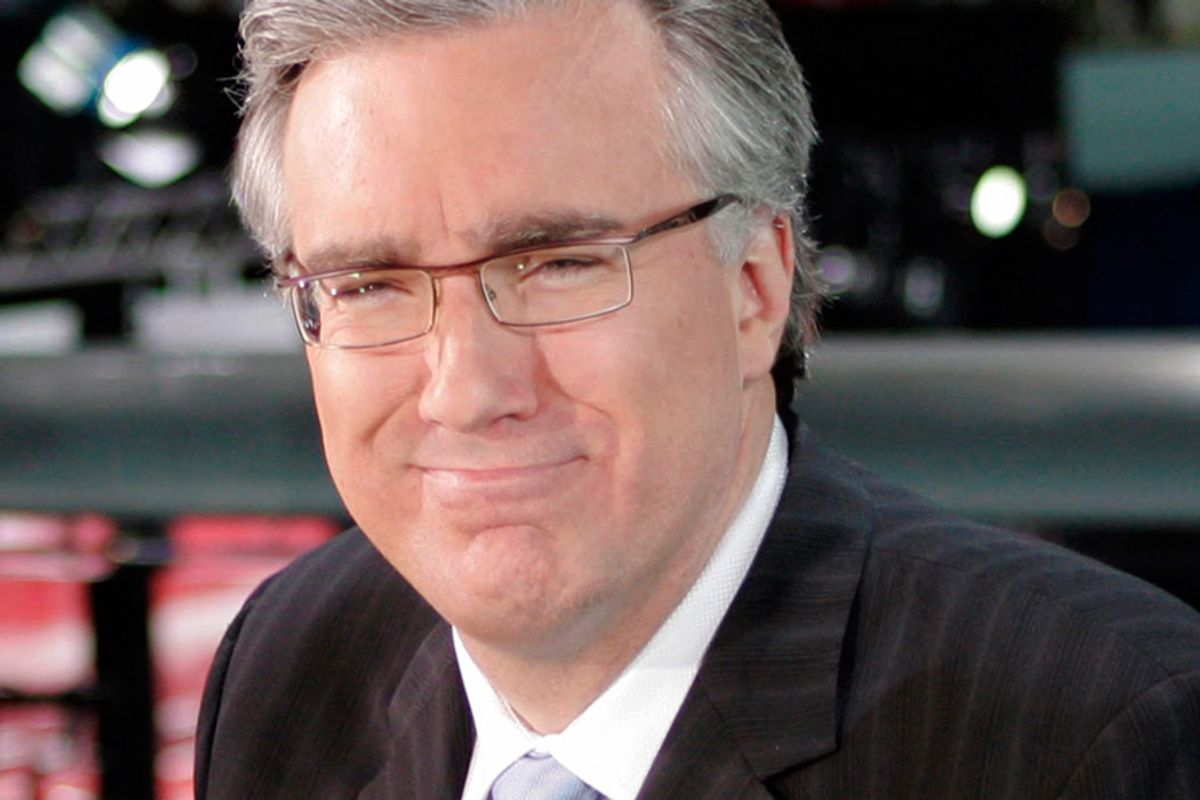 Update: Olbermann has responded on Twitter by blocking me and tweeting, "Your article embarrasses you and your site."

Back from his self-imposed Twitter timeout, Keith Olbermann is lashing out at his feminist critics. As Sady Doyle explained last week in Salon, the online protest was started in response to Michael Moore's mischaracterization of the allegations against Julian Assange. Olbermann became a target after retweeting a link from Bianca Jagger that incorrectly claimed "the term 'rape' in Sweden includes consensual sex without a condom," and that named Assange's accuser (which is generally a journalistic no-no). Overwhelmed by the Twitter campaign, which was waged with the hashtag "mooreandme," Olbermann quit the microblogging site in a huff. This afternoon, after a few days of calm reflection, he tweeted a link to his thoughts on the matter:

I endorse, sympathize with, and empathize with, the rape consciousness goals of #mooreandme, and have already apologized accordingly. But I cannot defend and will not accept their tactics which mirror so many of the attitudes and threats they fight. I do not know of what Julian Assange is guilty, if anything, and neither does anybody else. But given the extraordinary efforts by Sweden to extradite him, to say he is benefiting from some form of rape apologism is not fact-based. It is also unfair to condemn as anti-feminist those who merely address the juxtaposition of this prosecution to the fact that Assange threatens the secret and nefarious activities of dozens of governments.

But, of course, his antagonists are not condemning him for "merely address[ing] the juxtaposition" (a point Kate Harding made clear in her Salon piece about "the rush to smear Assange's accuser"). They allege that he spread misinformation about the accusations against Assange. As Doyle wrote, "People trust journalists: If a journalist says something, like 'the term "rape" in Sweden includes consensual sex without a condom' (Olbermann's own, demonstrably false, as-yet-unredacted words), most people will believe that what he has said is true, and act as if it is true, without doing further research." The protest has consisted of frequent calls for Olbermann to issue a simple correction, to set the record straight for his many followers.

Instead of doing that, though, Olbermann continues: "And I will not engage those who suggest that those who do not prioritize one issue to the exclusion of all others should succumb to forced financial contributions, or should 'kill themselves.'" He followed up by retweeting one of the messages in question, which read in part, "Seriously, kill yourself." Then he retweeted a call for him to donate $20,000 to the anti-rape organization RAINN as atonement. His antagonists have been quick to point out that he cherry-picked the "kill yourself" tweet, which is an exception in the thread, and that the call for "financial contributions" is simply in the interest of rape victims. One user wrote, "we WILL NOT be satisfied UNTIL you retract the false information you publicized re: Assange allegations." Olbermann responded, "you'll have to accept a block instead."

It seems Olbermann's Twitter vacation didn't help him to raise the level of discourse or realize that, as Doyle put it, his "style of old-media authority doesn't hold up" online.