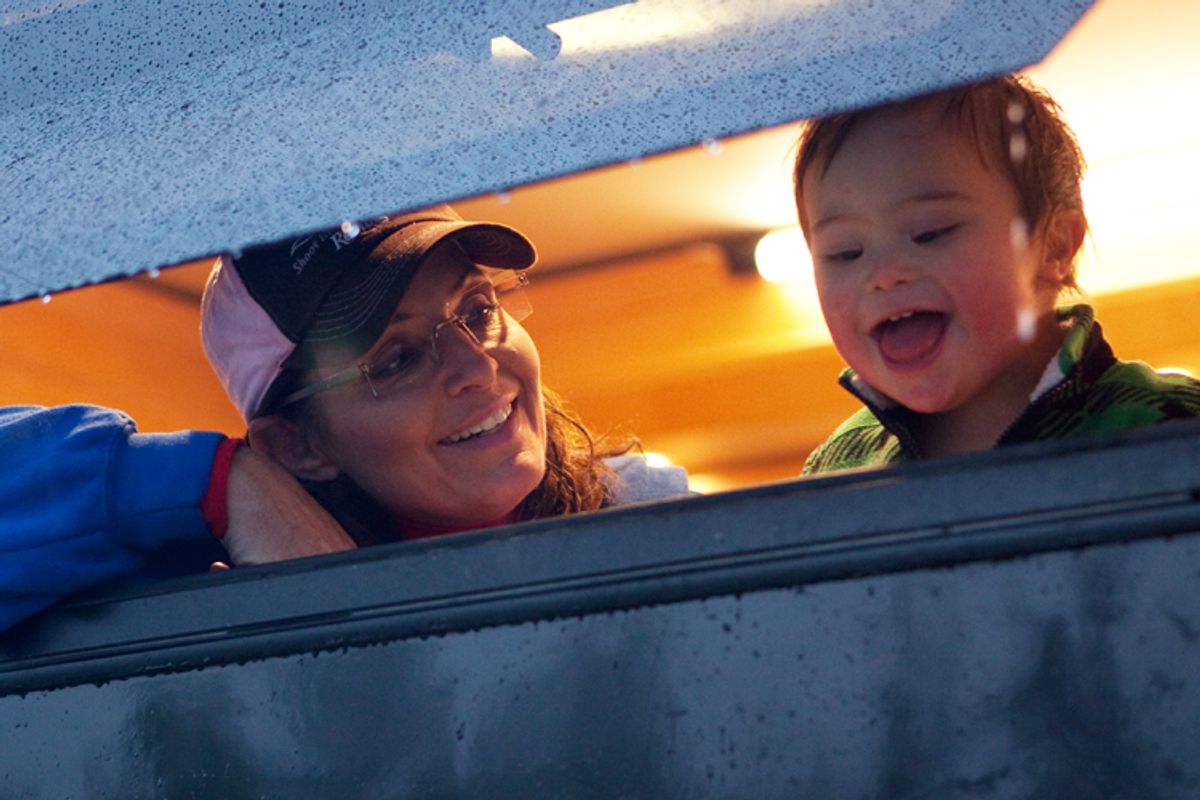 This week's episode began with a close up of a "Live Broadcast, Do Not Enter" sign -- handwritten on cardboard -- which the Palins tacked up outside of their house while Sarah delivered her Fox News commentary from their home studio. No fancy-pants Hollywood set here, commies -- just Todd, a camera and a wooden fish hanging on a wall as set decoration. Welcome to the real America.

Once the broadcast was done, the Palins took to the RV again for their next Alaskan adventure -- this one in multiple parts. First order of business was an exploration of the Talkeetna Mountains, a place that, as Sarah explained, "our family has been visiting for the last 40 years," which of course meant that she'd probably never been there.

The first day they took a rafting trip down the Matanuska River with Piper, Willow and her nephew -- Happy -- led by their white water rafting guide, Mud Flap (Sneezy, Dopey and Doc were meeting up with them later…) "We're going to be barreling down some pretty intense Class 3 rapids today," Sarah explained, which is akin to saying they were going to be partying hard on Grape Ne-Hi and Planter's Cheese Balls (Class 3 rapids are the rafting equivalent of driving over a speed bump at 10 miles per hour in your grandma's Plymouth.)

"We're not going to a 'Star Trek' convention or to the moon today," said the unflappable, and a tad bizarre, Mud Flap as he schooled the Palins on what to do if they fell into the water. "If you don't keep your hand on the T grip of the paddle, you will end up with 'summer teeth,'" he continued, "meaning 'some are in the boat, some are in the water and some are in your mouth."  I loved Mud Flap -- all the more after Piper fell into the water as she ran to the boat, prompting Sarah to warn her "not to use [Mud Flap's] mullet as a towel." Aw, snap Flap!  (I guess you can't be named Mud Flap and be easily offended.)

Once the rafting was done, it was camping time. As Willow canoodled with her boyfriend, Andy, with a "once bitten, twice shy" Todd looking on suspiciously, Sarah searched the RV for s'mores ingredients -- explaining that she was making them "in honor of Michelle Obama who said the other day that [the American people] shouldn't have dessert." (NObama she DIDN'T!)

The non-stop adventure continued as the Palins took to four wheelers to explore more countryside, shoot more guns and escape the "idiots and bloggers who hate our family." (The irony of course being that most of these escapes seem designed to maximize her family's chance of death.)  We ended our adventure at a mining camp to visit the Palins' old friend Bones (who died shortly after the episode was filmed -- rest in peace, Bones) to teach Piper to pan for gold followed by an expedition to find 365 million-year- old seashell fossils in the mountains (I wonder how Sarah's fans are going to react to the news that she apparently doesn't believe the world was created 6,000 years ago.)

The second half of the show was mother/daughter bonding time as Piper and Sarah hit the road and made their first stop at Peggy's, a famous roadside diner. Sarah's first bonding activity was designed "to show Piper what it was like to be on your feet all day, work extremely hard and wait on people," as she strapped on an apron and started taking orders. I'm not sure if the lesson really stuck, as Sarah spent all of her time taking pictures with the customers while Piper wandered around the restaurant playing with her phone. "Mom is a horrible waitress," Piper complained to us later, "I wouldn't tip her because she spends too much time at the table's talking. YABA YABA YABA YABA."  Piper learned a lesson alright, but I'm not sure it was the one Sarah intended.

(Best line of the episode: "She saw what hard work was all about…and [learned] tolerance for other people." All we need is ... tolerance.)

Our whirlwind Alaskan postcard ended with a quick trip to an Iditarod kennel followed by a helicopter ride to visit racers in training on top of the Punchbowl glacier. As the helicopter swooped dramatically over the pristine landscape, Sarah imparted her last lesson of the day: "I wanted to take Piper to show her what the glacier looks like now, and explain to her that centuries from now it's going to look completely different." Given that her mother thinks global warming theories are based on "a bunch of snake oil science," I don't know if Piper realizes that 'completely different' will actually mean 'not there anymore.'