You can't win with the Senate's most sensitive negotiator 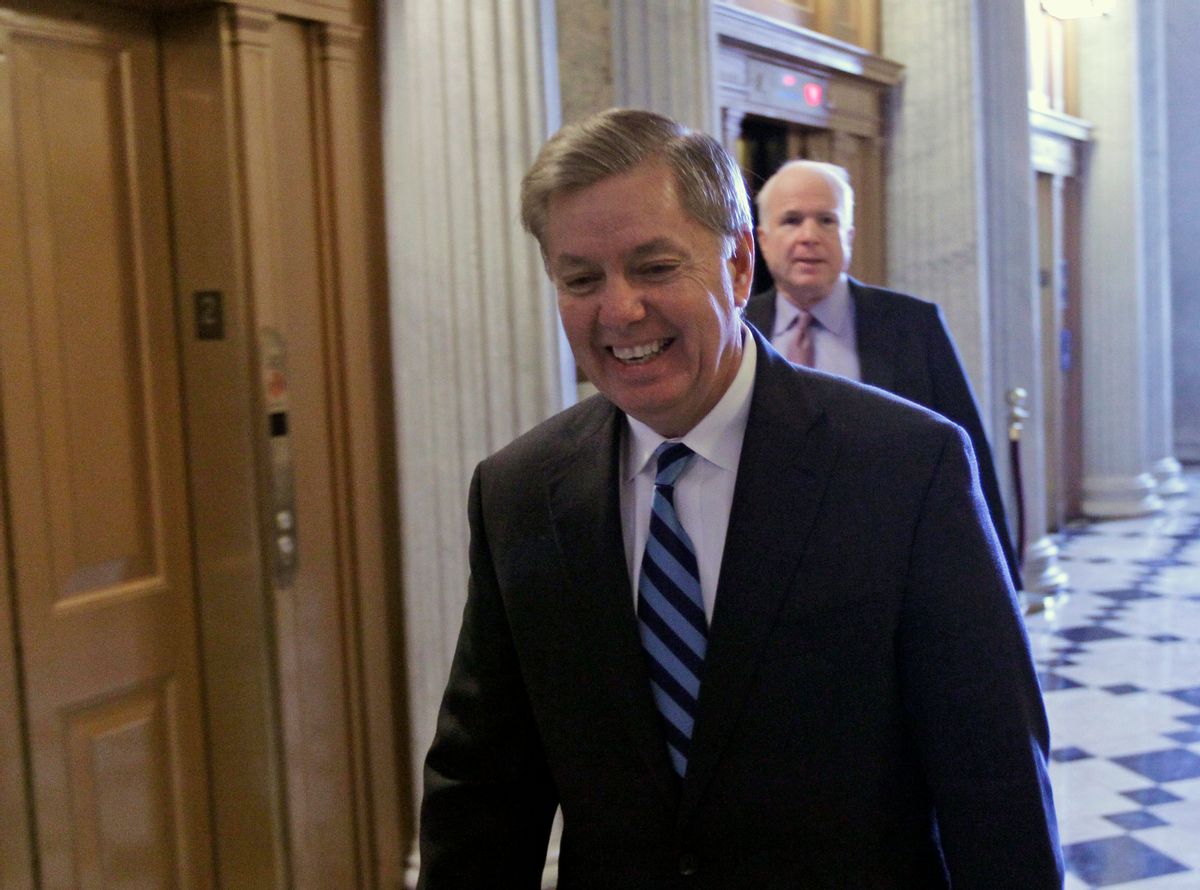 "The order of business in the Senate is simpler than that of the House," according to the official Senate website's "legislative process" section. There follow 23 chapters and thousands of words on committee rules, the amendment process, legislative days versus calendar days, etc., etc. But the single most important rule in the Senate is do whatever Lindsey Graham says.

The South Carolina senator fancies himself the authority on when bills should be considered, how long the amendment process should last, how many days of debate they should receive, and when it is politically "safe" to finally vote on the damn things. (Usually later. No matter the bill, it will usually be safe to actually hold a vote later.)

His tantalizing promise: If you listen to him, your bill will magically become bipartisan! What always happens, though, is that someone screws up -- says the wrong thing to Roll Call, schedules a procedural vote on the wrong day, decides to actually hold a vote instead of waiting forever -- and then Lindsey Graham gets mad and promises that nothing will ever be accomplished in the Senate again.

Despite Graham's best efforts to convince everyone to hold off until it can be successfully killed, the START arms control treaty might actually pass the Senate this week. After a closed-door intelligence briefing yesterday, Republican Scott Brown announced his support for the treaty, and retiring Sen. Judd Gregg signaled that he was learning toward ratifying the treaty. John Kerry said he had the votes.

And Graham's usual buddies-in-bipartisanship are on board. Last week, John McCain said that it was silly to say that Republicans would refuse to support START out of pique if Democrats repealed "don't ask, don't tell": "I think the senator from South Carolina and you and I and every member of this body is very aware of the absolute importance of this treaty and for us to make the decision strictly based on the merits or demerits of the treaty," he said.

Then the Democrats repealed "don't ask, don't tell," and Lindsey Graham -- who'd hinted that he could round up GOP support for START if the lame duck session was devoted solely to tax cuts -- was so mad that he spent Sunday announcing that he couldn't support START until the Russians answered a letter he wrote them. (The Russians are like, do you guys not know how treaties work, or ...?) On Monday, Graham said he wouldn't support the treaty "this year." McCain, at least, continued to attempt to make deals. But Lindsey Graham's pique is legendary, along with his curious sense of how business in the Senate is "supposed" to be conducted.

Say you support immigration reform and comprehensive climate legislation. If you're Lindsey Graham, you announce that you will un-support the climate bill you helped craft with your good friend Joe Lieberman, because:

"What I have withdrawn from is a bill that basically restricts drilling in a way that is never going to happen in the future," Graham said. "I wanted it to safely occur in the future; I don’t want to take it off the table."

But of course the real reason Graham withdrew from the climate bill was because Reid announced his intention to make immigration reform a priority, and Graham wanted to do climate first. Doing things in the wrong order is one of Lindsey Graham's biggest turnoffs.

Of course, three months earlier, Graham was peeved that the White House and Democrats weren't leading the charge to craft immigration legislation. "At the end of the day, the president needs to step it up a little bit," he told Politico.

But apparently Harry Reid was not supposed to do the stepping -- and that's why eventually Graham came out against the DREAM Act, a far-from-comprehensive bill that would've provided a path to citizenship solely for children who spend a decade or more on their very best behavior.

Where some saw the bill as a small, painfully gradual step toward a just outcome for people who came to this country as children and have never known another home, Graham saw "a silly, stupid game."

To close Guantánamo Bay, all master Senate negotiator Lindsey Graham required is that Khalid Sheik Mohammed's civilian terror trial in New York be canceled. The Justice Department didn't listen to Graham, so now, even though the New York trial is apparently canceled anyway, Graham's now declaring that everyone should go to the military tribunals ... at Guantánamo.

Lindsey Graham, earmark opponent who needs earmarks for South Carolina, refused to support the omnibus spending bill because of the earmarks. In this insane Greta van Susteren interview, Graham explained that he's so outraged by the Senate's inability to get things done that he thinks the Senate should adjourn for the year and take care of everything next year:

Legislation is entirely about feelings and deal-making for Graham. He'll join in apparently good-faith efforts to craft pragmatic solutions to complex problems, but the second anyone looks at him the wrong way he'll dive off the bandwagon and accuse everyone else of ruining the compromise by not following some bizarre script that exists solely in Lindsey Graham's head to the letter.

Graham's personal rules of order are a magnitude more insane and complex than "Riddick's Senate Procedure" could ever hope to be. Almost every senator makes obnoxious "process" arguments when they cast votes against things they ostensibly support (Oh, I want to give homeless orphans hot Thanksgiving meals, sure, but unless my colleague Senator Inhofe is allowed to attach an amendment excluding orphans who don't speak English -- an amendment that will fail and that I will not actually vote for -- I simply can't vote for cloture at this time), but Graham's made it an art. If you can call narcissism an art.