Stephen Dorff and Elle Fanning play a movie star and his daughter in "Somewhere," a nearly wordless Hollywood fable 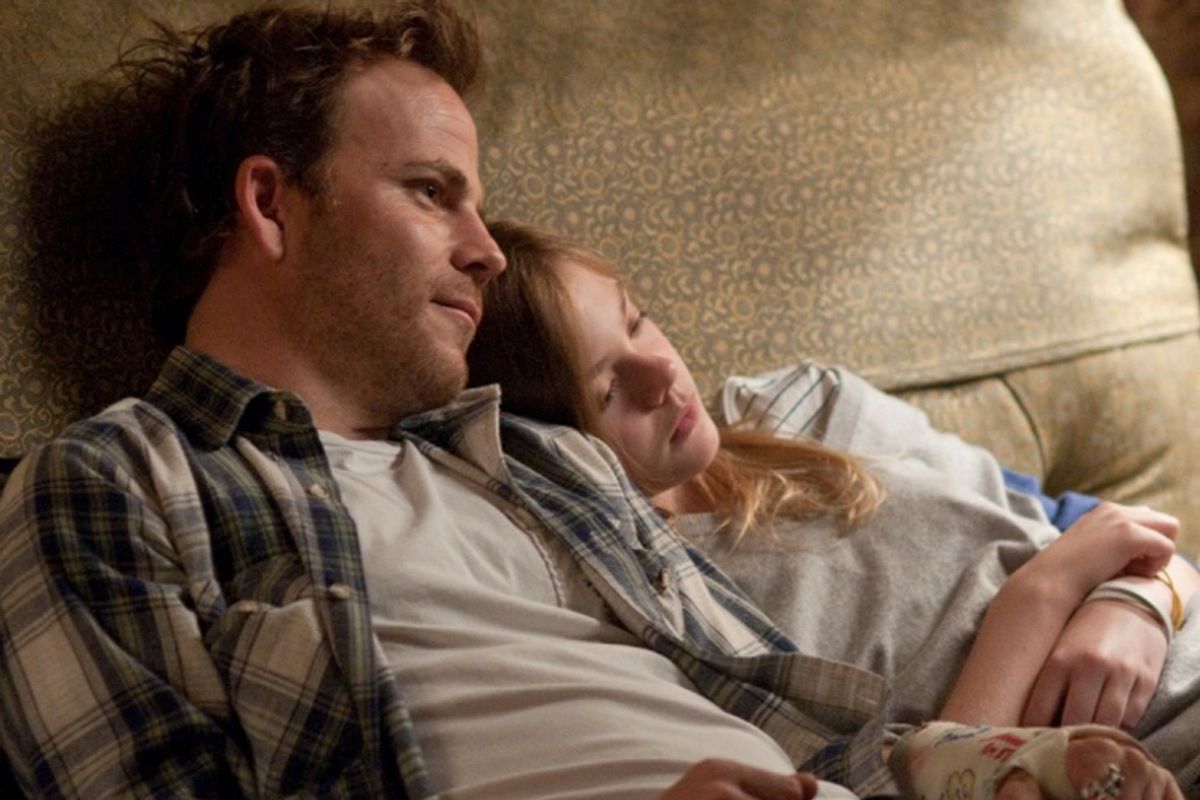 In creating drama, the most basic question is that of how much information to give the viewer and how much to withhold; Hollywood movies are largely based on the premise that every question we may have about the characters and situation will be answered. Four films into an intriguing directing career and approaching age 40, Sofia Coppola is all about withholding more than she surrenders, and never more so than in her new "Somewhere," which is roughly one part critique of celebrity to seven parts opaque art film. That's a pretty good ratio as far as I'm concerned, but the world at large may disagree.

I can tell you the story of "Somewhere" in a single phrase -- an A-list movie star named Johnny Marco (Stephen Dorff) gets a visit from his 11-year-old daughter (Elle Fanning), which forces him to face the emptiness of his existence -- but that conveys very little, perhaps less than nothing, about what the movie's really like. Coppola and her ace cinematographer, Harris Savides, have constructed the film as a series of attention-challenging extended shots, often 45 seconds or longer, that force us to go right through the visible subject and out the other side, Buddhist-meditation style. I don't use that analogy idly; if there's a subject to "Somewhere," it's the impermanence and insubstantiality of the things we think are real.

There is almost no dialogue in the first 20 minutes of "Somewhere," which runs less than 100 minutes in all. The opening shot is an extraordinary landscape composition with no visible human beings: A black Ferrari, which becomes the visual and auditory symbol of Johnny's purposeless existence, roars around a desert track. A couple of minutes later, we get another extended shot, involving a pair of identical-twin strippers performing a pole-dancing routine in Johnny's hotel room. Coppola pushes the scene so long that it loses whatever erotic and/or comic content it once possessed, and becomes awkward and pathetic. Johnny falls asleep. If you're waiting for the story to kick in, you're likely to be incredibly frustrated at this point. This is the story, and you're either in or out.

Coppola barely bothers to tell us the characters' names, and tells us nothing at all about their lives before we meet them, when Johnny (Dorff) is living at the Chateau Marmont, a legendary Hollywood apartment hotel catering to celebrities and their entourages, and 11-year-old Cleo (Fanning) drops in for an extended, unscheduled stay. What's the deal between Johnny and Cleo's mom (Lala Sloatman), who appears only momentarily? How much or how little has Johnny been in Cleo's life? How long has he been a big star and how did he get there? Answers are not provided, although some of them may be implied. Coppola wants us to focus, instead, on what we can actually see. It isn't totally wrong to say that the film has an anthropological or journalistic tone, but more than that it's a formal, aesthetic construction, a matter of pictures and sound.

What we can see is that Johnny isn't totally loathsome or anything -- he's polite to service workers and underlings, doesn't do drugs and pretty much shows up when and where his manager tells him to -- but he's out to lunch, existentially speaking. He fills up his days with meals on the patio, beers on his sofa, aimless drives around L.A. in that Ferrari, parties with people he doesn't know and pursuit of women, who generally don't require much pursuing but provide only temporary distraction. (Let's just say that the episode with the twin strippers isn't the only time he falls asleep in an allegedly stimulating context.) One day he emerges from some chick's room in the Marmont, wearing only a towel, to find Cleo in the hallway outside his door. "Why are you taking a bath across the hall, Daddy?" she asks. (Are we convinced by that line from an 11-year-old? Especially one with this particular father?)

Johnny takes Cleo with him to Milan, where his new movie, which is apparently called "Berlin Agenda" and features a female costar (Michelle Monaghan) who hates his guts, is about to open. They gape at Johnny's ridiculous hotel suite with its private pool and pseudo-Quattrocento décor, and giggle at an outrageous Italian TV spectacle (presented without subtitles) where Johnny is feted. They eat gelato in the middle of the night and watch a dubbed episode of "Friends." Cleo makes no comment about the blonde who joins them for breakfast the next morning, but if looks could kill Johnny might be bleeding out on the floor. It's ordinary parenting -- OK, it's sub-mediocre horndog parenting -- in extraordinary circumstances. But at least he's acting as the father of his child, and that, rather than any epiphany or miraculous transformation, is the point. (If there is an epiphany between Johnny and Cleo, it arrives early and I'm not giving it away.)

Both Dorff and 12-year-old Elle Fanning give lovely, unforced performances. You can feel a tenderness building between them, and also a vast, upwelling reservoir of things they can't or won't talk about. Sofia Coppola presumably knows something about being a celebrity's child, but to speak of the characters in this film as if they existed in conventional, psychological-realist drama is to miss the point at least a little. If you're looking for an intimate or confessional portrait of the relationship between a guy befuddled by fame and his wounded, would-be normal daughter, there are only hints and moments of that here. "Somewhere" is a cool, almost architectural construction, with Savides' camera often observing from across the room, across the street, across the parking lot.

It's accurate enough to observe that "Somewhere" returns to Coppola's obsession with the way wealth and fame disfigure people, or that it's closely related to her most successful film, "Lost in Translation." (I still think "Marie Antoinette" was an intriguing misfire, but I appreciate the ardent defenses mounted by its admirers -- and am open to reading more.) If anything, "Somewhere" purifies the themes of "Lost in Translation," stripping away most of the sentiment and artifice. Now, it was the sentiment and artifice that gave "Lost in Translation" much of its appeal, so I'm not necessarily claiming this is a better or more lovable film. What it is instead is a fascinating, mature, beautifully crafted work of art, from a director who continues to surprise us. Sofia Coppola has absorbed the Italian avant-garde more completely than her father ever did, and has made a film about celebrity in the vein of Antonioni and Bertolucci, a film about Hollywood in which she turns her back on it, possibly forever.