The lobbyist and the despot 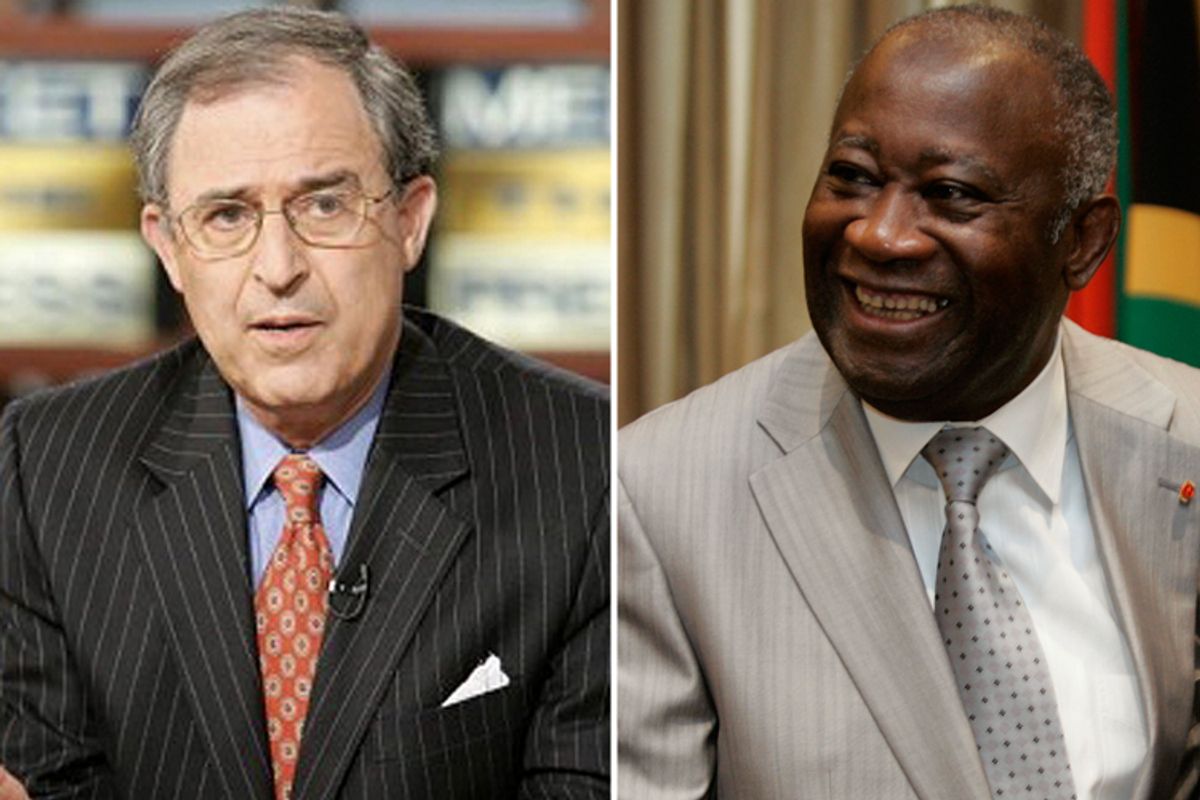 Yesterday Salon brought you the story of Democratic lobbyist and P.R. guru Lanny Davis, who is now representing the Ivory Coast leader Laurent Gbagbo. After losing a presidential election last month, Gbagbo, the incumbent, refused to relinquish power to the internationally recognized winner, Alassane Ouattara. Gbagbo's forces have since been unleashing violence on the opposition and pressuring U.N. peackeepers to get out of the country. (More background here.)

Last night we had a chance to talk to Davis about the situation in Ivory Coast, and why he's comfortable representing a regime that is reported to be committing human rights abuses. Much of the conversation revolved around Davis' contention that the election results should be reviewed by a mediator of some kind. He calls himself "agnostic" on the results, even as the entire international community -- including the United Nations, the European Union, the African Union and the United States -- recognizes Ouattara as the winner. Though he is a paid advocate of the Gbagbo regime, Davis casts himself as a force for peace and transparency in the situation.

The most interesting part of the conversation centered on human rights. These questions are not new for Davis; he has recently worked in support of the Honduran coup government and for the brutal dictator of Equatorial Guinea. (For the latter job, he is being paid $1 million for a year's work.)

Before you read a partial transcript of the conversation, a bit of context: According to various media reports, Gbagbo or forces loyal to him have blocked food and medical supplies from getting to U.N. peacekeepers who are guarding the hotel where Ouattara is holed up; ordered those same peacekeepers out of the country; killed unarmed opposition protesters; and conducted nighttime raids in neighborhoods supportive of Ouattara. There are now fears of a civil war between the two sides, and the U.S. has imposed sanctions on Gbagbo and his allies.

Here is a partial transcript, with minor edits for clarity:

CNN quoted you as saying, "Mr. Gbagbo opposes violence and has authorized me to say he wants a mutual renunciation of violence." In the past few days there have been widespread reports of military police literally killing dozens of marchers; that just doesn't square with what you said.

If that's true, then Mr. Gbagbo is lying. But do you know whether Ouattara’s forces are firing first? I don't. Do you?

I don't see how it's a question of "if." I'm reading the most respected media outlets in the world, the New York Times, the Christian Science Monitor; they're all reporting the same thing -- violence, overwhelmingly from one side.

The United Nations high commissioner for human rights is talking about "massive violations" of human rights by the government this week. That's where I'm getting it.

So I guess the key question is, do you have any qualms about having a paid client who, according to all of these widespread press reports, is dispatching military and police who are killing unarmed opposition protesters.

If that's true, I would absolutely not be comfortable. I'd like to know if it's true. ...

Is there a point at which you drop the account? Are you saying that you don't believe these widespread press accounts about what the government is doing -- violent suppression of opposition protests? I haven't seen evidence that they're not credible. This is in the New York Times, Christian Science Monitor, the AP -- I just haven't seen anyone dispute it in any substantive way.

I would certainly not continue if I had evidence of intentional killing by the military of civilians. If they're returning fire -- and I don't know where the reports are coming from, whether they're firsthand reports or whether they're based upon sources that are secondhand.

So right now, I would be very concerned and I would not continue on the account if the government has the military intentionally killing civilians.

So is this something that you're looking into?

I'm wondering whether the people who are saying Ouattara should be president are taking the same position. There's a videotape of a woman who is raped and killed by people identified as Ouattara forces on election day. Are people investigating that? Are they defending that?

I would hope not.

I sort of like knowing that I could always stop this if I am not getting anywhere. But it looks like up to now I've had some constructive effect -- let's put it that way. In the speech that I just read that he [Gbagbo] gave tonight, there's at least movement in the direction that I've recommended. If I found that he's been guilty of, or his government has been guilty of, human rights abuses or killing innocent civilians, no, I would not continue.

After our converstaion, Davis e-mailed along this follow-up quote: "If my role urging transparency, non-violence and dialogue saves a single life by helping Mr. Gbagbo see a peaceful pathway to finding a resolution, then I will feel I made a contribution."