Why we started an all-men's book club 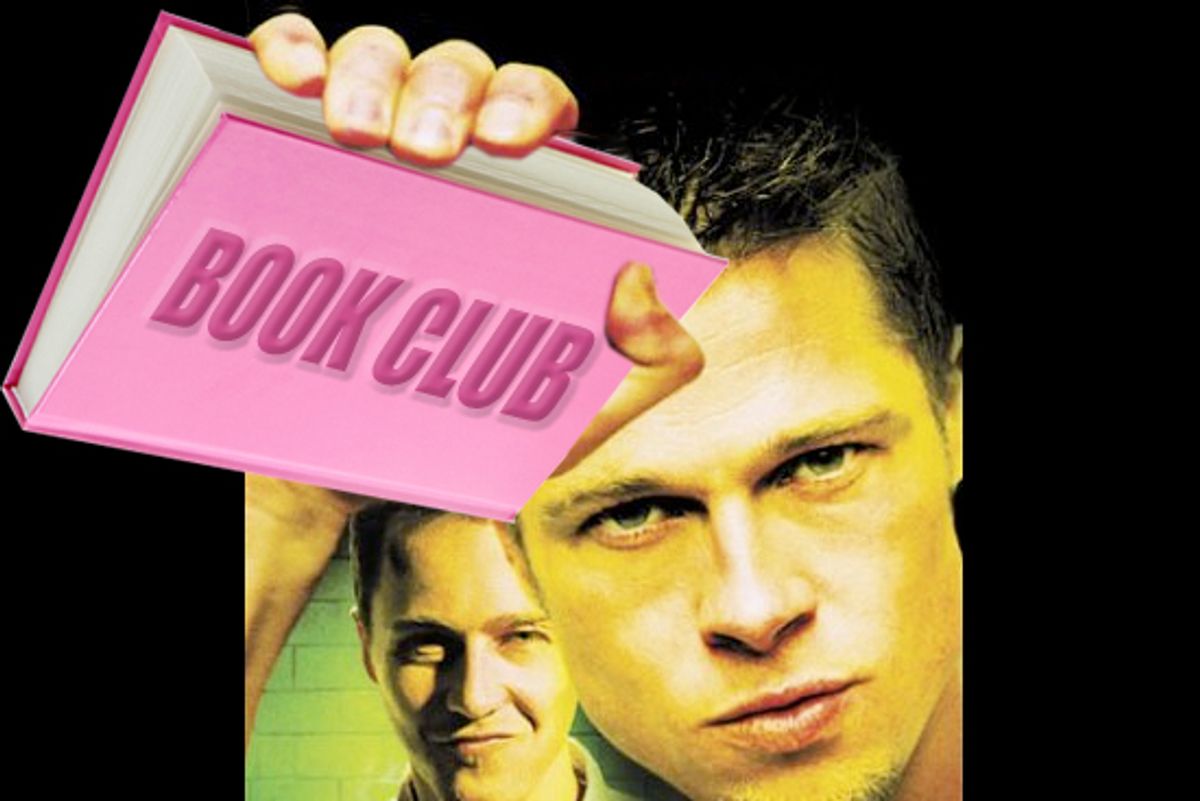 It started as a rival to our wives' book club. Kind of like, Hey, we read, too! Just cause we're guys doesn't mean we don't read (sometimes).

Actually, it was both. Something like, Hey, we're middle­-aged married guys with kids and we have no legitimate reason to hang out.

Think about it. Sports? Not when you can TiVo the game. No reason you have to watch live with the boys. Go drinking? Somehow it's OK for moms to have their wine nights. But try getting dispensation for a weekly bender with your fellow dads. Never happen. At a certain point, your typical Family Guy stops seeking out the Company of Men ‐‐ and all his references are Netflixed. We don't get out much. We turn hermit, unless thrust together by forces beyond our control. Like our wives.

"Do you enjoy the friends your wife has picked out for you?" a buddy asked when we moved to L.A. a couple of years ago. Matter of fact I do. But there's only so much quality bro time you can squeeze in at a 5‐year‐old's birthday party. The other thing you don't have time for anymore is reading. Sorry, that copy of "The Onion's Finest News Reporting" in the can doesn't count.

It was to fill all those voids that my friend Hank started a guys' book club. A successful TV writer‐producer, he rounded up half a dozen cronies -- a couple of writers he'd worked with, a line producer, a film editor and me. I didn't know him that well, but I'd actually written a book. I guess that put me in the book‐y guy category. Plus I loved the idea. My father, who was born in Spain, imported to his adoptive Canada a tradition called the "tertulia." Every month, he'd have lunch or dinner with a group of expat Spaniards to discuss politics, literature, bullfighting. In Spain they do it at the men's club. Every city or town has one. In Toronto, where I grew up, it'd be at some Spanish restaurant. Hank's book club was my chance to replicate some of my dad's Old World machismo.

All of us were married with kids. Or just married. Or engaged. No single guys. They can see their buddies any time they want and talk about sexting, or whatever single guys do. They didn't need this. We did.

The first official selection was "Falling Man," by Don DeLillo. No Jane Austen for us. You want dark? You want to read about a dude dealing with 9/11? Bring it. This was going to be the Axe Body Spray of book clubs.

Hank hosted at his place -- a modernist temple to his bachelor success that was in the process of being neutered by his lovely new bride. The leather-per-square-foot ratio was being drastically reduced. The dominance of the 60‐inch flat screen was in question.

We showed up around 7 p.m., with our dog‐eared "Falling Men." We'd done the reading. A couple of overachievers whipped out reviews from the New York Times or, for extra credit, TLS. (That's the Times Literary Supplement to you.)

Our plates piled high with pasta and chicken parm ordered in from some West Side eatery, we sat around Hank's dining table quoting two passages we'd underlined and tried to make clever observations. How "Falling Man" is a "novel of ideas," as opposed to "a novel of interesting plot" or "a novel of realistic dialogue." We agreed that Don DeLillo is a great writer, but kind of boring.

It was definitely awkward, like sharing emotions or something. When was the last time any of us talked about literature after college? That's a muscle we stopped using a long time ago. Like our abs.

After dinner, we bused our plates and retired to the living room. Having maxed out on literary badinage ‐‐ because guys in book clubs use a lot of fancy French words – we sat in manly silence. Now what?

That's when one of the guys whipped out his iPhone and YouTubed a video of Kermit the Frog reacting to "Two Girls, One Cup." Huddled around the 3‐inch screen, we were in familiar male‐bonding territory now. Boys being boys. The adult equivalent of my preschoolers' endless appetite for poop‐based humor.

The club had found its rhythm. A solid 45 minutes of highbrow banter, then ... an anecdote about a hot Israeli coed, or a long‐lost girlfriend who'd just poked one of the guys on Facebook, angling for an affair ‐‐ something one of the devoted husbands in the room might fantasize about but would never actually have. These nights were an excuse to escape our wives, but we were happy to get back to them. In direct violation of the First Rule of Book Club, I did indeed "talk about book club" with mine. She was jealous. Her book club talks about babies. And cracked nipples.

Over the next few months, we read "Saturday," "Never Let Me Go," "The Russian Debutante's Handbook," "Lush Life," "Immortality." And by "read," I mean about three of us finished -- or at least started -- the book. The venues and menus rotated. Rice and beans for Junot Diaz. Pints of Guinness to wash down J.P. Donleavy. As the group matured, serious discussion supplanted sex talk. God, quantum mechanics, divorce. It was like our own personal Charlie Rose. Or Oprah.

Then the New Yorker thing happened.

The New Yorker online has a blog called Book Club Confidential. They got wind of us and wanted to profile one of our gatherings. Exciting! We were going to be in the New Yorker! (Online. But still.) Two weeks later, the piece was up. Headline: "The Literate Lads of La‐La Land." Huh. OK, kinda fruity. Maybe it'd get better from there? But no: One of our members is described as a "producer of television commercials segueing to yoga instructor." In the accompanying photo, Bill -- the film editor ‐‐ and I are wearing potholders and carrying casseroles. What were we reading that month? A novel called "Bel Canto." By Ann Patchett. Might as well have been Jane Austen.

All of which might not have been quite so humiliating if, a few weeks later, the New Yorker hadn't blogged about another male book group. This one calls itself the Scorpions ‐‐ an "all hard‐guy club" in Boston's North End. Their motto: "We read. We bleed. And we kick ass." Their photo has a guy shooting an automatic weapon out of an airplane. Of course, they're reading Hemingway.

Bill circulated the blog post about the "Scorps" with an e-mail subject line, "Guys, we've got to stop talking about relationships."

My fantasy of rekindling the old bromantic mojo was dead. We were a bunch of middle‐aged dads reading about opera and cooking for each other. Worse: We'd started to talk about our kids. I could almost feel my nipples cracking. I considered quitting. Once or twice I didn't show. I made up excuses because the book seemed too boring. Or I lucked out and was out of town. Then someone suggested the Andre Agassi memoir, "Open." Great story, brilliantly ghosted by "Tender Bar" author J.R. Moehringer, about a sport I love. I couldn't quit on that.

So we're back at Hank's house, watching the Australian Open ‐‐ TiVo'd on his 60‐inch flat screen, now banished to the den, and discussing the Agassi book over, yes, brunch. No surfing for iPorn. No X‐rated strolls down memory lane. Hank's wife brings in their baby boy and the little guy hangs with us for a while, bouncing on our knees and enjoying the company of men. I sink back into the leather couch and, finally, relax. I'd found my father's tertulia. I could now say, Hey, we're middle­-aged married guys and we actually do have a legitimate reason to hang out.

I volunteered to host the next one. "Three Balconies," by Bruce Jay Friedman, man's man of letters -- but with irony. The jacket copy reads: "In sumptuously simple language -- the language of the street, the bar, the office -- Friedman gives us a collection of moral fables that explores friendship, faith and failure unswervingly, yet with compassion and, as always, tremendous humor."

Suck on that, Scorpions. I already know what I'm going to cook.