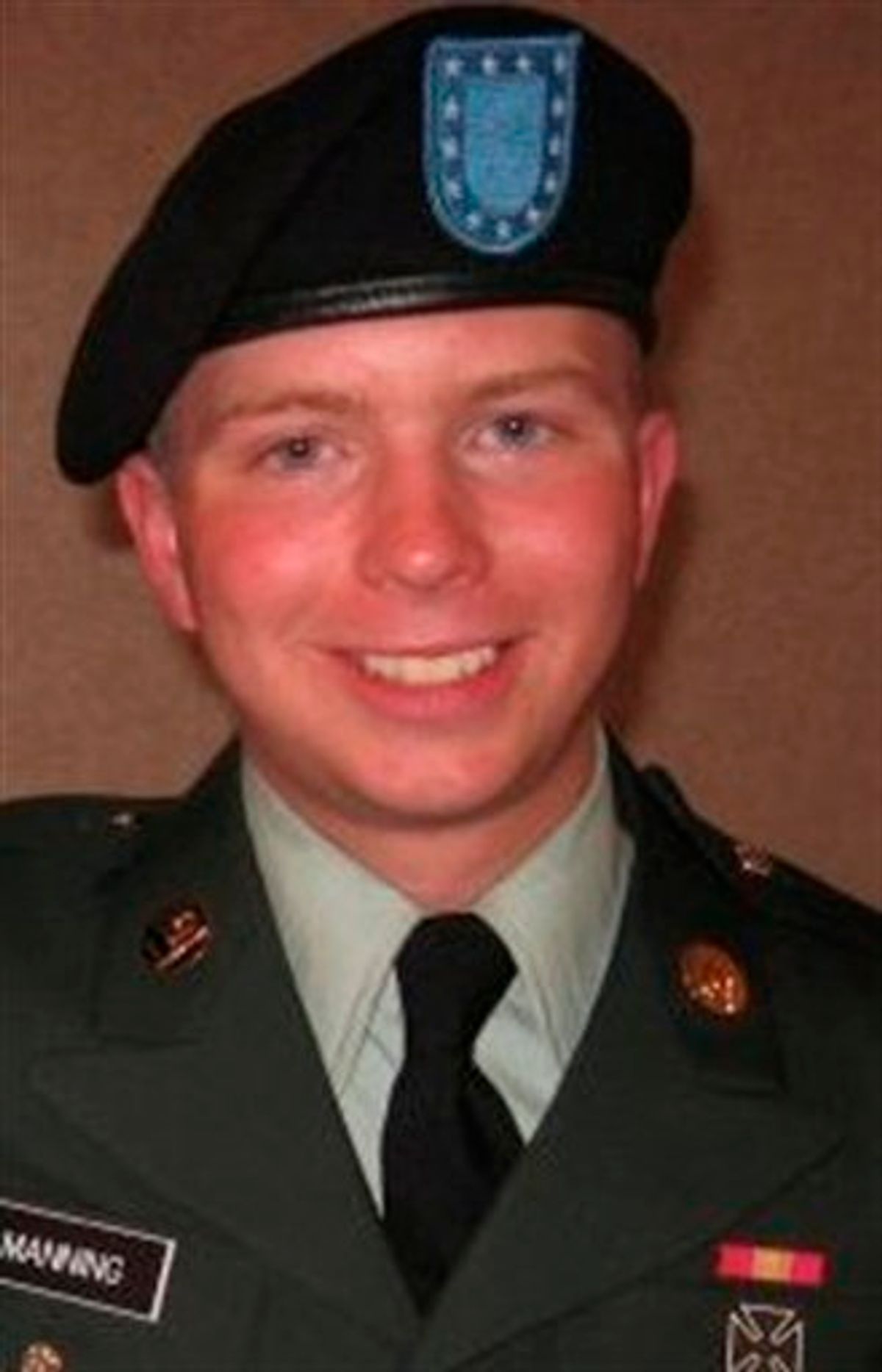 FILE - This undated file photo obtained by The Associated Press shows U.S. Army Pfc.Bradley Manning. The Obama administration has told whistleblower WikiLeaks that its expected imminent release of classified State Department cables will put "countless" lives at risk, threaten global counterterrorism operations and jeopardize U.S. relations with its allies. The U.S. says it has known for some time that WikiLeaks held the diplomatic cables. No one has been charged with passing them to the website, but suspicion focuses on U.S. Army Pfc. Bradley Manning. (AP Photo, File) (AP)
--

Both The Guardian and the Associated Press are reporting that the U.N.'s top official in charge of torture is now formally investigating the conditions under which the U.S. is detaining accused WikiLeaks leaker Bradley Manning.  Last week, I described the inhumane terms of his detention at a Marine brig in Quantico, Virginia, including being held 23 out of 24 hours a day in solitary confinement for seven straight months and counting as well as other punitive measures (such as strict prohibitions on any exercise inside his cell and the petty denial of pillows and sheets).  Manning's lawyer, former U.S. Army Major and Iraq War veteran David Coombs, thereafter publicly confirmed those facts, and then announced two days ago that efforts to persuade brig officials to allow more human conditions have failed, meaning it is likely that Manning will languish under these repressive restraints for many more months to come, at least.

In addition to confirming the facts I reported, Maj. Coombs added several disturbing new ones, including the paltry, isolated terms of Manning's one-hour-a-day so-called "exercise" time (he's "taken to an empty room and only allowed to walk," "normally just walks figure eights in the room," "if he indicates that he no long feels like walking, he is immediately returned to his cell"); the bizarre requirement that, despite not being on suicide watch, Manning respond to guards all day, every day, by saying "yes" every 5 minutes (even though guards cannot and "do not engage in conversation with" him); and various sleep-disruptive measures (he is barred from sleeping at any time from 5:00 am - 8:00 pm, and, during the night, "if the guards cannot see PFC Manning clearly, because he has a blanket over his head or is curled up towards the wall, they will wake him").

Although prolonged solitary confinement can unquestionably constitute torture (the surgeon and journalist Atul Gawande made the definitive, undeniable case for that last year in The New Yorker), I wasn't prepared to state based on what I could confirm that the treatment of Manning met the legal definition of torture (though it is clearly inhumane and certain to produce long-term psychological damage).  That was because Manning wasn't subjected to the full-on sensory deprivation used at America's SuperMax prisons (his lawyer said "he can occasionally hear other inmates talk," though he cannot now) and did get the minimally required one hour a day of "exercise."  But others have made the argument persuasively that this is torture.

Ralph Lopez chided me for my equivocation on that question, assembling ample evidence to support his view that the treatment amounts to torture.  Digby made a strong case that "locking up someone who has not presented any kind of threat to other prisoners and who has not been convicted of a crime for months on end in solitary confinement under tight restrictions is torture."  The psychologist and torture specialist Jeffrey Kaye made the same argument.  The Atlantic's Ta-Nehisi Coates wrote:  "I don't really see any argument for keeping Manning in these conditions, except a punitive one."  And in the wake of my report, there have been several reports of the damage to Manning that is now apparent, including in The Guardian ("Bradley Manning's health deteriorating in jail, supporters say"), The Independent (Manning "in weak health and wracked with anxiety"), The Daily Beast ("The conditions under which Bradley Manning is being held would traumatize anyone"), and from his lawyer ("who says the extended isolation -- now more than seven months of solitary confinement -- is weighing on his client’s psyche . . . . His treatment is harsh, punitive and taking its toll, says Coombs").

The U.S. is one of the world's most prolific practitioners of prolonged solitary confinement: unsurprising given that it enjoys the distinction of being the world's largest Prison State and the Western world's most merciless one.  As NPR noted in 2006, there are roughly 25,000 prisoners in the U.S. kept in those conditions.  But the vast, vast majority of them -- unlike Manning -- have actually been convicted of crimes.  It is very rare (though, when it comes to Muslims accused of Terrorism, by no means unheard of) for these conditions to be imposed on people who have yet to be convicted of anything and never posed any threat to prison security.  Prolonged solitary confinement is inhumane, horrendous and gratuitous even when applied to those convicted of heinous crimes, but the fact that it's being done to Manning here in order to "persuade" him to offer incriminating statements against WikiLeaks and Julian Asange makes it particularly repellent.

What's been most striking to me since I wrote that Manning article has been how the debate over detainee abuse has "evolved" -- and not evolved -- from the Bush years.  Back then, Bush defenders were completely incapable of separating their opinions of the detainees from the question of whether the treatment was abusive and inhumane (these are Terrorists, so who cares what is done to them?).  That has been the primary response to those defending the government's treatment of Manning as well (he's a Traitor!!) -- except now, of course, it's found among many progressives:  note how identical is the response from this front page writer of the liberal blog Crooks & Liars ("the meme o the day seems to be on Manning’s so-called torture, to which I say ‘boo hoo'") to that of The Weekly Standard ("Don't Cry for Bradley Manning") and RedState ("Give Bradley Manning His Pillow and Blankie Back").  This convergence is a perfect microcosm for how much our political discourse over such matters has transformed since January 20, 2009.  At The Atlantic, Coates asked:

I think the worse part, is that very few people care what kind of conditions the incarcerated endure. We have essentially accepted prison-rape. The New Yorker piece asks is solitary confinement torture? I'd ask, even if it is torture, whether we even care?

Three years ago, many people who are conspicuously silent now loudly and continuously claimed they did care.  Indeed, prolonged solitary confinement was one of the worst aspects of detention at Guantanamo, as many civil rights groups highlighted, but the type of glib and dismissive responses to such concerns back then ("'It's kind of like having their own apartment,' Camp 6 Guard, Guantánamo Bay Naval Station") is quite similar to what I've heard from people across the political spectrum in response to my Manning article.

As was true for the debates over War on Terror detainees, one's views of Manning are totally irrelevant to the issue here (that's aside from the fact that he's been convicted of nothing; is not, contrary to many claims, charged with espionage or treason; and what he's alleged to have done has resulted in no deaths).  The only relevant issue is whether -- after reading Gawande's New Yorker article -- you believe that prolonged, 23-hour-a-day pre-trial solitary confinement is acceptable and humane treatment.  It may or may not fall short of actual torture -- it's good that the U.N. will now formally investigate that question -- but either way, it's designed to degrade both Manning's psyche and resistance to incriminating WikiLeaks and is highly likely to achieve both.

(1) In early November, I reported that as part of the government's campaign to harass and intimidate anyone remotely connected to WikiLeaks or Manning, Homeland Security agents -- without any warrant or shred of judicial authority -- seized the laptop, cameras and memory sticks of 23-year-old MIT researcher David House when he returned to the U.S. from a vacation in Mexico.  House's crime appears to have been that he visited Manning several times at the Quantico brig.  Even after seven weeks, DHS refused to return his stolen goods, so the ACLU of Massachusetts demanded early this week on House's behalf that they be returned immediately, and the following day, they were sent back to him.  But Jacob Appelbaum -- the programmer who had his laptop and cellphones seized at the border without a warrant back in July -- still has not had his possessions returned to him by the government.  This outrageous practice -- seizing and storing the electronic communications of American citizens with no charges or even any warrants -- is not confined to WikiLeaks; many legitimate American critics of the government are subjected to this repeatedly when they re-enter the country, and I intend to write much more about this shortly.

(2)  Julian Assange was interviewed yesterday on MSNBC by Cenk Uygur, and his response to Joe Biden's "high-tech terrorist" accusation -- including a discussion of the definition of "terrorism" and to whom it does and does not apply -- is well worth hearing:

(3) A comprehensive and helpful time-line of events relating to Bradley Manning and WikiLeaks has been assembled by FDL here.

UPDATE:  After his last visit to Manning over the weekend, David House has written a comprehensive report of his discussions with Manning, particularly Mannings' statements about the conditions of his detention, many of which directly contradict claims by brig officials.

UPDATE II:  Daphne Eviatar of Human Rights First compiles evidence and interviews experts to document that the treatment of Manning is "not customary."

Earlier today on BBC's Newshour, I debated Manning's detention with former Reagan Pentagon official Jed Babbin, who was also one of the key members of the Bush Pentagon's domestic propaganda program.  He, needless to say, vehemently defended Manning's treatment; the debate was quite acrimonious; and I'll post it as soon as it's available.

For those in Canada:  I'll be on the CBC tonight, on Mark Kelley's Connect, at 8:00 p.m, discussing Manning.

UPDATE III:  Here is the BBC debate about Manning I did earlier today with Babbin.

UPDATE V:  The CBC interview I did last night on Manning is here; it's the first segment of the show.

UPDATE VI:  The inhumane nature of Manning's detention is now generating media attention -- as it should; here is the front page of msnbc.com this morning, with a link to this article: 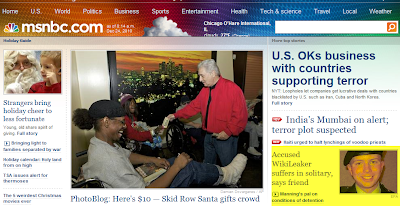