Sofia Coppola: Not just for girls

Interview: The director of "Somewhere" talks about her manly new film and the critical backlash against her work 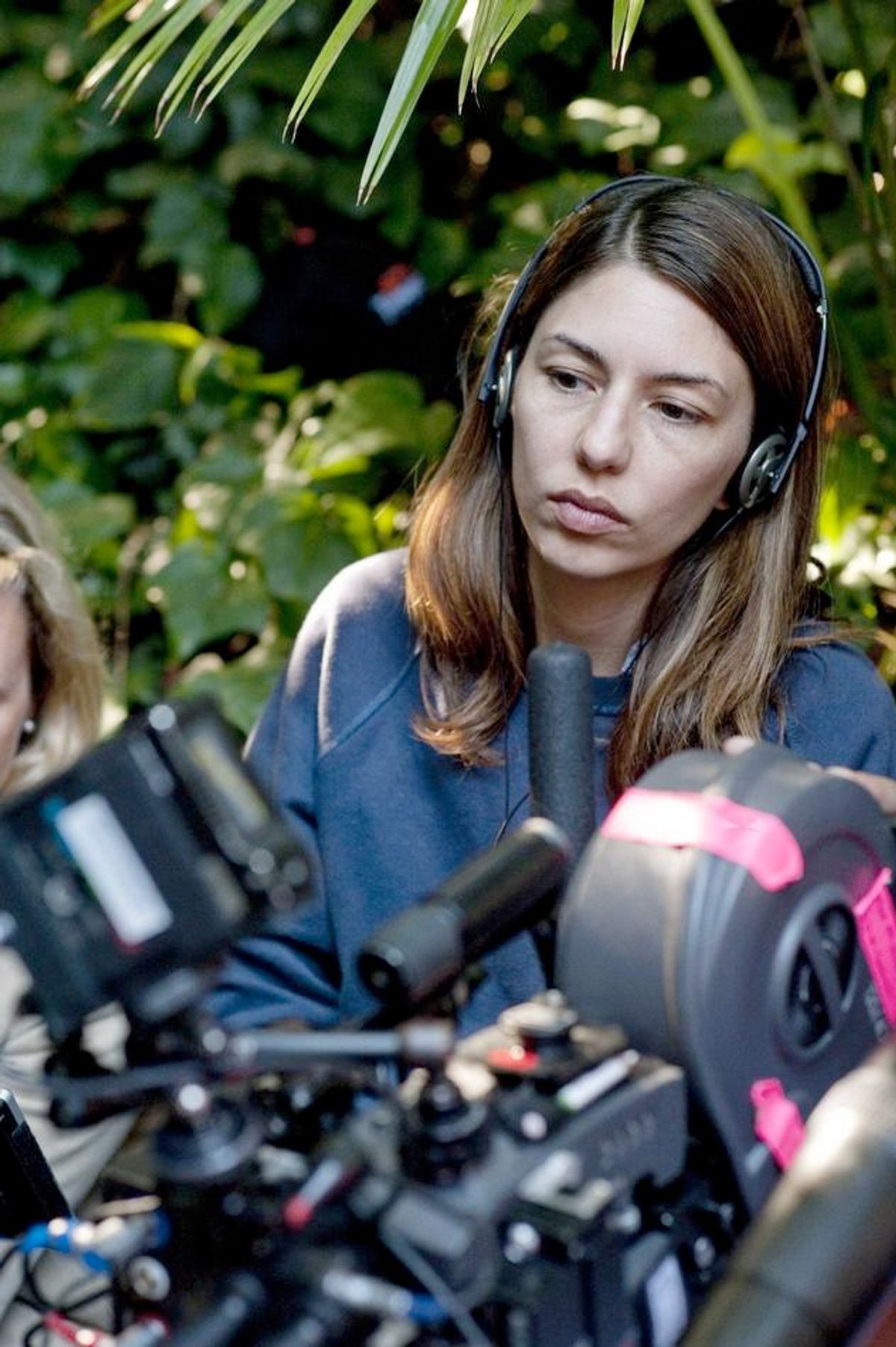 It's fitting that Sofia Coppola's new movie is called "Somewhere," an apt title for a filmmaker whose works are grounded in a sense of place and yet feel as if they're taking place in their own hermetically sealed world. The same qualities that got "Lost in Translation" lauded for its dreamy atmosphere prompted attacks on "Marie Antoinette" for being cosseted and self-indulgent, which had more to do with critics' sympathies toward the former's melancholy May-December romance and their hostility to the feminine frippery of the latter than any profound shift between the two. (Anthony Lane's New Yorker review of "Marie Antoinette" remains one of the most sexist pieces of criticism I've ever read.) A few of the same brickbats have been lobbed at "Somewhere," but in the main the story of divorced action-movie star Johnny Marco (Stephen Dorff) bottoming out at the Chateau Marmont has met with a warmer reception, winning the top prize at the Venice Film Festival.

As he sleepily watches twin strippers gyrate in his hotel room and cops a fake smile for photos with his costar, Johnny comes to terms with the vapidity of showbiz, which pointedly contrasts with the time he passes in the company of his young daughter (Elle Fanning). But while we get the sense that Johnny is headed toward something, for the most part the movie is content to hang with him as he spins his wheels, soaking up the dimly lit decadence of the place celebrities check into when they want to seem "real." In a high-ceilinged conference room with a panoramic view of SoHo, not far from where she lives with her husband, Thomas Mars of the French band Phoenix, and their two children, Coppola reflected on the shift from "Marie's" militant girliness to "Somewhere's" idle masculinity, why the personal roots of her movies aren't where many would think, and the importance of hearing a stripper's hands squeak on the pole.

What was the first piece of "Somewhere" that fell into place for you?

I was living in Paris after "Marie Antoinette." I took a year off and I had a baby. I was thinking about what I wanted to work on next, and a character came to mind, a simple portrait. I wanted to do something from a guy's point of view, after "Marie Antoinette" was so girly, just to shift gears. Just looking at lots of stories, the portrait of an actor, the Chateau Marmont, this character came to mind.

"Marie Antoinette" was almost defiantly girly. What interested you about taking on a male point of view?

It's less familiar, so it was just kind of challenging, intriguing to picture what his experience might be like — the whole thing with his experience being more stripped down and minimal, not in this decorative, girly world. With "Marie Antoinette" I got to really indulge my feminine side. This was a different side of my personality.

Some of the more condescending reviews of "Marie Antoinette" made a facile equation between you and your protagonist, as if you were the flippant queen dousing herself in luxury. Partly that's because you don't stand back from your characters and judge them.

I try to take the point of view of the character, so you're in their world. I try to be empathetic to them, because why would you care about connecting with a character unless you can see things from their point of view. I can see how it's easier to be sympathetic for a less spoiled, privileged person.

People persistently criticize you for making movies about these kinds of privileged characters. Are you ever tempted to change gears and make a movie about a kid boxing his way out of the slums?

I know those worlds. I don't think I'd be able to add something to a kid boxing his way out of the slums, because I don't know that experience. I've been around these worlds. The world [of the Chateau Marmont] is familiar to me. It's not my reality, but I think it relates so much to our fascination today with celebrity culture that it's fascinating to see another side of it.

You open "Somewhere" with a static shot of Stephen Dorff's Ferrari driving in circles around a desert racetrack, which not only sets up his character's personal stasis but keys the audience into the fact that it's not going to be a movie in which a ton of things happen. It's been described as a two-hander between him and his daughter, but a lot of it's about him being alone -- a one-hander.

It's a portrait of him, and then she comes into it for a while and it turns into a kind of buddy thing. What I set out to do is a portrait of this guy at this moment in his life, and right at the beginning I wanted to set up so you know where he's at and what kind of guy he is.

When did the daughter come into the story? Was she there from the outset?

You had your second child in May, and the movie premiered in September. Was it mostly done by then?

It was editing, so I finished the movie and then took time off. But I had taken time off when I had my daughter, and I was in that world with her, spending a lot of time at the park with the baby, so I was thinking about that, and trying when I was writing to put in what was in my mind, what was personal to me.

You're talking about taking time off for your kids, but Dorff's character doesn't do that at all. He takes his daughter with him on a business trip to Italy, but it seems as if his career has largely kept them apart.

I feel like he became famous a couple years ago and kind of got caught up in all that and is out of balance, and spending time with her reminds him of parts of his life, or himself.

People have called the movie semi-autobiographical, which seems to be pushing it.

Just because he's a father and I have a father it's autobiographical. I don't really get that. Someone else said, "In your father's films, they eat food. In your films they eat food." I was like, "Are you serious?" It's definitely personal. I put personal memories and experiences of trips with him in the movie. But my childhood was so different.

The Chateau Marmont in "Somewhere," the hotel in "Lost in Translation," Versailles in "Marie Antoinette," even the cloistered suburban world of "The Virgin Suicides" -- it seems as if a sense of place is key to the way you conceive your movies.

It's one of the starting points. I usually start with a character and then the place follows soon after, but with "Lost in Translation" I started with wanting to do something in Tokyo. I think that's always a big aspect of it. I wanted to feel like when you go to a movie that you're in this other place for two hours. It's part of creating the atmosphere.

What was the calculation as far as how much plot to add? The atmosphere is so lovely and so precisely drawn you almost don't want anything to happen.

I don't know. It was just feeling my way through it intuitively, trying to balance this mundane aspect of being with this guy, but also have enough happen that you're still engaged.

Was that balance there at the script stage, or was it something you found in editing?

When I went back and looked at the script afterward, it's pretty much like the movie, where usually I move things around in editing more. This one was pretty close. Except for the Chris Pontius Guitar Hero stuff -- that was improvised.

The movie is so attentive to detail. I love the scenes where Dorff has the twin strippers come into his room and you hear the squeak of their hands as they pole dance. So often when movies go into strip clubs, it feels like an excuse for some gratuitous T & A, but you don't present it as that kind of fantasy world. How did you decide to present the scene that way?

I thought about the whole thing of wanting to show it not like in a movie, but more naturalistic. In reality, they'd have to install these poles, and there'd be the squeaks, all the things that make it more like real life. I like that they're not perfect and slick, they're awkward and cute. I always like those real-life details, those little moments that you find funny or touching. I try always to avoid movie-like things.

You grew up in and around moviemaking. Is wanting to push away from things being "movie-like" a reaction to that?

I feel like it's more from watching movies. You see things a lot, the things that are more generally in movies. A lot of movies recently just bombard you with the soundtrack, song after song, so in reaction to that I wanted to see how sparse we could be with the music and use it intentionally. I like trying to show the side of life where you can't express yourself. In movies, they say all their feelings, but I think in life you're not always able to communicate what you're feeling, or you think of it after it's too late. I try to put in the things I notice from life, and avoid movie clichés.