The year in trumped-up pseudo-scandals

2010 was full of crescents in logos, candidate bribery and dastardly reverse-racism 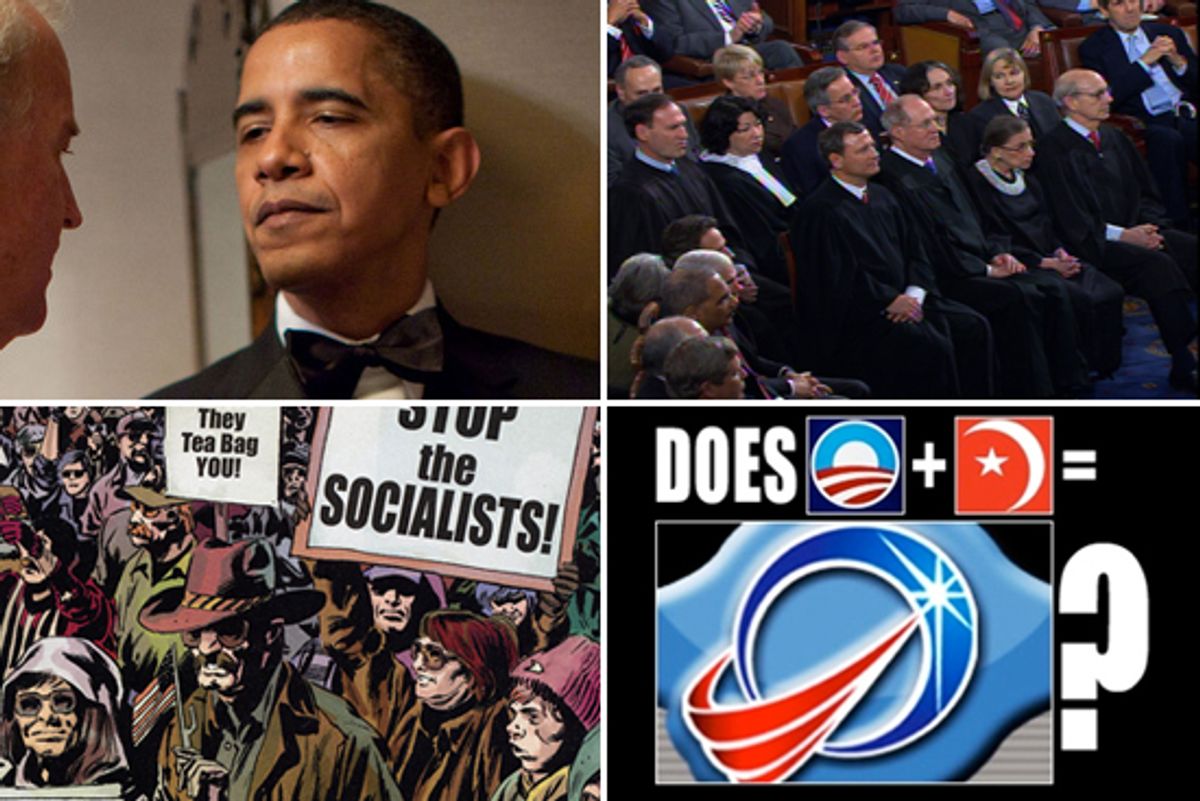 Every day, right-wing blogs and Fox News are abuzz with hysterical reports of partly or wholly invented scandals that, in their fevered imaginations, threaten to once-and-for-all destroy the Obama administration. While most of the bloggers are true believers, convinced that they're one smoking gun away from opening everyone's eyes to the criminality of the administration, on Fox they just run with whatever sounds good until they get bored with it or something more entertaining comes along. Once a pseudo-scandal ceases to be useful, it doesn't really go away forever -- Free Republic commenters will reference it until the end of time -- but most people just sort of forget about it shortly after Megyn Kelly stops mentioning it.

So I went through the archives to help remind everyone just how many silly things the conservative press got all worked up about in the year 2010. (With a couple big items left out. Everyone stopped talking about the "Ground Zero Mosque" once summer ended, but it's hardly been completely forgotten.)

"Game Change," a lengthy catalog of unimportant gossip masquerading as an account of the 2008 elections, was released to much media attention in January. While some people gravitated to the chapters about Sarah Palin or the ambitious power-crazed and insane Elizabeth Edwards, the right-wing media latched onto one silly line spoken by Democratic Senate Majority Leader Harry Reid.

In a private conversation, Reid said Barack Obama was "light-skinned" and had no "Negro dialect." As I said, at the time, a 70-year-old white man saying "Negro" is embarrassing but not particularly shocking or outrageous. Any restatement of Reid's point in more sensitive language -- that Barack Obama could be president because he seems less "black"/threatening to old white people than major black politicians of the past -- would've been mostly uncontroversial.

But Republicans have some major issues and hangups with regard to racial issues -- they've convinced themselves that they're a persecuted minority, basically -- and so they all thought that because Trent Lott got in trouble for saying something awful a few years ago, it was only fair that Harry Reid get in trouble for saying something that they convinced themselves was just as bad, or worse. But Reid used inartful language to express a non-offensive point. Lott used perfectly polite language to express an awful argument: That America would've been better off with a segregationist president.

John Kyl and Michael Steele and John Cornyn -- three Republicans who stood by Lott in 2002 -- called on Reid to resign. He didn't, and everyone more or less forgot about it.

Glenn "Instapundit" Reynolds just innocently posted a picture from the White House Flickr feed, and asked his readers to "analyze the body language." The point was clear: Obama looked smug and uppity. In case you didn't get it, Glenn zoomed in on Obama's face and cropped the photo to show his elitist eyes more clearly, and then quoted some reader mail: "If I really wanted to set my dad off, all I’d have to do is send him this photo."

When Andrew Sullivan pointed out that Glenn was reading something bizarre into a random photo, Glenn proudly bragged that he goaded the liberals into playing the race card, which was, I assume, his goal all along.

Once Bill O'Reilly's done flirting with Megyn Kelly in the clip above, they both take turns purposefully misinterpreting Barack Obama's criticism of the Citizens United decision at the State of the Union, then Megyn calls the act of criticizing the Supreme Court in the State of the Union "unprecedented." Can you believe the nerve of this president, saying something critical of the Supreme Court while they're sitting right there? Unprecedented! In fact, according to Megyn's research, this had only already happened nine other times. But those other times weren't that serious, while this was "a full-frontal assault on the justices who were sitting a stone's throw away from him," apparently.

In February, a panel in a Captain America comic book featured a bunch of protesters with Tea Party-inspired signs, and this really pissed off a bunch of tea partiers. They even investigated the comic's author's Twitter, where they discovered damning evidence that he was a a liberal. My favorite response: "This seemingly innocuous Captain America comic is, in reality, a grossly effective weapon of the leftists, for it captures the hearts and minds of children.

The Defense Department's missile-developing agency got a new logo in February, and critics (Drudge) were quick to point out that it had a crescent-ish shape in it, and crescents are also present on Islamic flags, and therefore Barack Obama loves Iran.

Two short months later, Pamela Geller and the New York Post and Fox News all noticed that the president's Nuclear Security Summit logo also had a mysterious circular crescent-ish shape, just like the shapes on the flags of Muslim countries. (This logo was actually based on the Bohr model of the atom, but Niels Bohr was Danish and therefore probably a socialist.)

NASA is abandoning space to coddle Muslims instead!

In an interview with al-Jazeera, NASA Administrator Charles Bolden said that Barack Obama charged him with inspiring children to get into math and science, expanding international relationships and reaching out to the Muslim world.

This is all fairly uncontroversial stuff, but conservatives exploded with outrage. It's NASA's job to send Americans into space to conquer the moon-men, not to encourage Islamofascists!

Barack Obama told Republicans to sit in the back of the car, which is reverse-racist

Everyone got sick of the president's car-in-the-ditch routine before the midterms, but apparently telling Republicans to sit in the backseat of a car was an endorsement of racial segregation, according to Fox & Friends and Glenn Beck and Michele Bachmann.

As we all know, the best way to combat terrorism is to constantly talk about terrorism, all the time. But Barack Obama is scared to say the word terrorism, because he is a Kenyan socialist. Monica Crowley did some fine work popularizing this bizarre talking point, which of course became a Fox News recurring theme for a good month or so. Even Jim DeMint said Obama was unwilling to use the word "terrorism."

Obama, for the record, says the word "terrorism" pretty often.

After some prompting from Matt Lauer, Barack Obama said he was talking to people dealing with the Gulf oil spill so that he could learn "whose ass to kick." Apparently, this sullied the office of the presidency. (Among other things.)

In August, First Lady Michelle Obama took a vacation to Spain, with a couple friends and her daughter Sasha. Matt Drudge claimed that this trip would cost the taxpayers millions of dollars and Mickey Kaus said this proved that the first family was fighting and Maureen Dowd just said something that made no sense about Michelle bringing Barack martinis after work. (The friends paid for their own airfare and lodging, for the record.)

According to Democratic Senate candidate Joe Sestak, the White House offered him a job in exchange for not running against Arlen Specter. (Actually, Bill Clinton mentioned some sort of unpaid role doing something terribly uninteresting. But the truth doesn't matter.) While the White House said this never happened, the right-wing press decided that this was a terrible bribe and a violation of various laws. Rep. Darrell Issa got particularly excited, asking for a special prosecutor to be appointed. Then Sestak lost and no one cared anymore.

Someone at the White House apparently offered Colorado House Speaker Andrew Romanoff some sort of job in exchange for dropping out of the Senate primary. Dick Morris got all excited. But then Romanoff lost and no one cared anymore.

The White House forced Eric Massa to resign because of healthcare

Former Representative Eric Massa is, plainly, a weird, troubled guy. He was forced to resign in March because of complaints that he inappropriately touched staffers and generally created an uncomfortable work environment. But according to Massa, he was forced out because of White House dirty tricks and union thuggery. Rahm Emanuel confronted him naked in the shower and unions tried to bribe him into supporting the administration's agenda! In Massa's telling, his ouster was punishment for voting against cap and trade and healthcare reform.

Glenn Beck believed every word of this nonsense for like a day, until he had Massa on for what was perhaps the most entertaining hour of the Glenn Beck show ever.

Barack Obama's trip to India will cost $200 million a day!

This one's only a little more than a month old, but it had a short shelf-life because the sourcing was even dumber than usual for these sorts of things. One Indian news agency quoted an anonymous "top official" of an Indian state claiming that Obama, accompanied by 3,000 people, would spend $200 million a day during his trip to Mumbai. Rush Limbaugh, Drudge, the National Review, the Washington Times, the Daily Mail and every conservative blog under the sun ran with this incredibly dubious "report." Then everyone shut up about it minutes after it was debunked and stopped being a useful attack.