"It's a Wonderful Life": The most terrifying movie ever

Underneath the warm fuzzies, Frank Capra's holiday classic is a tale of hunger, greed and a troubled America 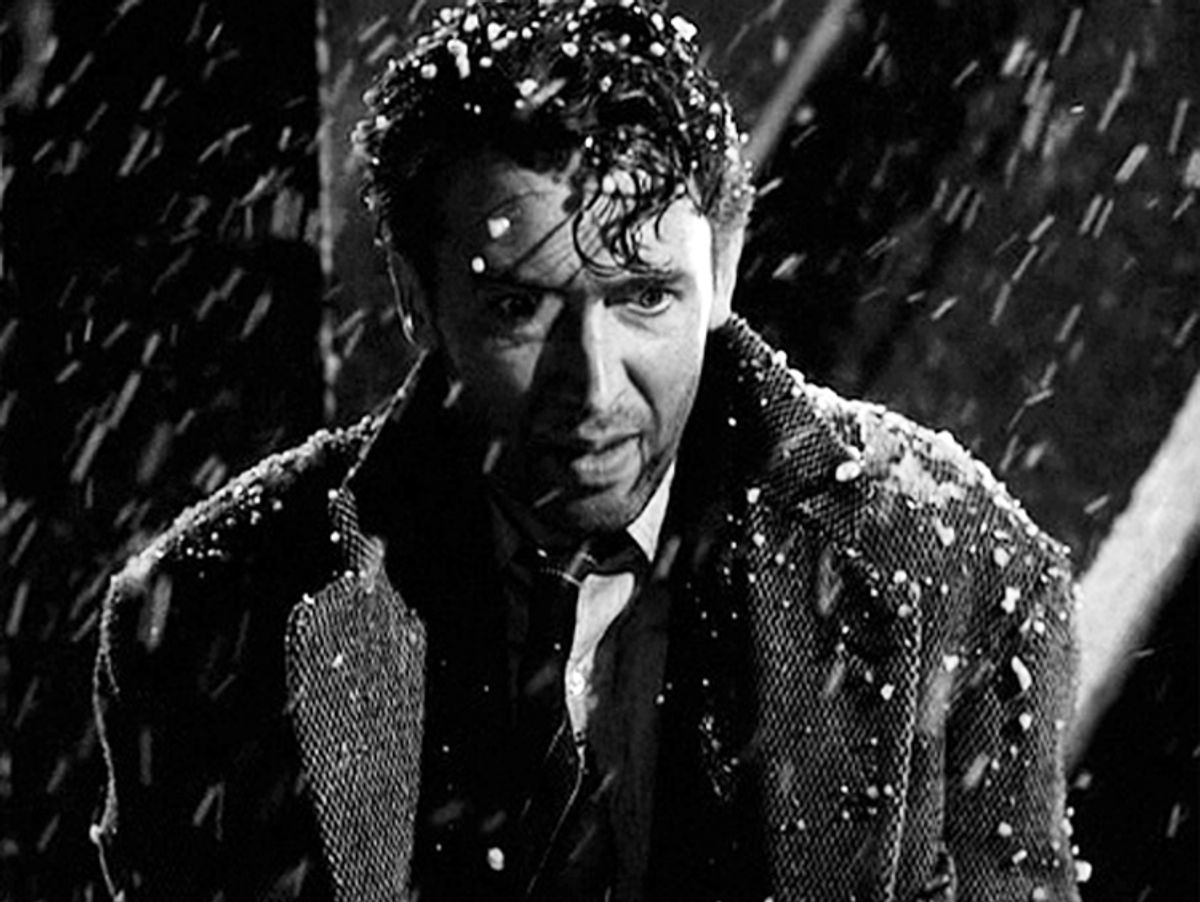 Jimmy Stewart in "It's a Wonderful Life"
--

I don't care what your parents told you. "It's a Wonderful Life," that reassuring holiday spectacle, is really the most terrifying Hollywood film ever made. It's one of a handful of masterpieces directed by Frank Capra, an Italian immigrant who loved America because America saved him. Capra lived through the Depression, then through the rise of terrible ideologies. He knew how bad things could get. He knew, too, that the United States was not immune and this knowledge spiked his love with the worst kind of fear. The result was that special melancholy, blue shot through with black, that runs through his films, the best of which are parables that operate on various levels, some of which were probably unknown to Capra himself.

If you were to cut "It's a Wonderful Life" by 20 minutes, its true subject would be revealed: In this shortened version, George Bailey, played by a Jimmy Stewart forever on the edge of hysteria, after being betrayed by nearly everyone in his life, after being broken on the wheel of capitalism, flees to the outskirts of town, Bedford Falls, N.Y., where he leaps off a bridge with thoughts of suicide.

Oh no, you might say, you've missed the entire point. Following the trials of George Bailey without seeing his rescue is like hearing the story of the Passion without knowing of the Resurrection. It's just Jesus on the cross saying, "Oh, Father, why hast Thou forsaken me," followed by a star wipe and end credits. It's the power of editing. Where you start and where you finish is the whole story. That's all modern literature is: the identical image cropped. It's the same with the narrative experienced by everyone every day. The story is reframed for taste. On this channel, Barack Obama fails and is condemned. On that channel, Barack Obama stumbles but is resurrected in the way of George Bailey. Did the Chicago Bears lose? Well, then let's find the channel on which the Chicago Bears win.

In other words, I did not miss the point. The story of the George Bailey who is honored and saved remains. It's the explicit message of the final scene: A man with friends is never poor. But another, deeper message is there, too -- it's Capra wailing at that secret register picked up by bats and dogs, saying, "Help, help, America is in trouble!"

"It's a Wonderful Life" is about hunger. It's about greed. It's about the many ways a good man is stymied. Finally, it's about George Bailey, whose decency prevents him even from killing himself. Though he wants to jump, he dives into the river to save another suicide, instead -- the angel, it turns out, who has come to show George that his life has been wonderful after all, because human commerce is a web and as part of that web George has affected and saved thousands of people. To make this point, the angel famously shows George what the world would be like had he never been born, leading him back into town, which had been Bedford Falls but is now named after the treacherous banker who controls it: Pottersville.

Bedford Falls was quaint and fine; Pottersville is vulgar and mean.

In this new world, George Bailey's wife is a spinster. His brother is dead. His house is a ruin.

He runs home, where friends and relatives have gathered to save him.

Here's my point: I do not think the hidden message vanishes when the movie goes Hollywood and happy. I believe the resolution of the darker movie is, in fact, still there, wrapped around the happy ending of the classic. Look again at the closing frames -- shots of Jimmy Stewart staring at his friends. In most, he's joyful. But in a few, he's terrified. As I said, this is a terrifying movie. An hour earlier George was ready to kill himself. He has now returned from a death experience. He was among the unborn, had crossed over like Dante's hero, had seen this world from beyond the veil. In those frames -- "The Night Journey of George Bailey" -- I don't think he's seeing the world that would exist had he never been born. I think he's seeing the world as it does exist, in his time and also in our own.

George had been living in Pottersville all along. He just didn't know it. Because he was seeing the world through his eyes -- not as it was, but as he was: honest and fair. But on "The Night Journey," George is nothing and nobody. When the angel took him out of his life, he took him out of his consciousness, out from behind his eyes. It was only then that he saw America. Bedford Falls was the fantasy. Pottersville is where we live. If you don't believe me, examine the dystopia of the Capra movie -- the nighttime world of neon bars and drunks and showgirl floozies. Does Bedford Falls feel more like the place you live, or does Pottersville? I live in a place that looks very much like Bedford Falls, but after 10 minutes in line at the bank or in the locker room where the squirts are changing for hockey I know I'm in Pottersville.

I'm betting this was as much the case in Capra's time as it is in our own. He loved America but was watching the triumph of Pottersville. That's why, in the last scene, George looks at his friends with terror. He's happy to be alive, but he's disillusioned, wised up in just the worst way. He finally knows the world as it really is, what his friends are capable of, the dark potential coiled in each of them. His wife is a spinster in Pottersville because, if she's not with George, she cannot be anything. She's just one of two characters who are, in fact, the same in both worlds, the other being Mr. Potter. Everyone else is two-faced, masked. Simply put, George has been cursed with knowledge, shown the truth of the world -- seen hidden things. It's the sort of vision that makes a person go insane.

Instead of ending the movie 20 minutes early, it might be interesting to let it run for another hour, to see the hero after the guests have left the house and the money has been collected and the children gone to sleep -- George left to grapple alone with the meaning and the message of what he has been allowed to see. He is like Jacob and he has wrestled with the angel and carries a terrible burden. He would either sit quietly in darkness, or weep like a baby, or wander through the streets of Pottersville, shouting, "Vanity of vanities, all is vanity."