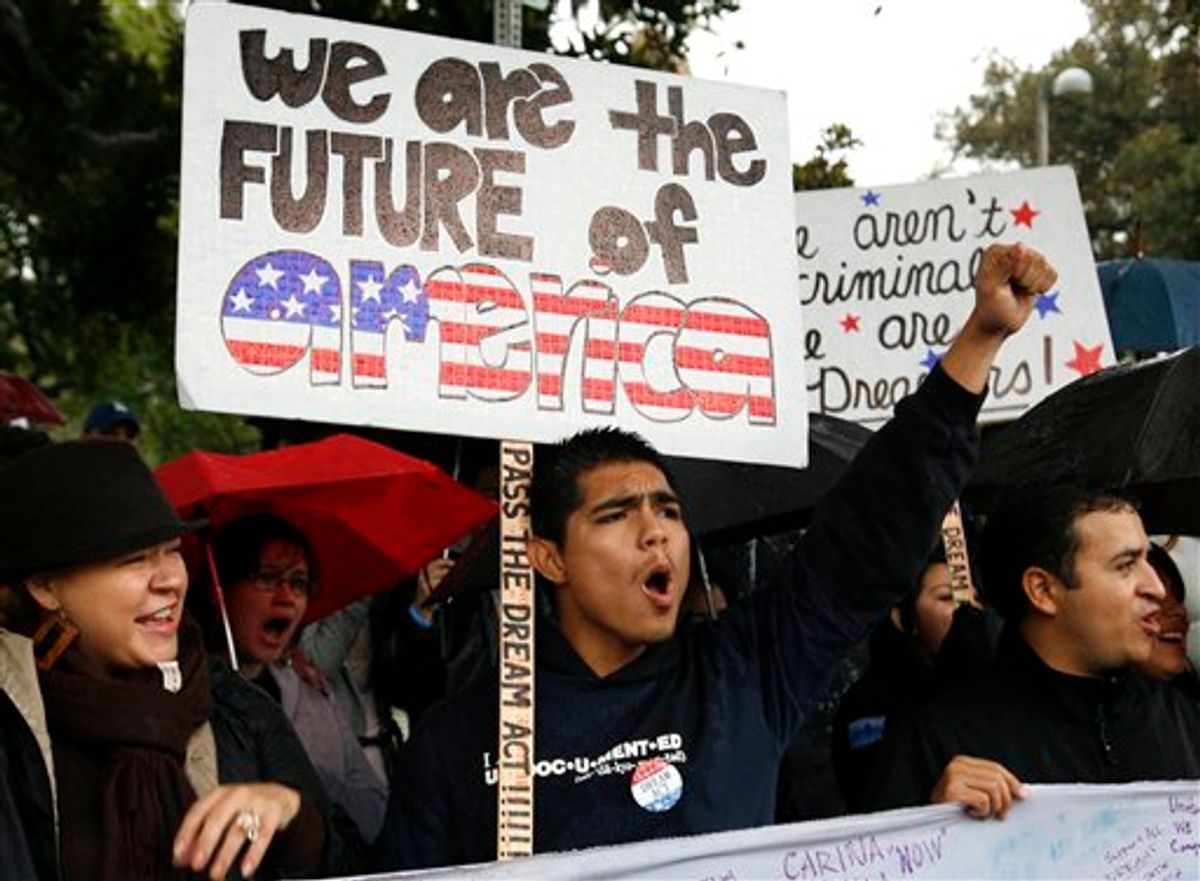 Undocumented college student Jorge Herrera, 18, center, of Carson, Calif., rallies with students and Dream Act supporters in Los Angeles, Saturday, Dec. 18, 2010. The Dream Act, which failed to move on in the Senate, would have given provisional legal status to illegal immigrants brought to the country as children. (AP Photo/Jason Redmond) (AP)
--

The end of the year means a turnover of House control from Democratic to Republican and, with it, Congress' approach to immigration.

In a matter of weeks, Congress will go from trying to help young, illegal immigrants become legal to debating whether children born to parents who are in the country illegally should continue to enjoy automatic U.S. citizenship.

Such a hardened approach -- and the rhetoric certain to accompany it -- should resonate with the GOP faithful who helped swing the House in Republicans' favor. But it also could further hurt the GOP in its endeavor to grab a large enough share of the growing Latino vote to win the White House and the Senate majority in 2012.

Legislation to test interpretations of the 14th Amendment as granting citizenship to children of illegal immigrants will emerge early next session. That is likely to be followed by attempts to force employers to use a still-developing web system, dubbed E-Verify, to check that all of their employees are in the U.S. legally.

There could be proposed curbs on federal spending in cities that don't do enough to identify people who are in the country illegally and attempts to reduce the numbers of legal immigrants. Democrats ended the year failing for a second time to win passage of the Dream Act, which would have given hundreds of thousands of young illegal immigrants a chance at legal status.

House Republicans will try to fill the immigration reform vacuum left by Democrats with legislation designed to send illegal immigrants packing and deter others from trying to come to the U.S.

Democrats, who will still control the Senate, will be playing defense against harsh immigration enforcement measures, mindful of their need to keep on good footing with Hispanic voters. But a slimmer majority and an eye on 2012 may prevent Senate Democrats from bringing to the floor any sweeping immigration bill, or even a limited one that hints at providing legal status to people in the country illegally.

President Barack Obama could be a wild card.

He'll have at his disposal his veto power should a bill denying citizenship to children of illegal immigrants make it to his desk. But Obama also has made cracking down on employers a key part of his administration's immigration enforcement tactics.

Hispanic voters and their allies will look for Obama to broker a deal on immigration as he did on tax cuts and health care. After the Dream Act failed in the Senate this month, Obama said his administration would not give up on the measure. "At a minimum we should be able to get Dream done. So I'm going to go back at it," he said.

The president has taken heavy hits in Spanish-language and ethnic media for failing to keep his promise to address immigration promptly and taking it off the agenda last summer. His administration's continued deportations of immigrants -- a record 393,000 in the 2010 fiscal year -- have also made tenuous his relationship with Hispanic voters.

John Morton, who oversees Immigration and Customs Enforcement, said in a recent conference call that there are no plans to change the agency's enforcement tactics, which are focused on immigrants who commit crimes but also have led to detaining and deporting many immigrants who have not committed crimes.

The agency also will continue to expand Secure Communities, the program that allows immigration officials to check fingerprints of all people booked into jail to see if they are in the country illegally. Both illegal immigrants and residents can end up being deported under the program, which the Homeland Security Department hopes to expand nationwide by 2013.

Many of those attending a recent gathering of conservative Hispanics in Washington warned that another round of tough laws surrounded by ugly anti-immigrant discussions could doom the GOP's 2012 chances.

Former House Speaker Newt Gingrich, a possible 2012 candidate, cited Meg Whitman's failed gubernatorial bid in California despite her high spending. When 22 percent of the electorate is Latino, candidates can't win without a vigorous presence in the Hispanic community and a "message that is understandable and involves respect," Gingrich said. Even so, Gingrich was unwilling to call on his fellow Republican senators to drop their opposition to the Dream Act, saying the legislation should not have been considered without giving lawmakers a chance to amend it.

The next Congress will be populated with many newcomers elected on a platform of tougher immigration enforcement. They'll have ready ears in Republican Rep. Lamar Smith of Texas, who will chair the House Judiciary Committee, and Rep. Steve King of Iowa, who is expected to chair the committee's immigration subcommittee.

That's a recipe for more measures aimed at immigration enforcement, including requiring businesses to use E-Verify rather than eyeballing paper documents to check workers' citizenship and legal residency status.

"I've already told the business community it's going to happen," said Beto Cardenas, executive counsel to Americans for Immigration Reform, a coalition of business leaders who support overhauling immigration laws. Changes to immigration law contained in appropriations and authorization bills, where immigration enforcement hawks are likely to tuck some measures, would also be tough to reject.

But more controversial measures such as attempts to deny citizenship to children of people who are in the U.S. without permission could be tempered by GOP leaders aware of the need to curry more favor with Hispanic voters.