Can we learn to love Bristol Palin?

She's buying a home, possibly college-bound and getting on with her life -- isn't it time her critics did the same? 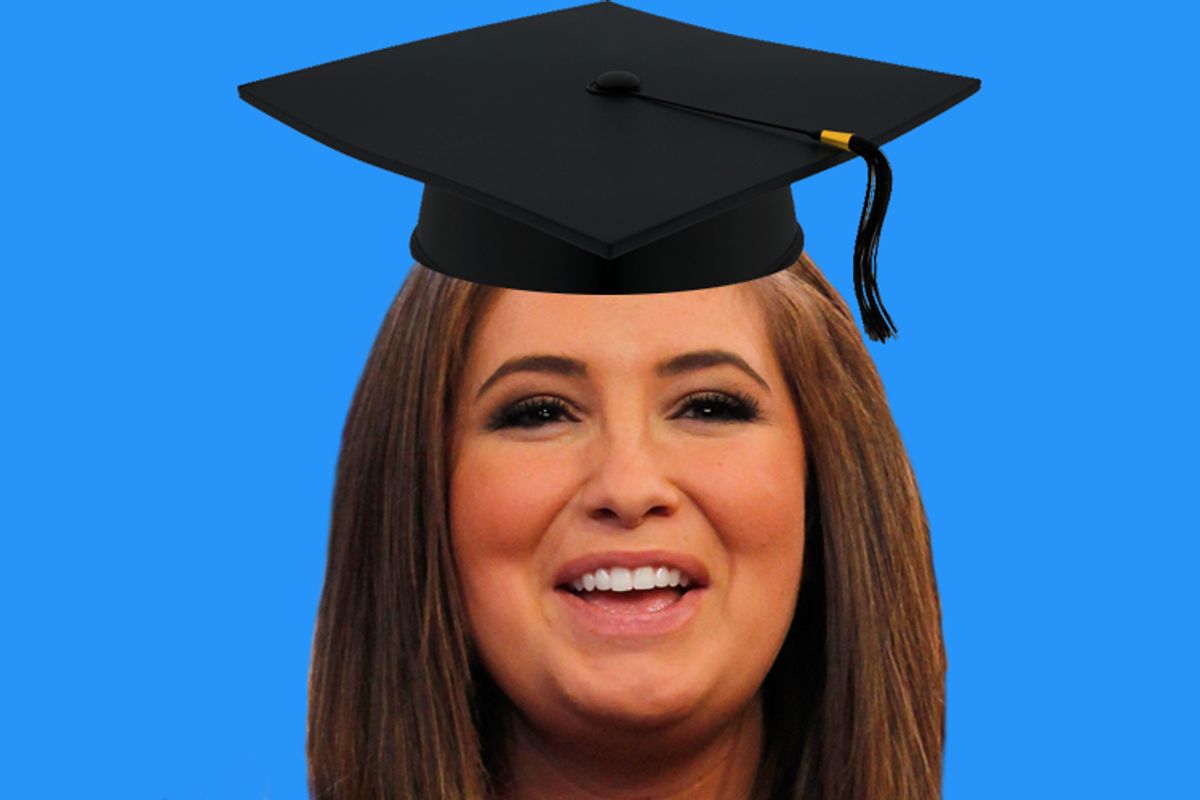 Bristol Palin certainly wouldn't be the first young woman to work her way through college on the income she earned for her dancing -- but she may be the most unlikely. The 20-year-old single mother, daughter of a malaprop-prone former governor and the most beloved "Dancing with the Stars" contender the Tea Party ever got is apparently looking to get the hell out Wasilla and head to those ivy covered halls of higher learning in Tempe, Ariz.

In a move sure to make anyone paying $1,000 a month for a studio weep just a little, Miss Palin recently closed on a five-bedroom, 3,900-square-foot house in a development outside of Phoenix. The house, which went into foreclosure earlier this year, sold for $172,000 -- nearly half the amount the original owners paid just four years ago. Gangsta style, Palin paid cash for it, allegedly with her "Dancing with the Stars" earnings. She's reportedly making the move with an eye to attend Arizona State.

So let's get this straight -- at an age when plenty of young adults are still living at home, working part time at Chili's, and making their biggest plans based on the merits of $5 pitchers or Jager on tap, Bristol Palin is a home owner contemplating her educational future. You'd think that maybe the prospect of Palin -- a girl who got knocked up at 17, has a high profile and an often justly reviled family, and whose recent claim to fame involved dancing in a gorilla suit -- becoming a property owning, possibly matriculating member of society would be enough to make her numerous detractors pause a moment and say, hey, good for her.

The snark train never stops, and the very Palinness of her is by now sufficient cause for disdain. Gawker's already envisioning "Bristol Palin: The College Years!" as "the best Palin reality show yet" and the Frisky deems her ability to buy a house "depressing," wondering if she's going to "submit one of her many Facebook rants as an entrance essay." Wonkette, most stingingly of all, drolly surmised her college experience would consist of "at least for the one year before dropping out, and 12 subsequent years [of] online classes at home in an Alaska trailer park in order to graduate."

It's not that Palin hasn't brought on a fair degree of the vitriol herself. She is, after all, the nation's least convincing argument for abstinence-only education. This fall, she managed to milk her family's political ties into prominent roles on not one but two prime-time series -- "Dancing with the Stars" and "Sarah Palin's Alaska." And her paso doble does leave something to be desired. Her choice of Arizona is not exactly akin to running off to join the Peace Corps -- or even a more traditional college town like Burlington or Ann Arbor. She's off instead to a place with one of the highest foreclosure rates in the nation, to possibly attend the university that last year deemed Barack Obama unworthy of an honorary degree. Yet despite Arizona State's pickiness about Obama, the school's traditional commitment to accepting anyone with a photo ID and the application fee makes it ongoing ripe punchline fodder, including a sly jibe on "30 Rock" just this month. The opportunity for shooting the whole story down is just too ripe. But why shouldn't Bristol go to college? Her mom went to six. And if she's not, like Barack Obama, Columbia University material, why would that automatically make her some pathetic, trailer-dwelling ne'er do well?

Bristol Palin is never going to run off to Berkeley to join the lesbian faction of NORML. She's just not. The most radical she might get is to acknowledge the importance of safe sex in a PSA with The Situation.  She's a product of her community and her family, a kid with a toddler who has endured some really crappy treatment in the media and online community because of her parents, because of her often conflicting beliefs, because of her fluctuating BMI, all while often displaying an admirably self-deprecating awareness of her own adolescent awkwardness. It makes the automatic reviling of her for going to a town not prosperous enough, with a college not discriminating enough, a perfect storm of all the worst clichés of liberal elitism.

She's a grown woman and she's likely used to it. But there is something pretty sad about the knee-jerk pot shots directed at a young woman embarking on her first real taste of independence. Can't we leave the douchey class war mongering to the other side? Can't we at least wait for her to do something horrible before hating on her for ... what? Buying a house? Considering college? Sorry, I thought that was the American dream -- one to which everyone surely has a right to aspire. And if Bristol Palin is growing up, moving on, and maybe even trying to learn a thing or two (yes, even at Arizona State), isn't it time her critics did likewise?