The comedian's 92nd Street Y debacle further endeared him to fans, but his new novel is a sad disappointment 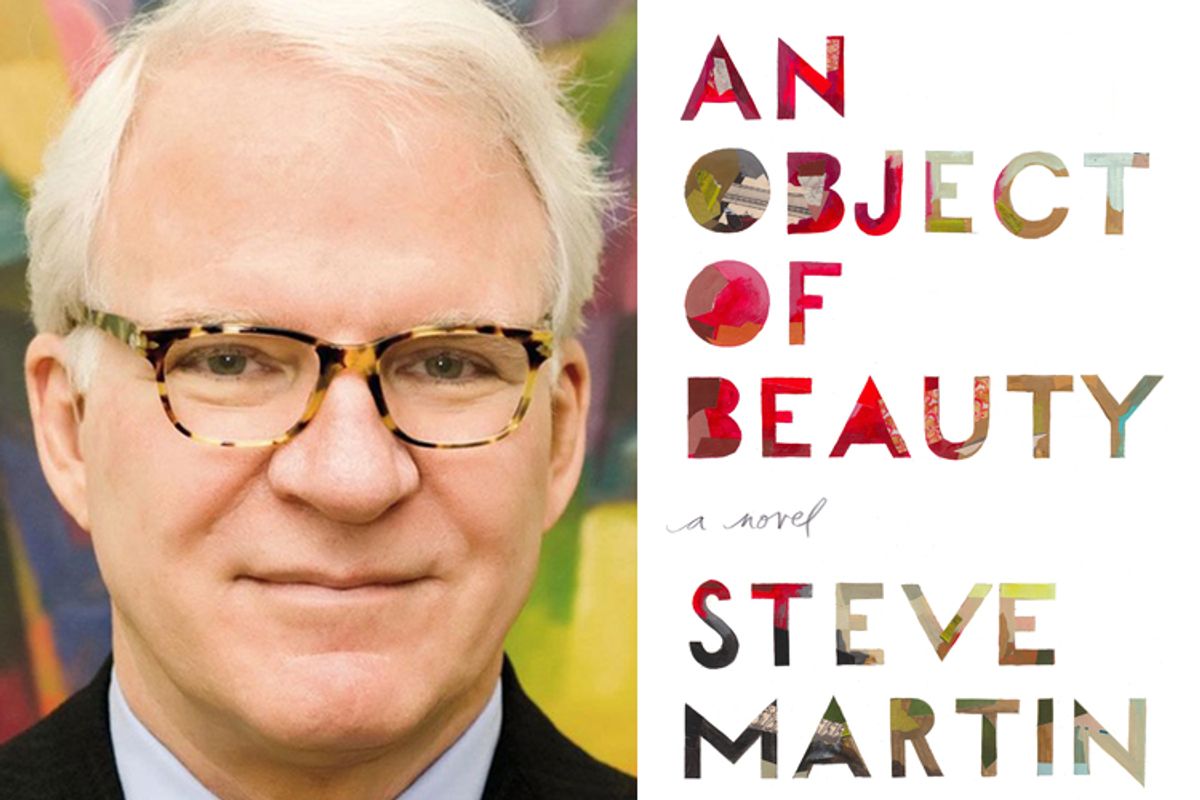 Steve Martin, author of "An Object of Beauty"
--

I was inspired to pick up Steve Martin's new novel, "An Object of Beauty", by a ridiculous kerfuffle that took place at New York's 92nd Street Y at the end of November. As just about everyone seems to know by now, Martin and a moderator, Deborah Solomon of the New York Times, were conducting an open discussion about the novel and its subject, the contemporary art world. Then, halfway through the talk, the two speakers were given the thumbs-down "American Idol"-style, with a Y employee coming on stage with a note for Solomon: "Discuss Steve's career." It seems that the event was being telecast on closed-circuit TV across the country, and viewers were e-mailing in their displeasure that Martin and Solomon were focusing too much on art and not enough on Martin's showbiz reminiscences.

Backlash ensued, with bloggers ridiculing the philistine viewers and Martin taking a measure of revenge on the Times' op-ed page. The whole thing was a disaster for the Y, which had impulsively offered the live audience their money back, thereby insulting Martin even more and reaping sneers from New York's chattering class: Here, after all, was one of the city's premiere cultural institutions catering to lowbrow taste and privileging vapid entertainment over intellectual substance. For Martin the incident seems to have proved a bonanza, drawing much more attention to "An Object of Beauty" than the book might have garnered under normal circumstances.

After all this drama I really, really wanted to like "An Object of Beauty." The excesses and vicissitudes of the art market are always riveting, and Martin's intelligence is evident from the way he has conducted his multifaceted career. But a sad disappointment was in store: The book, though mildly diverting, turns out to be the sort of thing that might not have found a publisher if it hadn't had a famous name attached. To be perfectly honest, it's like chick-lit, only written from a male point of view.

Martin has chosen to satirize the art business through the device of the rake's progress. In this case the rake is a woman, the ruthless and ambitious young Lacey Yeager. Over the course of 20 years or so she goes from "the spice rack of girls at Sotheby's" to a position at a high-end Madison Avenue gallery to, finally, a downtown gallery of her own. As she moves onward and upward Lacey leaves a trail of lustful males in her wake, and Martin himself is so busy slobbering over his heroine that he seems not to have noticed that she doesn't quite come alive as a character: She is neither someone readers can root for nor someone who fascinates by repelling, in the great tradition of Becky Sharp. She is just a not-very-likable female, more a device for reflecting the zeitgeist than a living human being.

Not that Martin can't nail his targets when he has a mind to. It's clear that he knows a great deal about the art business and understands the submerged psychological forces governing its ebb and flow: the group-think and mass hysteria, the exhibitionism, the Darwinian forces that elevate some works and kill others. And when Martin gets to the contemporary art bubble of the late 1990s he really moves into his element:

Art was about to acquire the aura of an internationally recognizable asset, a unique and emotional emblem of the good life.

Whether it was any good or not, the sheer amount of it -- to the dismay of cranky critics -- was redefining what art could be. Since the 1970s, art schools had shied away from teaching skills and concentrated on teaching thought. Yet this was the first time in conventional art history where no single movement dominated, no manifesto declared its superiority, and diversity bounced around like spilled marbles on concrete.

Indeed. Martin has fun with fads of the period: "pale art" ("faint things with not much going on in them"); "high-craft OCD" ("those guys who take a thousand pinheads and paint a picture of their grandmother on every one"); "low-craft ironic" ("a fancy name for wink-wink nudge-nudge") -- and let's not forget "angry pussy": art made with menstrual blood. Daniel Franks, Martin's self-effacing, Nick Carraway-style narrator, is a congenial guide to the scene and its tribal rites.

"In dialogue" [Daniel comments] was a new phrase that art writers could no longer live without. It meant that hanging two works next to or opposite each other produced a third thing, a dialogue, and that we were now all the better for it. I suppose the old phrase would have been "an art show," but now we were listening. It also hilariously implied that when the room was empty of viewers, the two works were still chatting.

All this is amusing enough, and if only Martin would stick to cultural satire he would be fine. But he keeps reverting obsessively to overheated melodrama and tacky soft-core sex reminiscent, oddly enough, of the work of pulp-mistress Judith Krantz. Here for instance is Lacey enjoying the high life with her rich Parisian beau, Patrice Claire:

They walked around the block first, each proud to be on the other's arm. The sun was just dropping, and the bedecked, bejeweled mannequins in the store windows were like saluting soldiers as they strolled in their enchanted state of opulent seduction.

Now, feeling the kind of euphoria that can overtake you at this time of day, at this temperature, at this level of breeze, after one drink, when the person beside you is making you alert and keen and the idea of being with anyone else is not imaginable, Lacey and Patrice went back to the Carlyle.

They ordered room service, sat at their own corner table with views across and up Manhattan, and sipped a bottle of wine until there was nothing left to do but kiss, and kiss again, for anyone with a pair of binoculars to see. Lacey led him into the bedroom, where the hotel sheets were fresh and rich, where the lighting had been preset, and where, placed opposite the bed, illuminated by two candles that threw their light upward, was the Matisse that had overseen their last coupling.

The scene goes on for some time in this vein, with Lacey donning, after sex, "a robe that swathed her like meringue." (Could this be a hotel bathrobe, or one stashed away by Patrice for just such an occasion? There is no mention of Lacey having brought an overnight bag to their date.) "An Object of Beauty" contains any number of such episodes, revealing the surprising fact that at the age of 65, and having enjoyed spectacular success and world fame for four decades now, Steve Martin is still as bedazzled by glamour as any young man from the provinces.

Such starry-eyed wonder sits awkwardly with Martin's knowing cynicism about the business and marketing of art. Just what kind of a book was Martin attempting to write? A satirical novel? A serious novel? A novel of ideas? A sour romance? Sophisticated gossip? "An Object of Beauty" never quite succeeds on any of these levels; it may please for an hour or two, in the manner of a magazine article, but it is too artificial and contrived to hold our interest for very long.