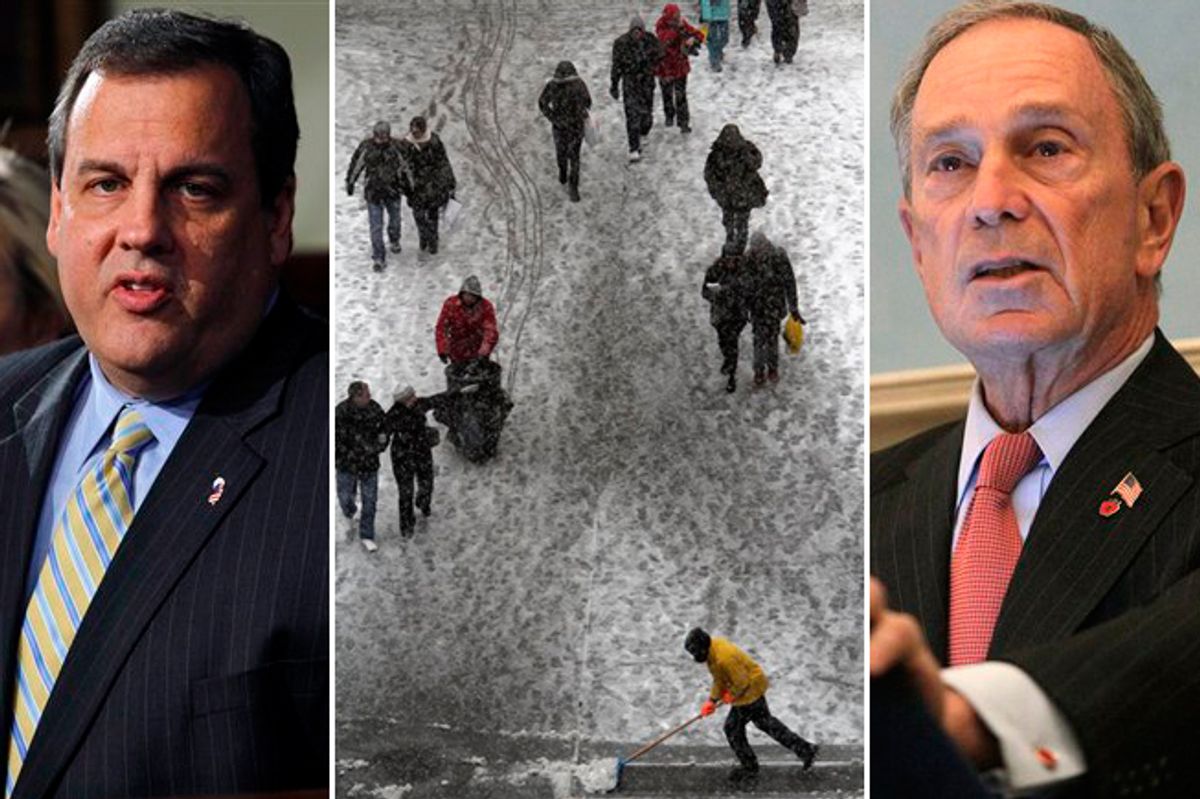 Two East Coast political superstars with national ambitions were caught completely unprepared for the most predictable of local political headaches this week: A blizzard. It was a bad one, to be sure -- two feet in parts of New York City and 30 inches in parts of New Jersey -- but the area is hammered by big winter storms pretty regularly. New York Mayor Michael Bloomberg and New Jersey Gov. Chris Christie -- two names on the 2012 shortlists of some of America's most annoying pundits -- were both checked out and unprepared, and both should suffer dearly among their constituents.

Bloomberg and Christie are similar political animals, despite superficial differences. Bloomberg is prickly where Christie is belligerent. Mike's primary weapon is withering sarcasm, while Christie just out-shouts the other guy. Fastidious Bloomberg would ban fast food if he could, while Christie uses his weight to prove his "regular guy" bona fides. But both sell themselves as consummate managers, able to run government as efficiently as a small business. Both proclaim themselves unbeholden to special interests, while both imagine that the role of government is to not get in the way of the virtuous, job-producing rich. They're both rich, accustomed to the better things in life, and largely unfamiliar with and incurious about how the other half lives.

Bloomberg was probably at his Bermuda weekend estate while this storm was gathering -- though he was smart enough to make it back into town in time for a press conference yesterday. Christie, idiotically (he hasn't been at this as long as Mayor Mike), is in Florida. Even more idiotically, his lieutenant governor is in Mexico. (The lieutenant governor position was just recently created in order to avoid situations like this. A Democratic state senator is in charge of storm response.)

So New Jersey's tough-talking, take-no-prisoners governor is literally at Disney World while dozens of vehicles remain strapped on highways and some post offices are unable to deliver the mail. The worst part is that Christie left on Sunday, when the storm was on its way up the coast and his Lt. Gov. was already in Mexico. Christie's already less popular in Jersey than his non-Jersey-residing admirers would have you believe, and this embarrassment certainly won't help.

Unfortunately for Chris Christie, snow doesn't go away when you post a video of you yelling at it to YouTube. Nor can you fire it.

Bloomberg, meanwhile, is in this third term as mayor. He should know how to get New York through a blizzard. This was a big storm, but the city had a big storm that dropped just as much snow in Central Park just last February, and it was cleaned up in 24 hours, as usual. No one has explained why this response has been so, so much worse. (Though there is this thing about having hundreds fewer sanitation workers.)

As of this morning, Bloomberg's block looked like this (City Hall was similarly cleaned out within hours of the storm finishing). Queens looks like this. Much of the outer boroughs -- and even vast swaths of the marginally less wealthy sections of Manhattan -- remain buried. Side streets in Astoria, Bay Ridge and the majority of Staten Island haven't seen plows.

Bloomberg didn't seem to get how bad things were outside the Fifth Avenue corridor at his presser yesterday ("the world has not come to an end"), though today he made a big show of being angry. Except, as usual, he seemed angry at the people who were frustrated at his administration's lackluster response to the blizzard.

Any regrets about how he handled this? "You know," Mayor Mike said, "I regret everything in the world." Poor Bloomberg, as always the real victim of whatever he's getting grilled about by reporters.

New York is already weary of its little tyrant. He barely won reelection while running against a nonentity and no one in town -- besides a couple billionaires, of course, and people who appear on "Morning Joe" -- seems thrilled at the prospect of "President Bloomberg." Most importantly for Bloomberg's future plans, New Yorkers don't forgive a crappy response to a snowstorm. Outer-borough politicians -- some of them Bloomberg allies -- are beginning to pile on, too, and Christine Quinn, the City Council speaker whose public breaks with Bloomberg are rare and calculated, will hold hearings.

Elected on promises to Just Get Things Done, Bloomberg and Christie are both looking both utterly unprepared for a storm that every local news station warned every resident about days in advance, and completely powerless to clean up the mess. Even worse, while both talk the "shared sacrifice" austerity talk that delights sober-minded centrists on editorial boards across the nation, they're showing that all that our betters will ever have to "sacrifice" is maybe a day or two of vacation time -- and even that's optional.

Newark Mayor Cory Booker, meanwhile, has been going around town personally shoveling people's cars out of snowdrifts. (And talking about it on Twitter, so that everyone knows he's doing this.)