The merger of journalists and government officials

On CNN last night, I debated anchor Jessica Yellin and Bush official Fran Townsend and their views were identical 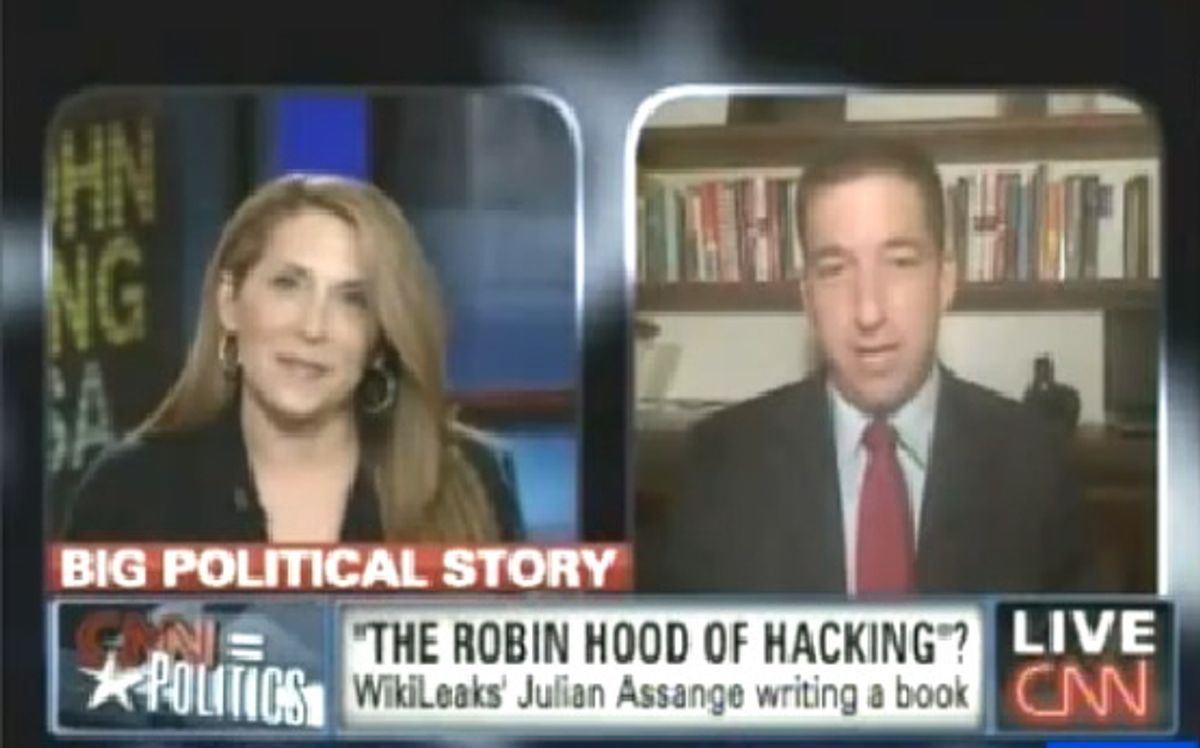 The video of the CNN debate I did last night about WikiLeaks with former Bush Homeland Security Adviser (and CNN contributor) Fran Townsend and CNN anchor Jessica Yellin is posted below. The way it proceeded was quite instructive to me and I want to make four observations about the discussion:

(1) Over the last month, I've done many television and radio segments about WikiLeaks and what always strikes me is how indistinguishable -- identical -- are the political figures and the journalists.  There's just no difference in how they think, what their values and priorities are, how completely they've ingested and how eagerly they recite the same anti-WikiLeaks, "Assange = Saddam" script.  So absolute is the WikiLeaks-is-Evil bipartisan orthodoxy among the Beltway political and media class (forever cemented by the joint Biden/McConnell decree that Assange is a "high-tech Terrorist,") that you're viewed as being from another planet if you don't spout it.  It's the equivalent of questioning Saddam's WMD stockpile in early 2003.

It's not news that establishment journalists identify with, are merged into, serve as spokespeople for, the political class:  that's what makes them establishment journalists.  But even knowing that, it's just amazing, to me at least, how so many of these "debates" I've done involving one anti-WikiLeaks political figure and one ostensibly "neutral" journalist -- on MSNBC with The Washington Post's Jonathan Capehart and former GOP Congresswoman Susan Molinari, on NPR with The New York Times' John Burns and former Clinton State Department official James Rubin, and last night on CNN with Yellin and Townsend -- entail no daylight at all between the "journalists" and the political figures.  They don't even bother any longer with the pretense that they're distinct or play different assigned roles.  I'm not complaining here -- Yellin was perfectly fair and gave me ample time -- but merely observing how inseparable are most American journalists from the political officials they "cover."

(2) From the start of the WikiLeaks controversy, the most striking aspect for me has been that the ones who are leading the crusade against the transparency brought about by WikiLeaks -- the ones most enraged about the leaks and the subversion of government secrecy -- have been . . . America's intrepid Watchdog journalists.  What illustrates how warped our political and media culture is as potently as that?  It just never seems to dawn on them -- even when you explain it -- that the transparency and undermining of the secrecy regime against which they are angrily railing is supposed to be . . . what they do.

What an astounding feat to train a nation's journalist class to despise above all else those who shine a light on what the most powerful factions do in the dark and who expose their corruption and deceit, and to have journalists -- of all people -- lead the way in calling for the head of anyone who exposes the secrets of the powerful.   Most ruling classes -- from all eras and all cultures -- could only fantasize about having a journalist class that thinks that way, but most political leaders would have to dismiss that fantasy as too extreme, too implausible, to pursue.  After all, how could you ever get journalists -- of all people -- to loathe those who bring about transparency and disclosure of secrets?  But, with a few noble exceptions, that's exactly the journalist class we have.

There will always be a soft spot in my heart for Jessica Yellin because of that time when she unwittingly (though still bravely) admitted on air that -- when she worked at MSNBC -- NBC's corporate executives constantly pressured the network's journalists to make their reporting favorable to George Bush and the Iraq War (I say "unwittingly" because she quickly walked back that confession after I and others wrote about it and a controversy ensued).  But, as Yellin herself revealed in that moment of rare TV self-exposure, that's the government-subservient corporate culture in which these journalists are trained and molded.

(3) It's extraordinary how -- even a full month into the uproar over the diplomatic cable release -- extreme misinformation still pervades these discussions, usually without challenge.  It's understandable that on the first day or in the first week of a controversy, there would be some confusion; but a full month into it, the most basic facts are still being wildly distorted.  Thus, there was Fran Townsend spouting the cannot-be-killed lie that WikiLeaks indiscriminately dumped all the cables.  And I'm absolutely certain that had I not objected, that absolute falsehood would have been unchallenged by Yellin and allowed to be transmitted to CNN viewers as Truth.  The same is true for the casual assertion -- as though it's the clearest, most obvious fact in the world -- that Assange "committed crimes" by publishing classified information or that what he's doing is so obviously different than what investigative journalists routinely do.  These are the unchallenged falsehoods transmitted over and over, day after day, to the American viewing audience.

(4) If one thinks about it, there's something quite surreal about sitting there listening to a CNN anchor and her fellow CNN employee angrily proclaim that Julian Assange is a "terrorist" and a "criminal" when the CNN employee doing that is  . . . . George W. Bush's Homeland Security and Terrorism adviser.  Fran Townsend was a high-level national security official for a President who destroyed another nation with an illegal, lie-fueled military attack that killed well over 100,000 innocent people, created a worldwide torture regime, illegally spied on his own citizens without warrants, disappeared people to CIA "black sites," and erected a due-process-free gulag where scores of knowingly innocent people were put in cages for years.  Julian Assange never did any of those things, or anything like them.  But it's Assange who is the "terrorist" and the "criminal."

Do you think Jessica Yellin would ever dare speak as scornfully and derisively about George Bush or his top officials as she does about Assange?  Of course not.  Instead, CNN quickly hires Bush's Homeland Security Adviser who then becomes Yellin's colleague and partner in demonizing Assange as a "terrorist."  Or consider the theme that framed last night's segment:  Assange is profiting off classified information by writing a book!   Beyond the examples I gave, Bob Woodward has become a very rich man by writing book after book filled with classified information about America's wars which his sources were not authorized to give him.  Would Yellin ever in a million years dare lash out at Bob Woodward the way she did Assange?  To ask the question is to answer it (see here as CNN's legal correspondent Jeffrey Toobin is completely befuddled in the middle of his anti-WikiLeaks rant when asked by a guest, Clay Shirky, to differentiate what Woodward continuously does from what Assange is doing).

They're all petrified to speak ill of Bob Woodward because he's a revered spokesman of the royal court to which they devote their full loyalty.  Julian Assange, by contrast, is an actual adversary -- not a pretend one -- of that royal court.  And that -- and only that -- is what is driving virtually this entire discourse:

UPDATE:  At the CNN blog, Jessica Yellin responds to this post.  Standing on its own, the response is not unreasonable, but I'll leave it to others to decide if her claims are consistent with her comments and conduct during the segment.