Shocker: Obama to give America back to Indians 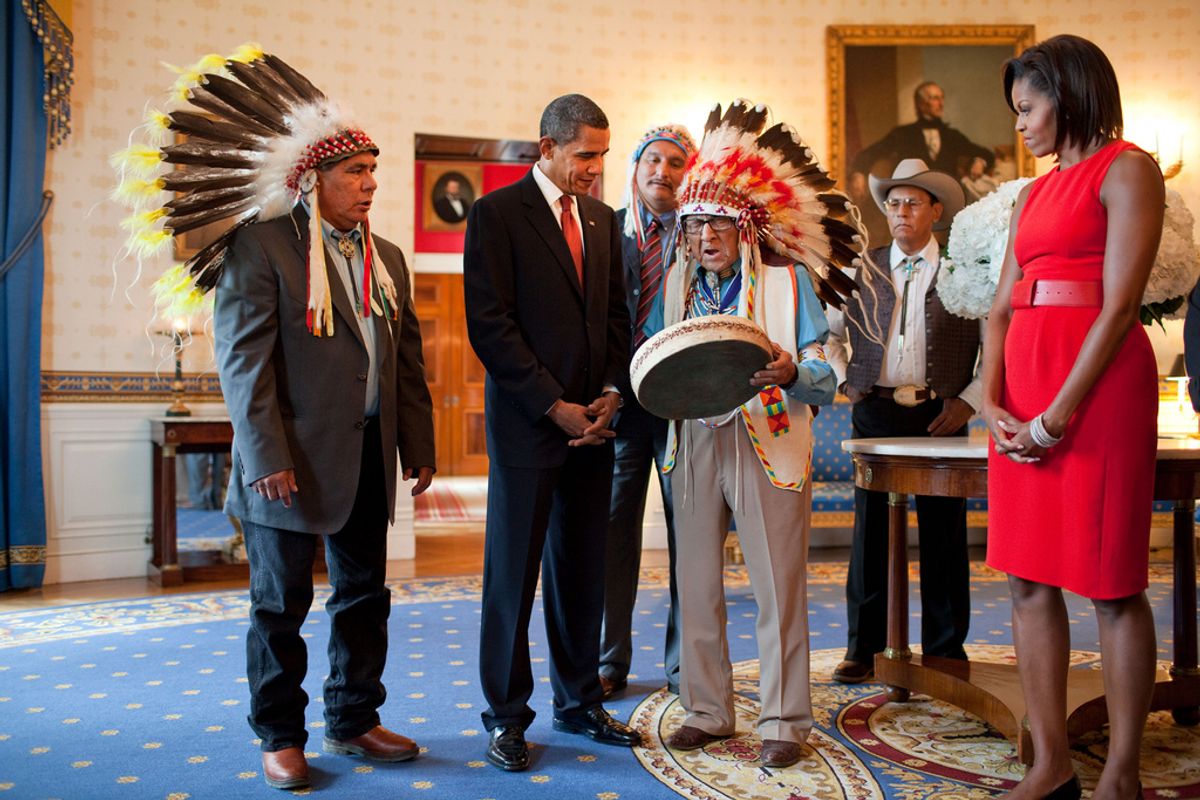 Presidential Medal of Freedom recipient Joseph Medicine Crow shows a drum to President Barack Obama and First Lady Michelle Obama during a reception for recipients and their families in the Blue Room of the White House, August 12, 2009. (Official White House photo by Pete Souza) This official White House photograph is being made available only for publication by news organizations and/or for personal use printing by the subject(s) of the photograph. The photograph may not be manipulated in any way and may not be used in commercial or political materials, advertisements, emails, products, promotions that in any way suggests approval or endorsement of the President, the First Family, or the White House. (The White House)
--

Congratulations, 2010, for fitting in one more completely insane made-up right-wing scandal: Barack Obama is going to give Manhattan back to the Indians! Also the U.N. will help, because grrrr, the U.N.!

Earlier this month, Obama said the U.S. would support the U.N.'s "Declaration on the Rights of Indigenous People," a non-legally binding promise to finally treat indigenous peoples with some small amount of decency after hundreds of years of the government murdering them and expelling them from their homes and forcibly relocating them to barren desert ghettos and now just letting them live in conditions of appalling, abject poverty. Bush refused to sign on to this, because, I dunno, it was from the U.N., and it might lead to frivolous lawsuits, or something? It's a non-binding Declaration that basically says "we will be nice to indigenous people," there's no good reason not to support it.

President Obama is voicing support for a U.N. resolution that could accomplish something as radical as relinquishing some U.S. sovereignty and opening a path for the return of ancient tribal lands to American Indians, including even parts of Manhattan.

The issue is causing alarm among legal experts.

Oh, I bet it is. WND-founder Joseph Farah has a little column where he repeats this insane story, but then he quotes some egg-head professor who says that all the tribes want is some "open lands/spaces for repurchase," which doesn't really sound like "giving back" Manhattan to the Native Americans.

I say if you're gonna do it, do it right and actually give New York back to the Delaware Indians! I'd rather be ruled by them than by Bloomberg and Albany.

(Also why don't Scalia-style Constitutional originalists ever insist that America honor its various broken treaties with all the Indians whose lands we stole as we systematically removed and massacred them? I know that would entail giving them back the entirety of Oklahoma, among lots of other amusing things, but the supremacy of treaties is in the damn Constitution! Although I guess Article Six, with its federal supremacy clause and its no religious test talk, has always been the article that right-wingers are not particularly enthusiastic about.)