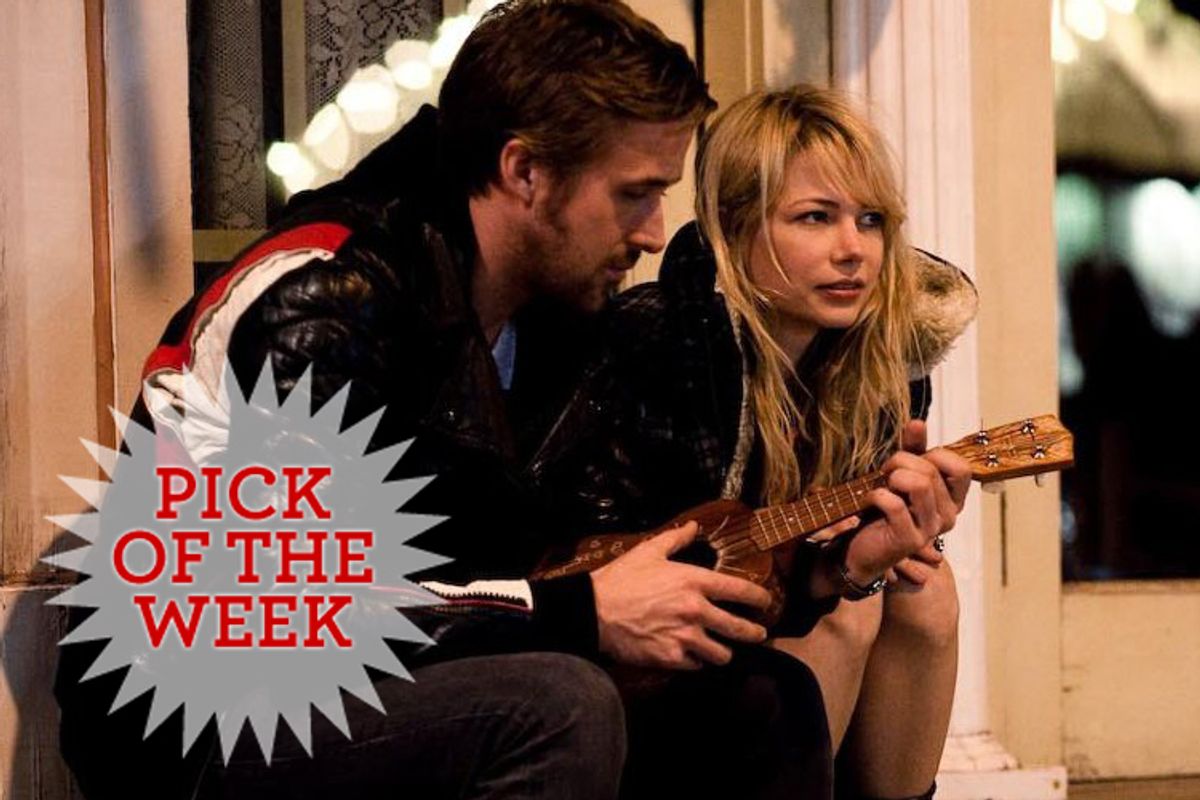 Having played every major film festival in the Western Hemisphere, become a talking point for the movie world's chattering class, and been gifted with a torrent of free publicity thanks to its (now rescinded) NC-17 rating, "Blue Valentine" is finally ready to face the public. Whether the public is genuinely interested in a sexually and emotionally frank film about a working-class American marriage that channels improv theater from one direction and European art cinema from another is an open question. (No matter what you may have read elsewhere, the NC-17 had little or nothing to do with oral sex. "Blue Valentine" features one intense sex scene with considerable nudity that raises the issue of marital rape, and as usual the MPAA freaked out about honest depictions of ambiguous adult sexuality. Somebody may go down on somebody else, but that's hardly the central issue.)

"Blue Valentine" is much likelier to be a film that wins awards than a film that makes millions, and it could be too specific and intense an experience to be either. But I reject the idea, which I've heard here and there, that there's something condescending or ethnographic about director and co-writer Derek Cianfrance's extraordinary time-lapse portrait of Dean (Ryan Gosling) and Cindy (Michelle Williams), which goes back and forth from their whirlwind, violent romance to a present tense in a Pennsylvania trailer home when their relationship hits the critical list. This movie may or may not be your cuppa joe, but its integrity is beyond question, and Cianfrance is clearly drawing on his life experience. (Having met the principals in this film, I have little doubt that Gosling's character is modeled on the director.)

It probably tells you something about the potential audience for this kind of movie, though, that "Blue Valentine" premiered to mixed reviews last January at Sundance, but really broke out among the hardcore cinephile set at Cannes, where it attracted more attention than any other American film and Gosling and Williams suddenly became Oscar contenders. Here's what I wrote about the movie at the time (edited slightly for context and clarity), with a few excerpts from my interview with Gosling and Williams.

An intimate, gorgeous and wrenching portrait of a working-class marriage in what may be a state of terminal decay, "Blue Valentine" is not only the breakthrough American film at Cannes, but one of the best films here, period. It stars two hot young indie-oriented actors in Ryan Gosling and Michelle Williams, who are extraordinary as Dean and Cindy, a couple who live in rural eastern Pennsylvania with their 5-year-old daughter. "Blue Valentine" shines a spotlight on aspects of American life rarely seen in the movies, and it resulted from a lengthy and intensive period of preparation and discovery.

Director Derek Cianfrance has been working on the film on and off for 12 years, in between collecting unemployment, working odd jobs and making documentaries. Williams has been on board for six years and Gosling for four. To prepare for the roles, Cianfrance made the actors live together for several weeks in the movie couple's prefab home, buying groceries at the supermarket, baking a birthday cake for Frankie (Faith Wladyka), their fictional daughter, putting up a Christmas tree and wrapping presents. Gosling worked shifts for a moving company, one of Dean's jobs in the film. Williams gained a fair bit of weight to play her character, a nurse of about 30 in the movie's present tense.

Sometimes this kind of intense, Method-based character construction -- although hardly anyone goes into it this hard or this deep -- can seem like phony-baloney actorly pretense. But in "Blue Valentine" the results are on the screen, in compassionate, nuanced performances that are utterly free of condescension or sentimentality. As we move back and forth between Dean and Cindy at the beginning of their relationship, six years earlier, and during the terrible two days that may end it, they never seem like heroes or villains. They are both sympathetic and both at fault, a pair of normal, damaged people who've been living together with not enough money and too many broken dreams and a pile of unanswered questions.

Cianfrance and cinematographer Andrij Parekh capture the domestic details of Dean and Cindy's life -- and their ill-fated excursion to the "Future Room," a suite in a couples-oriented theme motel that Dean likens to a "robot's vagina" -- in gorgeous, color-saturated close-ups that make the ordinary seem remarkable. In that light, it's not surprising that "Blue Valentine" has become one of the few movies to premiere at Sundance and then blow up huge at Cannes. (The last example that comes to mind is "An Inconvenient Truth.") Although the film couldn't possibly be more American in subject, setting and spirit, it has an intense, almost reverential aesthetic vision that recalls European art-house cinema.

Gosling and Williams recently greeted a small group of journalists for interviews at the rooftop lounge of their beachfront hotel. That sounds a little more glamorous than it was; the day was blustery and gray, so we huddled around a table in an indoor pavilion. Gosling, 29, is probably best known for his Oscar-nominated leading role in "Half Nelson." Williams, who is also 29, got her Academy nomination for "Brokeback Mountain" and has also appeared in films ranging from Scorsese's "Shutter Island" to Charlie Kaufman's "Synecdoche, New York" to Kelly Reichardt's forthcoming "Meek's Cutoff." She is also known as the former fiancée of the late Heath Ledger, and the mother of his daughter.

Both of you stuck with this project a long time. You could easily have moved on and forgotten about it.

Ryan Gosling: Twelve years for Derek, and I've been saying six years for you, is that true?

Michelle Williams: Yeah. [Counting to self.] Six or seven.

R.G.: For me, it's four. Which I thought was a lot. We've had a lot of time to think about it and talk about it.

What aspect of the movie did you like most at first?

M.W.: It was actually the future, meaning the time when the couple's on the outs. That section compelled me the most. That really got my attention. When I came back to it, I just had to find a deeper sense. I couldn't approach it with the same point of view, the same idea of how to play it. I had to find a new way to play that part, because I had already played it so much in my head. It had gotten boring. All the things that had compelled me about it, all the questions I had about it, I felt like I understood them. They had lost their mystery. So I had to find a new mystery.

Did the script change a lot during all those years of development?

M.W. Yeah. I mean, it changed while we were shooting. [To Gosling.] I was remembering that day that we showed up in Honesdale [Pa.], with nothing planned. It was crazy! We had no idea what we were going to do. We had 12 hours, an entire night, to shoot a walk-and-talk down a main street, with no plan.

R.G. A lot happened that didn't make it into the movie. One of the scenes that made it is that scene when we play the ukulele and sing and dance. Those things, you can't plan them. To Derek's credit, he creates an environment for these things to happen. Weren't we also throwing up at one point?

M.W.: That didn't make it! Sticking fingers in each other's mouths.

R.G.: Gagging each other and throwing up, making out in the rain. There was a lot of stuff. It's also to Derek's credit that one reason it lasted so long is his ability to change his mind. A lot of directors have one specific vision, and ultimately Derek had a vision for the film that was grander than the details. It was about the spirit of it, and he was able to change his mind about the details. It was supposed to be set in L.A., it was supposed to be by the ocean, it was supposed to be a million different ways. It's a wildly different movie, and yet it's the same. It's the same scenes, with different lines and different locations.

How well did you know each other before you made the film?

M.W.: It was a month. Remember? There was always a planned hiatus for the transition from young to older, and [there was the question of] how we were going to do that physically. After being there for a week, Derek decided to stretch it out. I decided I wanted to gain weight and Derek just made the space. We got to be in that house for about a month.

R.G.: Yeah, we did groceries, he put us on a budget. All the things that make couples want to wring each other's necks. He made sure that we did that.

In most movies about a breakup there's an inciting incident that explains why it happens: Somebody hits somebody, or somebody cheats. But this movie has nothing like that. It's more like it's happening the whole time, in every moment that we see. It's extraordinary, and much closer to real life, I think.

R.G.: Right. I think Derek didn't want it to be something that you can pin on one event. For him it was a study of: Where does love go? It's there and suddenly it's not, and each person has their own idea of what happened. You can't really pinpoint it as one specific event. It's all of these subtleties that you can't really talk about, and you have to watch and try to understand. He's asking the audience more than he's telling them. He's asking them: Here are these situations, what do you think is going wrong? What's the communication problem?

M.W.: And then it's like a poison. Like, it infiltrates everything. The smallest exchange you just can't get right. You don't know why, and you didn't set out to make it that way, but all the small things are wrong.

You remarked earlier that this movie might not be a universal experience. But anybody who's ever been in a relationship has had those moments.

R.G.: Well, there was one critic who described this film as "when emo-fascists attack." [Laughter.] Some people don't recognize it as their experience of love. They feel like it's too dramatic, they find it unrealistic. Personally, I feel like it represents as many of the shades of love as I've seen in my 29 years. Some people think it's totally foreign to them. I want their relationships!

Maybe people should know that this film isn't all misery. A lot of the story, after all, is about how Dean and Cindy fell in love in the first place. Do you think it's ultimately depressing or hopeful?

M.W.: I think it exists on both planes at the same time. Like it does in your mind, when you're in a relationship. We always sort of thought, maybe the future in the movie is just a dream. Maybe it's just a bad dream, maybe it's a premonition or a warning sign.

R.G.: I think there's tons of hope in the film. There's lots of positivity, and lots of scenes of people being in love and wallowing in that. I feel like it has balance.

M.W.: I also feel like it's two bad days. I almost forget that until I see the movie again. It was a long, arduous month of shooting, but what we're showing is two really bad days in a marriage. Somebody didn't get enough sleep and somebody drank too much. It's two days! How many days like that are there in the scope of a long-term marriage?