The right's war on healthcare is back 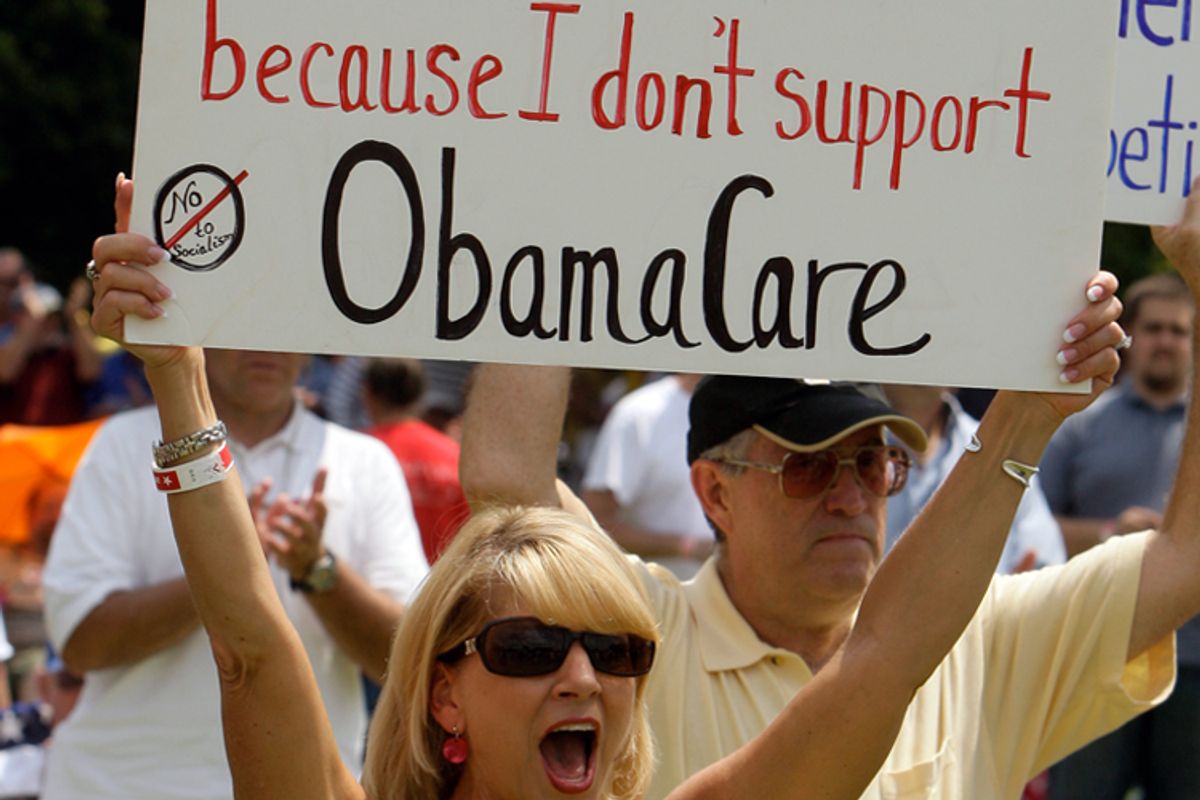 As polemics on the Obama administration’s healthcare reforms re-emerge, I often ruminate about a horse.

Lucky was an American Standard Bred gelding I owned. Compared to his quarter horse stable-mate, Lucky was unathletic and halfway clumsy. But he was also a sweetheart. As long as he could follow his buddy, anybody could ride him. Regardless of age or experience, Lucky would carry them carefully and bring them home safe. It’s hard not to love such an animal.

By the time I found him colicked in the barn, it was probably already too late. He’d been down for some time. I gave him an injection for the pain and walked him, but nothing worked. After a while, he lay down and refused to move. By the time the vet arrived, I’d been sitting wedged against his back for hours to prevent him from rolling and twisting his gut.

After Lucky proved unresponsive to treatment, the vet asked me a hard question: "Is this a $6,000 horse?"

He explained that there was an equine hospital over in Oklahoma that could perform potentially life-saving surgery. It cost $6,000 cash, up front. He warned that survival was chancy, and might leave my horse an invalid.

I’d paid $1,000 dollars for Lucky; he was 25 years old, almost elderly. After a long night of IV fluids and pain meds, there was no avoiding the inevitable. Because there are some things a man must do for himself, I administered a lethal injection, and ended up having to put a bullet into his brain.

We buried him in his pasture.

It was a hard, hard thing to do. This was two years ago, and it’s a rare day I don’t think about Lucky and his stable mate Rusty, who also died that year. I pray that I never out-live another horse.

Long introduction, brief polemical point: Observing Republicans gear up to try to undo "Obamacare," I suspect the only thing that will satisfy some is to make medical care in the United States work like veterinary care. You get what you can pay for. Otherwise, tough luck.

Who would have thought that after Sarah Palin’s imaginary "death panels" -- chosen by Politifacts.com, the fact-checking website, as its 2009 "Lie of the Year" -- Arizona Republicans would be denying heart, lung and liver transplants to Medicaid patients because Gov. Jan Brewer says the state can’t afford them?

To save a lousy $1.4 million (out of a $9 billion budget), Arizona’s Health Care Cost Containment System has decreed an end to organ transplants. Maybe the bitterest irony is that the inhumane policy won’t actually save any money. One of the roughly 100 citizens affected explained to Arizona Republic columnist E.J. Montini:

"I can’t work anymore, and we ran out of (insurance) coverage a while back," he said. "It’s terrible needing help. It’s not what I wanted. But when you run out of money, what can you do? If I don’t get a transplant, I guess the state won’t have to pay for me or worry about me until I walk into an emergency room close to dying. They can’t turn me away then."

No, they can’t. Human hospitals can’t refuse patients for lack of cash. Meanwhile, not a peep of protest from Palin, Rep. John Boehner or any of the Republicans who waxed hysterical over the absurd allegation that "Obamacare" would lead to government-sponsored euthanasia.

But if people die for lack money, that’s the GOP way.

Too bitter? Maybe so. Nevertheless, avoiding medical and economic reality has been the party’s response ever since Obama adopted much of the conservative Heritage Foundation’s health care proposals as his own. It’s all to do with partisanship, nothing else. Consider the legalistic, angels-on-the-head-of-a-pin arguments GOP savants have made against the bill’s unpopular health insurance mandate.

Precisely BECAUSE hospitals can’t turn patients away, it’s impossible to make private insurance companies cover preexisting conditions (i.e. sick people) without encouraging deadbeats to game the system by not buying insurance until they need it. This defeats the whole purpose of a risk pool.

Somebody’s got to pay, and absent an insurance mandate, that somebody’s you -- one reason the U.S. has long had the most expensive, least efficient health care system in the known world.

Ah, but in GOP Dreamworld, everybody’s Huck Finn, an independent actor in a 19th-century free enterprise paradise. They claim the Constitution forbids government from making citizens buy something they don’t want. As if refusing health insurance were like refusing Lady Gaga CDs.

Alas, in the real world, people can’t not participate in the health care system. Sure, theoretically, Huck could exercise his Second Amendment right to shoot himself in the foot and refuse treatment. That is, until delirium set in and somebody carried him into a hospital.

Then, unlike poor Lucky, they’d have to treat him, and you’d have to pay.