Judith Miller: From the Times to the nuts

A former superstar reporter finds refuge among the right wing, who don't care how much she got wrong 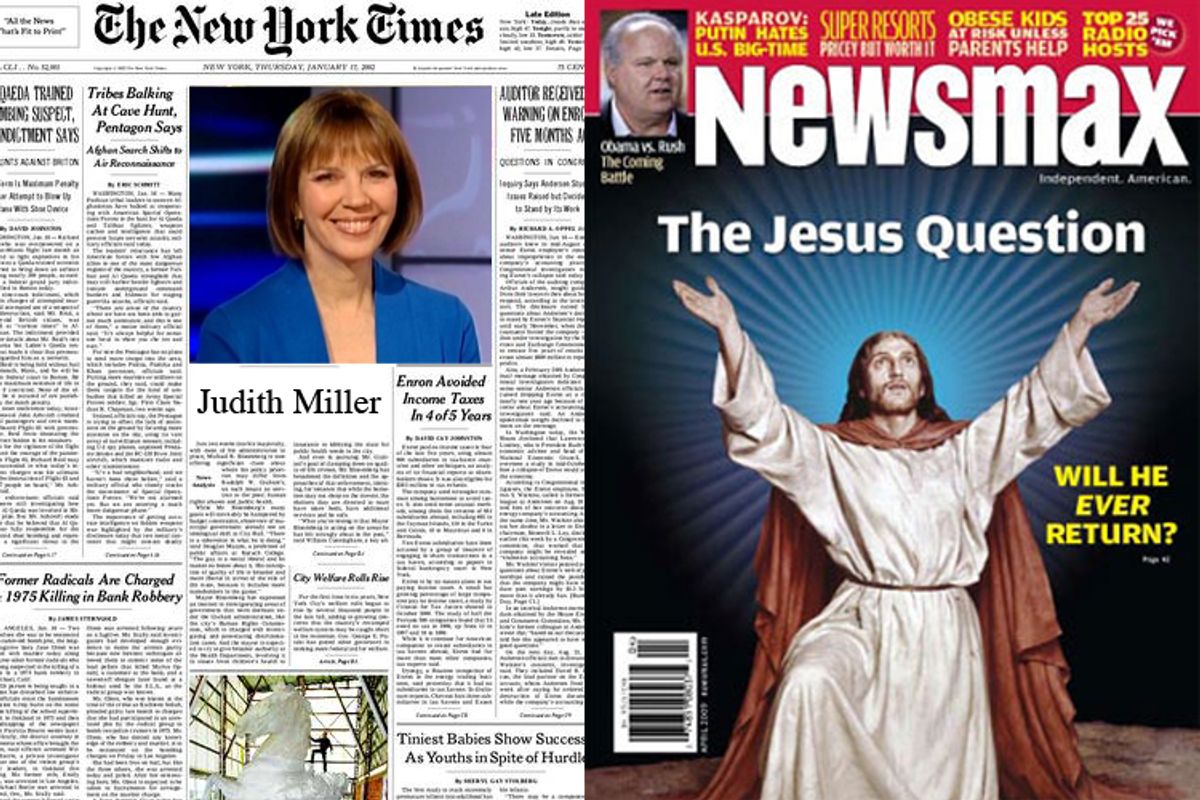 [Updated]Judith Miller used to be a superstar. She was a major reporter at the New York Times for decades -- at the DC bureau, in Cairo, in Paris, special correspondent to the Persian Gulf, embedded with a special unit in Iraq. She had the best sources. She had amazing scoops. Now she's writing -- on contract, not full-time -- for Newsmax, a goofy right-wing magazine where conservatives you've never heard of (and John Stossel, apparently) report, constantly, that Barack Obama is bad and unpopular. It's a steep fall, and it couldn't have happened to a worse journalist.

Since her early days at the Times, when she inserted CIA misinformation into a piece on Libya, she's always been a tool of power. She was the voice of the Defense Department, embedded at the Times. She was hyping bullshit stories about Iraq's WMD capabilities as far back as 1998, and in the run-up to the war, her front-page scoops were cited by the Bush administration as evidence that Saddam needed to be taken out, right away.

Lying exile grifter Ahmad Chalabi fed her the worst of the nonsense designed to push America into toppling Saddam Hussein (and giving Iraq to him), and she pushed that nonsense into the newspaper of record. She got everything wrong, and for some insane reason, she remained employed at the Times until 2005, when she negotiated her separation from her longtime professional home.

There was also the extended farce in which she went to jail to "protect" Scooter Libby, who had given her permission to "reveal" his role in the leak of CIA operative Valerie Plame's name, which did net her some sort of "First Amendment award" (for excellence in the field of comforting the powerful), and finally embarrassed the Times enough to get rid of her.

At that point, she ensconced herself in a right-wing think tank, and occasionally appeared on Fox. When no one else would have her, because she's a bad journalist (and, reportedly, a rude and unpleasant person), the right-wing media welcomed her.

And now she writes for Newsmax, also the home of this guy with an eyepatch who calls himself a "global economic warrior" and used to be married to Peggy Noonan.

It's a profitable site, but not a particularly respectable one. Where other political magazines attempt to make money by attracting readers with interesting or provocative content, Newsmax achieved profitability in part through means that have sparked controversy. (To be fair, the Times is ripping off its subscribers in other ways.)

While someone who's wrong about everything is an odd hire for any magazine, even one that exists mostly to sell old people Acai berries, Judith Miller, you must remember, was fired by the liberal New York Times. If liberals hate her, Fox and Newsmax will have her, no matter her sins.

But this must still be galling to Judith. Becoming a right-wing martyr is generally a pretty good career move -- it'll make Juan Williams a millionaire -- but Judy Miller is used to the respect afforded a New York Times foreign correspondent superstar. Filing a piece from Iraq to a wingnut's pet newsletter is probably not how she envisioned her career shaping up.

But it works for me.

Update: We have altered the language of this post after several media outlets amended their coverage and we received a request from Newsmax. We never intended to imply that their business practices violate any laws.