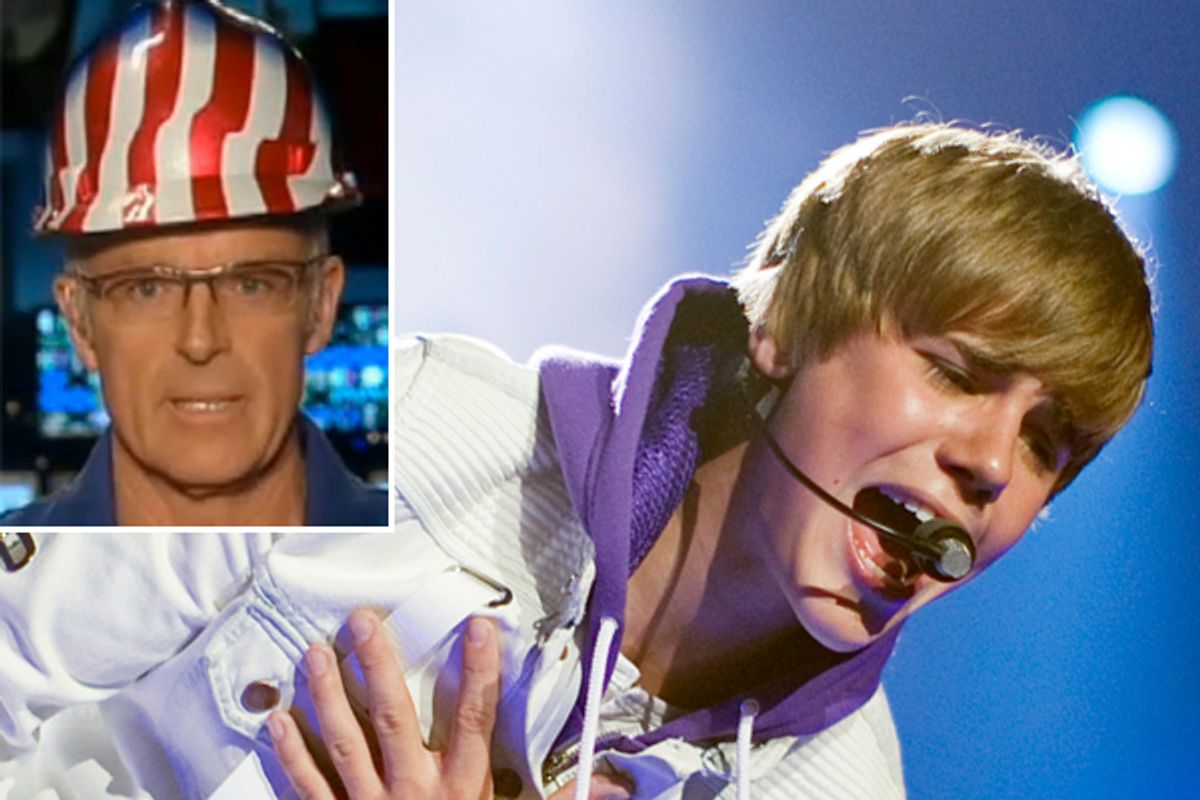 Andy Sullivan, a construction worker and Brooklyn native, has been one of the loudest opponents of Park51, the planned mosque and community center near ground zero. Founder of the 9/11 Hard Hat Pledge -- under which construction workers vow not to work at the mosque site -- Sullivan has been a regular presence on television, known for wearing his signature American flag hard hat and talking tough about radical Muslims.

So it was quite a surprise this month to read that Sullivan has set his sights on a new target: Canadian teen pop superstar Justin Bieber.

Mosque foes recently started a boycott of Bieber after he made comments in support of the mosque project in an interview with Tiger Beat, a teen fan magazine, Sullivan told WYNC earlier this month. Now, his 8-year-old daughter and 11-year-old son have been banned from attending Bieber performances.

"I informed them, 'Hey guys, guess what? Justin Bieber spoke out for the ground zero mosque," Sullivan explained to Salon in an interview. "My little girl took down his poster and said she didn't want to have nothing to do with him anymore. These are my kids. They're living this thing."

A Facebook page has been set up by an ally of Sullivan publicizing the boycott of Bieber and several other pro-mosque celebrities. It has attracted nearly 500 fans.

Intrigued by the idea that Bieber would weigh in on one of the most polarizing political issues of the day, I began looking for his interview with Tiger Beat.

The magazine does cover Bieber obsessively ("Justin Bieber Dodges Dating Selena Gomez Question!" and "Did Justin Bieber Grow a Mustache?" are two recent features). But I couldn't find any sign of an interview on Park51. There is, however, a post on the website CelebJihad.com purporting to describe a Tiger Beat interview. It reads in part:

In an interview with Tiger Beat, the pop sensation stressed that freedom of religion is what makes America great, and went on to say that those who oppose the Mosque are motivated by bigotry.

“Muslims should be allowed to build a mosque anywhere they want,” the singer said. “Coming from Canada, I’m not used to this level of intolerance, eh.”

Bieber went on to say that Muslims are “super cool,” Christians are “lame-o-rama,” and that the mosque will help “start a dialogue” with all religions about which Justin Bieber song is the most awesome.

“I was like seven when September 11th went down, and frankly I’m surprised people are still going on about it. Move on, already!”

I was able to reach the proprietor of the site, who confirmed that the Bieber item is in fact a hoax. "[T]he fact that some people take it seriously is hilariously depressing," he said in an e-mail.

It's a hoax, though, that has spread around the Web, and succeeded in taking in several anti-mosque activists. They recently discussed the issue on the wall of the Facebook boycott page:

Megan Alpert: Why is Justin Beiber on Boycott companies for ground zero?? He's a kid. lol

Cynthia Bloemer: That stupid dhimmi kid spoke out for the Mosque. Idiot kid!

Megan Alpert: That's crazy Cynthia. I totally missed that all together.

Administrator: Justin took an adult position and spoke out in support of the mosque in tigar beat magazine. He one of the most influential teen sensations, reaching millions of impressionable kids. If he is going to play like the big boys he better expect some back lash...

Megan Alpert: Well then he is leading all the young teens into a funny way of thinking. He was just a baby when the attack came upon us. He has no clue what we are up against. He is very lost.

Walter H Steinlauf: Justin Beiber is "fishing in DEEP water" now. I eat people like that for breakfast.

Bieber's publicist did not immediately return a message seeking comment about the hoax and Bieber's views on the mosque.